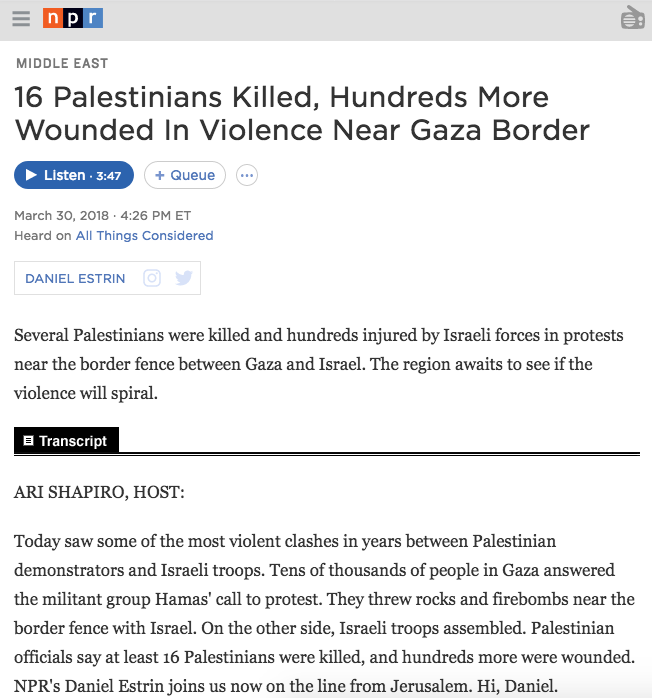 NPR, as FAIR has noted throughout the years (e.g., 8/14/01, 11/01, 2/5/02, 11/15/12, 10/10/14), takes a default pro-Israel line when reporting on the affairs of Israel/Palestine. Its correspondents almost always live in West Jerusalem or in Israel proper, are rarely Palestinian or Arab, and they work consistently to deflect blame for Israeli violence—either shifting blame onto Palestinian victims or dispersing it through false parity.

A segment from Friday (All Things Considered, 3/30/18) on Israel’s killing of  Gaza protesters provides a case study in this process. NPR host Ari Shapiro set up the segment, an interview with reporter Daniel Estrin, by blaming the 17 dead and hundreds of injured Palestinians on “the militant group Hamas,” framing Israel as totally defensive. From the very first line, blame is deflected from the Israeli military:

Today saw some of the most violent clashes in years between Palestinian demonstrators and Israeli troops.

We do not have one party’s snipers opening fire on another, unarmed party; we have “violent clashes”—a term, as FAIR (8/12/17) has noted before, that implies symmetry of forces and is often used to launder responsibility. The whitewashing got worse from there:

Tens of thousands of people in Gaza answered the militant group Hamas’ call to protest.

Palestinians have no organic reasons for wanting to protest the occupation of their homes; the whole thing was a top-down decree from “the militant group” Hamas.

They threw rocks and firebombs near the border fence with Israel. On the other side, Israeli troops assembled.

This conveys the impression the Israeli military was just sitting around, minding its own business, when it was aggressively attacked by hundreds of Palestinians, then responded to this assault.

The “firebombs” claim is repeated later in the piece by Estrin himself: “Israel responded to Palestinians throwing rocks, firebombs, burning tires.” This isn’t qualified with “according to the IDF” or “the Israeli government”—even though as of now, there’s no independent evidence firebombs were used, much less used before any sniper fire from Israel.

The issue isn’t trivial: The matter of first blood when it comes to the  Palestinian/Israeli “conflict” is a crucial one (FAIR.org, 12/8/17); framing Israel as always responding to threats, rather than inflicting aggressive violence on an occupied people, is a critical difference. And subtle framing devices like “clashes,” distorting timelines of who did what, or morphing IDF claims of “firebombs” into fact are how media keep this myth alive, and further delegitimize Palestinian resistance. (It should be borne in mind that opposition to occupation, even armed opposition, is a right guaranteed by international law.)

When FAIR pointed out to Estrin on Twitter that he had reported the “firebombs” as fact and not a claim by the IDF, he responded, “I reported the firebombs as an Israeli claim.” When FAIR showed evidence he and host Shapiro had done the opposite, Estrin deflected: “Be kind; it’s live radio.”

“Explain why this violence broke out today,” host Shapiro asked. It’s not a massacre or an attack or “firing on protesters,” as it is when official US enemies do it; it’s simply “violence breaking out.”

And it was billed as an independent Palestinian protest campaign. But actually Hamas, which controls Gaza, was a driving force.

This effectively militarized the whole of the protest, treating it not as an outpouring of popular grievances but as an operation quarterbacked by “a militant group.” This is where Estrin asserted the protesters used “firebombs” without attributing the claim to the Israeli attackers. Instead, he cited the IDF as a source on crowd size:

And according to the Israeli army, there were more than 30,000 Palestinians at six different spots along the border. Israel responded to Palestinians throwing rocks, firebombs, burning tires. Israel fired tear gas and live fire. It was the most violence in Gaza since the Gaza War in 2014.

A brief mention of the dire humanitarian situation in Gaza was thrown in, but it is blamed on an “ongoing internal Palestinian political fight” that has made the situation “even worse.” Estrin then erroneously told listeners “Hamas took control of Gaza by force a decade ago,” when Hamas actually gained power in Gaza in 2006 through an internationally recognized election. In 2007, Hamas won a civil war with US-backed Fatah, the faction it had defeated in the election, but to say Hamas “took control of Gaza by force” falsely paints it as an usurping force with no legitimate authority.

Asked what will happen next, Estrin shrugged and says more of the same, and that is it.

It’s a brief report, but a highly revealing one: Hamas is at fault, the Palestinians threw “firebombs” first, then the Israeli army “assembled.” The illegitimate Hamas astroturfed the protest, the people are being exploited. Israel just killed those 17 protesters in self-defense.