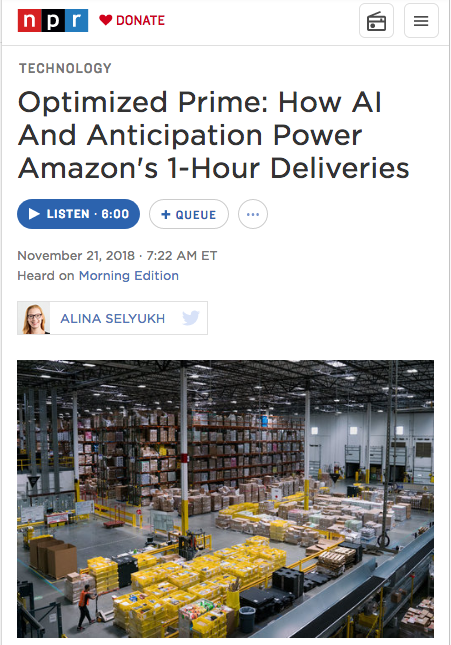 And now, a word from our sponsor: Morning Edition‘s segment (11/21/18) on NPR-underwriter Amazon is sourced entirely to Amazon.

There are dozens of reports detailing how Amazon’s shipping policies negatively effects both the environment and workers, but one wouldn’t have any idea either was a concern after  listening to NPR’s sexed-up report (Morning Edition, 11/21/18), “Optimized Prime: How AI and Anticipation Power Amazon’s 1-Hour Deliveries.”

The report, detailing the “Artificial Intelligence” behind Amazon’s delivery systems, relies entirely on interviews with Amazon flacks. The only people NPR speaks to are Brad Porter, the head of robotics for Amazon operations; Jenny Freshwater, director of software development; and Amazon VP Cem Sibay. No outside parties were sought for comment, let alone anyone remotely adversarial, such as labor organizers or environmental activists.

Indeed, the words “labor,” “worker” or “employee” are nowhere to be found in the six-minute report: Christmas packages simply deliver themselves with the help of brilliant Amazon execs and this mysterious AI technology. If Amazon’s marketing department wrote and produced a segment on their AI technology for NPR, it’s difficult to see how it would have been any different. Host Rachel Martin and correspondent Alina Selyukh all but literally exclaim “gee whiz”:

The only thing that comes vaguely close to criticism is when Selyukh points out that robotics are “controversial work in retail, where layoffs are rampant,” then goes on to insist:

Economists are divided on how much exactly AI will eliminate or create jobs, especially for lower-income Americans. In its defense, Amazon often points to how much it’s actually been hiring. To [head of robotics Brad] Porter, we are in the latest chapter of industrialization.

What economists? What does “latest chapter of industrialization” even mean? NPR, using Amazon’s spokespeople and paraphrasing a nebulous cohort of “economists,” recasts “criticism,” such that it is, as a generic, sanitized critique against an industry trend presumably out of Amazon‘s control, rather than directing criticism at Amazon themselves—a employer notorious for worker abuses ranging from wage theft, Orwellian working conditions, intimidation, retaliation and union-busting.

None of these widely documented concerns—all of which make cheap two-day shipping possible—were mentioned at all. Nor were the equally well-documented environmental downsides to two-day shipping, a convenience that, despite NPR’s “oh wow, how do they do that” excitement, creates tons of gratuitous, harmful carbon emissions.

NPR did have a throwaway line about how Amazon was a “sponsor” of NPR, but it’s unclear how pointing out that the company you’re writing a press release for helped pay for the press release makes it any better. At one point, NPR’s Selyukh came so very close to making a connection between cheap, fast delivery and grinding workers down to the nub, but instead, again, threw in another AI promo:

Sibay and other Amazon executives push this illusion that fast delivery is magic. Like, the code name for Prime Now was Houdini. But the reality is [it’s] forecasting on steroids, and a meticulous shaving off of minutes and seconds on the journey of the package.

Selyukh is correct that two-day delivery isn’t “magic,” but the “reality” behind Amazon’s fast delivery time and its record-breaking $1 trillion valuation, and CEO Jeff Bezos’ record-breaking $150 billion personal fortune, isn’t just “forecasting” or smarter robotics or sexier tech (though that’s likely a small part of it), it’s what’s it’s always been: a faceless network of millions of workers—abused, neglected, overworked and underpaid—and environmental externalities the public will be mopping up for centuries. It would be good if a radio station, ostensibly set up to serve that public, could mention these inconvenient realities.