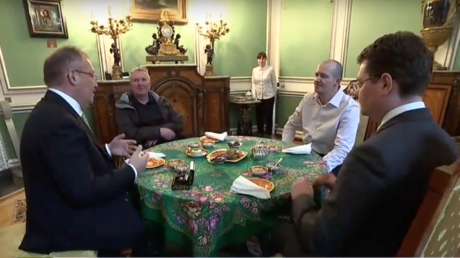 Amesbury Novichok incident survivor Charlie Rowley has met with Russia’s Ambassador in London seeking answers, after the UK authorities kept him in the dark about any official details of the poisoning saga for nearly a year.

“Most of the information they have, they had read in the newspapers. And I got the impression that both the family of Dawn Sturgess and that of Charlie Rowley have not been adequately informed as to what happened to the pair in Amesbury and what happened in Salisbury before,” Ambassador Alexander Yakovenko said after the meeting with Rowley.

They never received any official reports… [Charlie Rowley and his brother] had a lot of questions for us, and I was happy to answer all of them.

Whatever small information Moscow has managed to gather about the incidents, with a total lack of cooperation from the UK side, was passed on to the brothers – and most of it was a “total revelation” for them, Yakovenko said. “They are ordinary people, reading British newspapers. What could they know – only what they are offered by the press. So it’s good to have an alternative point of view and understand Russia’s line of reasoning.”

Rowley and his partner Sturgess were rushed to hospital from Amesbury on June 30, 2018. At first, police believed they might have overdosed on drugs, but then claimed that the couple was poisoned by Novichok, the same nerve agent allegedly used on Sergei and Yulia Skripal in Salisbury four months earlier. Sturgess died in the hospital more than a week later, while Rowley regained consciousness but has been left disabled, and has been kept in the dark regarding his case ever since.

Also on rt.com
Salisbury poisoning: One year on, still no evidence of Novichok nerve agent use disclosed to public


Despite strong words coming from the British Prime Minister Theresa May that it was “highly likely” the Russian government was behind the attack, and multiple countries slapping Russia with sanctions based on that belief, the UK government made little to no evidence public as their secretive investigation drags on for over a year.

“It’s been a year now – and we still haven’t seen any official results,” the Russian ambassador said. “What led Charlie and his brother to contact us is precisely the fact that they haven’t been able to receive anything from the British authorities.”

What the victims’ families want first and foremost is the conclusion of the probe and some official data besides endless media speculations. With other survivors, the Skripals, gone completely off the radar, they have received so little information about the course of the investigation that, at a certain point, Dawn Sturgess’s son sent a letter to the Russian President, saying he felt let down by the UK government.

Russia categorically denies having anything to do with the events in Salisbury or Amesbury last year, repeatedly offering its expertise to the British investigation, yet all Russian requests have been stonewalled by London.