Janine Jackson interviewed Shireen Al-Adeimi on Yemen reporting for the September 7, 2018, episode of CounterSpin. This is a lightly edited transcript. 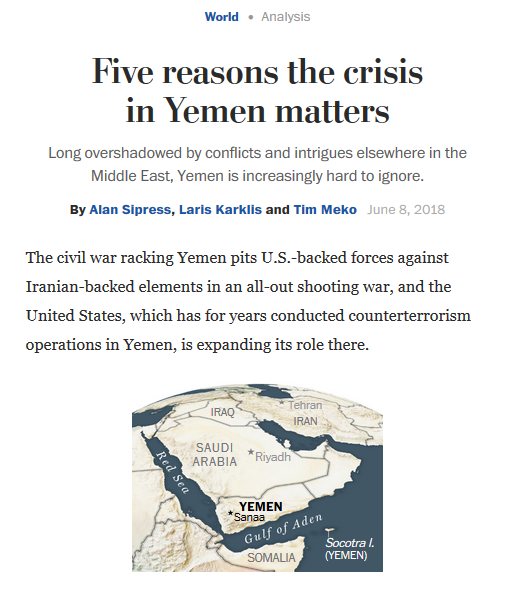 Janine Jackson: It is disheartening that with tens of thousands of people killed, millions in need of assistance, at least a million affected by the largest cholera outbreak in history, and no clear end in sight to the violence behind it all, that the Washington Post would feel a need to run a piece headed “Five Reasons the Crisis in Yemen Matters.”

Coverage is better than silence, of course, but as the war on Yemen is in its third year now, one would hope that US media would be in the business of regularly illustrating why the crisis matters, and specifically why it should matter to people in the US, whose government continues to play an active, central role in the war.

That angle has not been corporate media’s approach, more typically represented by this Reuters piece that describes the peace talks set to begin as we record this show, September 6, as

aimed at getting the Saudi-backed government and the Iranian-aligned Houthi movement to work toward halting the fighting, removing foreign forces and establishing a unity government.

US citizens are poorly served by reporting that consigns our government’s role in conflict to the background, and Yemenis, certainly, even more so.

We’re joined now by Shireen Al-Adeimi. She’s been working to bring attention to the crisis in Yemen. She’s an assistant professor of education at Michigan State University. She joins us now by phone from East Lansing. Welcome back to CounterSpin, Shireen Al-Adeimi.

Shireen Al-Adeimi: Thanks for having me.

JJ: We spoke with you last December, and the tolls of death, of displacement, of illness have only gotten worse since then. But today, we hear maybe some conversations will be had in Geneva. In terms of bringing the war on and in Yemen to an end, what would you say has changed since we spoke last winter? I want to say I see more opposition, more acknowledgement of the US responsibility, but maybe I’m just thinking wishfully.

SA: No, I think there’s definitely been more awareness, first and foremost, which has prompted, in return, more opposition to the US’s role specifically. I was surprised that I was turning on the channels and watched full coverage of the bus bombing on CNN, and that is not something that has been happening before, in any kind of consistency. And when we have had information about the war in Yemen, we have not really heard about the US’s role in the conflict, which of course is what’s keeping this conflict alive.

So I think there’s been some changes there, but unfortunately it took such a drastic turn for the worst. It took the murder of 44 schoolchildren on a school bus, coming back from a field trip, and they were bombed by the Saudi-led coalition using American weapons, and it took for that event to finally bring some kind of attention in the media, and some kind of scrutiny about the US role, but, you know, at least here we are. 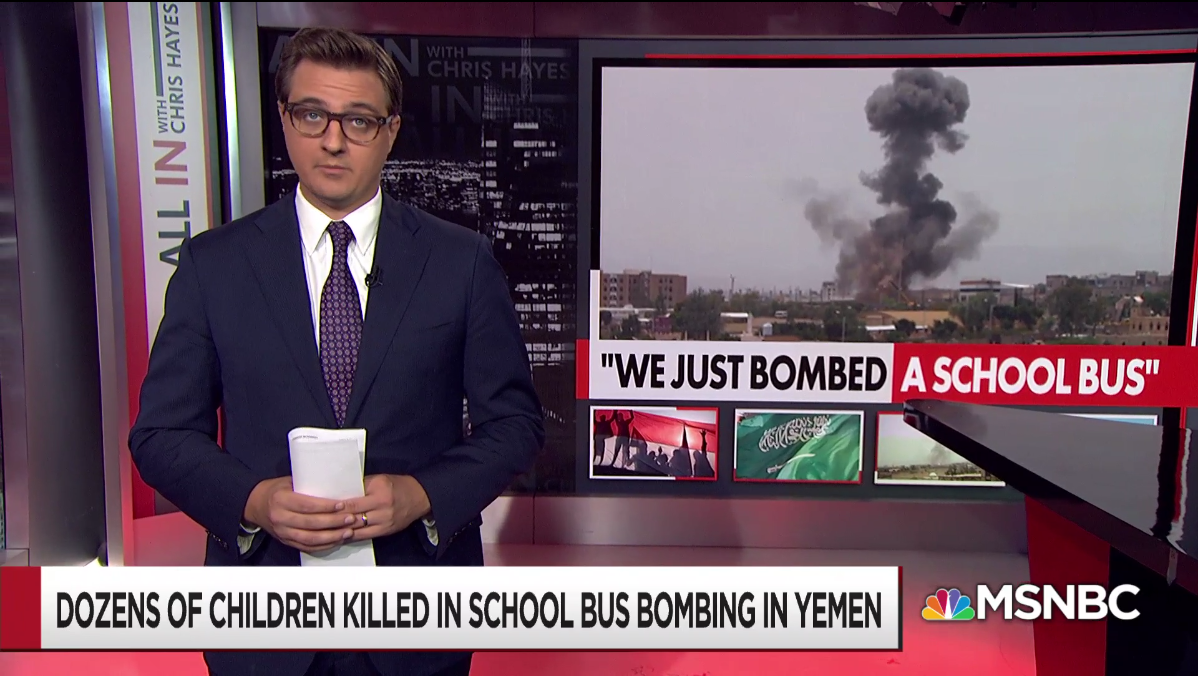 JJ: Yes, CounterSpin had reported that MSNBC, which is sometimes looked to as the “resistance media,” had gone basically a year with silence on Yemen. But then there was a very affecting piece by Chris Hayes, after that school bus attack, that did point to the role of the US, in terms of saying, “Viewers who are watching this and are upset: There is something you can do, because it is our government that is playing such a key role in supporting the Saudi coalition there.” So not just the coverage, but the acknowledgment that there’s something for US citizens to do here.

SA: Exactly, and Chris Hayes had me on his podcast, where we talked for an hour about the roots of the conflict, and specifically the US’s role, so I think, again, this is encouraging, that they’re not just talking about the conflict now as some far-away thing that’s happening, without our support or consent. We’re speaking about it as we should, which is this is a US-backed, Saudi-led conflict. 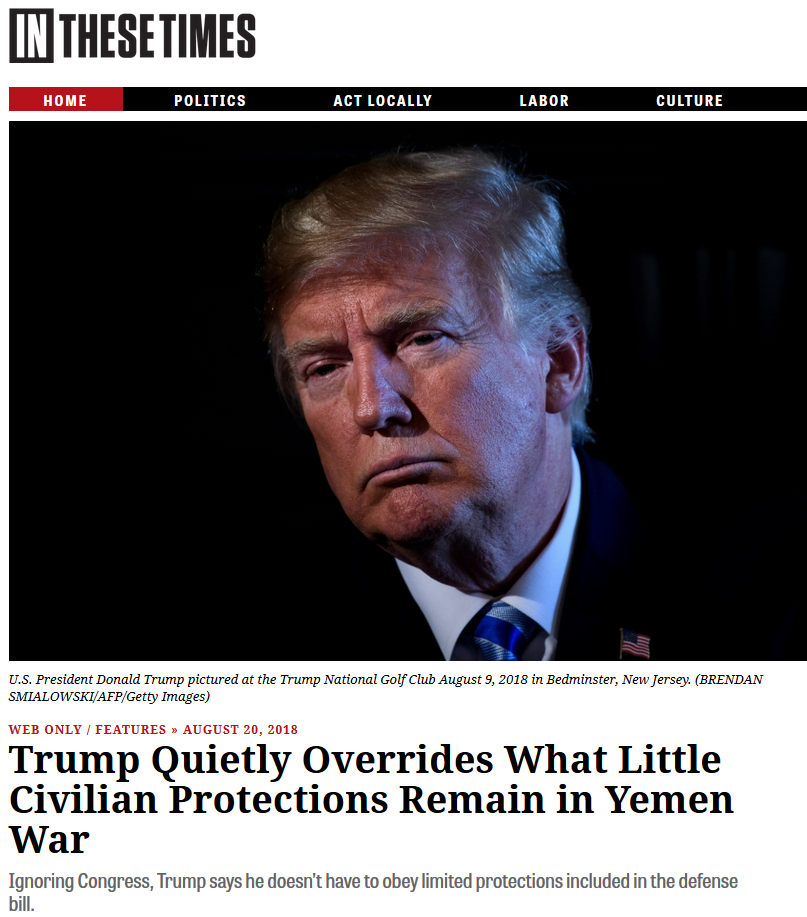 JJ: Particularly in the wake of that August 9 attack, we did hear language about protecting civilians, but talk is cheap, notoriously. You and Sarah Lazare reported for In These Times on actual moves by Donald Trump, that show the real priority that he places on civilian lives. It kind of went under most media’s radar. Can you tell us about that?

SA: Right. So Congress passed a Defense bill for 2019, the NDAA, and there were some senators and Congresspeople who had worked together to try to introduce some provisions into this Defense bill to ensure that US dollars are not spent toward refueling the Saudi-led coalition’s jets, because this is one of the main functions of the US in Yemen, trying to refuel Saudi air jets. I think the provisions were a good start. They were weak to begin with, because they included some loopholes; they mentioned that the secretary of State could just issue a waiver, and they said that mid-air refueling can continue to occur if the Saudis and Emirates are showing that they are trying to protect civilian life; this is very vague terminology, of course. The Saudis have just repeatedly said yeah, yeah, yeah, we’re not targeting civilians, and that’s been enough.

Nonetheless, there were some provisions that were there, and in his signing statement, Trump essentially said that these infringe on his rights as president, and he would just ignore them. So what is the point,  then, of including something like this, if the president could just go on and say, “Well, I’ll do what I want. I can just ignore whatever provisions are there.”

JJ: Spain, I just heard, cancelled delivery of 400 bombs that Saudi Arabia had bought, and they’re giving their money back. It seems as though this kind of, oh, our hands are tied, all we can do is sort of vaguely wave at the idea of civilian casualties… There are concrete things that the US could be doing here, if the goal were to stop the violence.

SA: One of the things that Congress has attempted twice, once in the House and once in the Senate, was introducing the War Powers Resolution, which basically is a bill which says, “Let’s vote on the US’s presence in Yemen,” and it would be binding if Congress voted for the US to stop supporting Saudi Arabia; it would be a binding bill. The one time it was introduced in the Senate, by Senator Sanders, they didn’t end up voting on the bill itself; they voted to table it. I think it was pretty close; 44 senators voted not to table it, but still. And when it was introduced in the House last year, it was stripped of its privileged status, which meant that it couldn’t even go to a vote. There wasn’t going to be a debate on it.

But actually, right this morning, about an hour ago, members of Congress, led by Adam Smith, have announced that they’re working toward another War Powers Resolution in September, and that they are trying to, again, get the US to end its support of the Saudi-led coalition in Yemen, acknowledging that there are all these civilian deaths, and that we are facilitating this war.

I think I’d just like to include again a message of empowerment, that this bill is being worked on now, to have people call their representatives in Congress, and urge them to support the bill.

JJ: What thoughts do you have about the potential for the peace talks that are meant to be starting today in Geneva?

SA: It sounds like the Houthis have not arrived yet. I read something about them not being able to secure safe return by the UN, and other things that they had said they wanted that have not been met yet. So right now, you have the Saudi-led coalition’s representative, AKA the Yemeni government, in Geneva, waiting to have these talks.

I think if the Houthis make it there, I’m hopeful that this would lead to some kind of resolution, but like you said, there’s been so much misinformation about this war, and I think it’s intentional. There’s this “Iran-allied” vocabulary that’s just now fact. It’s difficult to tell people, well, Iran is not involved in this conflict, because they’ve just taking it as fact. So we’ll see what happens, we’ll see if people are actually serious about ending this war. Of course, nothing will end if the US continues to support the Saudi Arabians, and if Saudi Arabia continues its attack on what is a sovereign country and should be respected. 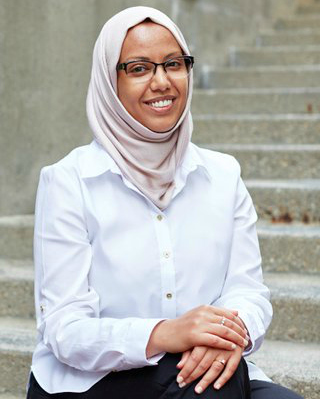 Shireen Al-Adeimi: “We’re not asking for any saviors. We’re asking for people to stop intervening in Yemen.”

JJ: Being portrayed in the media as a “humanitarian disaster,” I think can spur some people to think, “Oh, what we need to do is get in there, is intervene.” And I know I asked you this back in December;  I just would like to underscore it; Yemenis aren’t saying, “Please intervene. Please come save us.” That’s not the message out of Yemen.

SA: It’s the complete opposite. It’s that we’ve only gotten to this point because of foreign intervention. This was a civil war back in 2015; it would have started as a civil war, ended as a civil war. Yemen has seen many civil wars, and we’ve gone through it, and we’ve continued to rebuild after that, and it’s never gotten to these levels of humanitarian crises. We’re talking about the world’s worst humanitarian crisis. If it remained in Yemen as a civil war, the ports wouldn’t have been blockaded. People wouldn’t be starving. Every ten minutes, a child dies in Yemen from starvation and disease. And so we’ve only gotten to this point because of foreign intervention. So I believe, and many Yemenis who are still fighting and resisting and waiting for all of this to be over in Yemen believe that, let Yemenis solve their own problems, and we’re not asking for any saviors. We’re asking for people to stop intervening in Yemen.

SA: My pleasure. Thank you for having me.