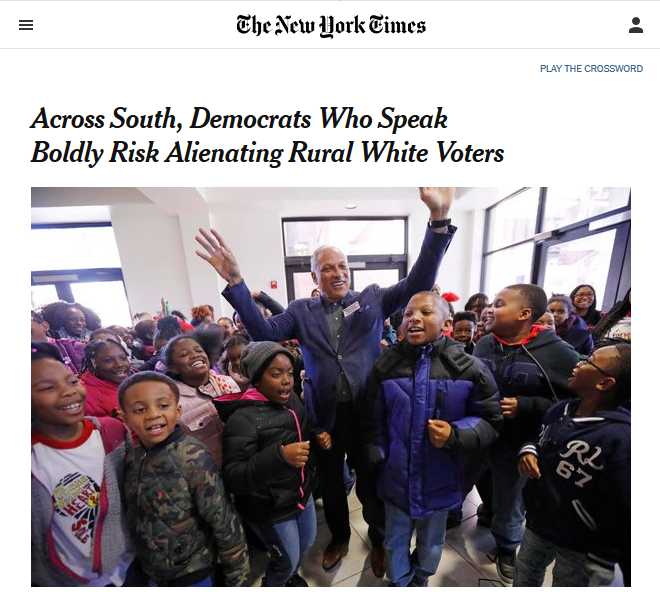 Stop me if you’ve heard this one before: During a high-profile election, a major newspaper decides to stubbornly focus its coverage on an increasingly narrow sliver of white voters, while minimizing the racism that colors the electorate and the eventual Republican victor’s campaign.

If this sounds like a repeat of the mainstream press’s response to Trump’s 2016 campaign, well, it is. But such was the case for the New York Times’ coverage of the Mississippi Senate election this past week.

On the weekend before Election Day, the Times’ Jonathan Martin (11/24/18) wrote a long campaign dispatch from Mississippi that trafficked in the paper’s ongoing obsession with this constituency. The article’s not-so-subtle title: “Across South, Democrats Who Speak Boldly Risk Alienating Rural White Voters.”

In his first paragraph, Martin did mention the ugly, chilling comment in early November when Senator Cindy Hyde-Smith said of a political supporter: “If he invited me to a public hanging, I’d be on the front row.” And he said it  “evoked the state’s racist history.”

But after that brief aside, Martin focused his narrative energies elsewhere, devoting long stretches to decrying the “conundrum” of rural white voters having abandoned the Democrats in the most recent midterm elections. The party’s massive turnout and popular vote margin in House elections from just three weeks earlier—the most lopsided in terms of total votes won since the Watergate era—along with its 40-seat net gain, were relegated to mere afterthoughts, as Martin instead chose to zero in on how the party’s “already weak standing in rural America erode[d] even further.”

But to emphasize the power of rural white voters in Mississippi—and elsewhere—without explicating that state’s long, sordid past as the lynching capital of the country does a disservice to the facts. It effectively lets Hyde-Smith off the hook for her “public hanging” comment, because it fails to make clear the full and rancid historical context of it, especially when her Democratic opponent is a black man.

The actual data is chilling. According to the NAACP, at least 581 lynchings took place in Mississippi between 1882 and 1968–one out of every eight lynchings committed nationwide during that period. And while the state did utilize hanging as capital punishment during part of this period, historian David Oshinsky noted (American Public Media, 7/3/18), “Between 1882 and 1930, Mississippi had more lynchings and fewer legal executions than any other state in the region.” The state finally ended execution by hanging in 1940, which, it is worth noting, was 19 years before Senator Hyde-Smith was born (and 24 years before the Civil Rights Act passed).

In other words, for a vast majority of the state’s history, as well as for the vast majority of Mississippians who heard Hyde-Smith’s comment, the phrase “public hangings” is inextricably linked to racist vigilante killings via lynching—whose victims were overwhelmingly black men. But Martin did not see fit to include any of this backstory in his dispatch from the campaign trail.

The Times did note that Hyde-Smith, in an awkwardly clumsy statement, gave a “I’m sorry if anyone was offended” non-apology at the debate. That was before she quickly betrayed even that small semblance of contrition by later claiming that her words had been “twisted” and unfairly “weaponized” against her. This has become an all too common rhetorical move among conservatives in the Trump era: trying to turn the tables against those who point out racism by suggesting that the label itself is worse than the action or conduct that prompted it. But rather than scrutinize this by-now naked appeal to Hyde-Smith supporters’ bigotry, and the corporate backlash it ignited, the Times pivoted to a bizarrely forced segué, one that effectively minimized her racism by helpfully contrasting it with the alleged statutory rape by recent failed Alabama Senate candidate Roy Moore:

Yet while six companies have now asked Ms. Hyde-Smith to refund their donations because of her remarks, she has not been accused of sexual impropriety with minors in the fashion of Mr. Moore.

Can’t argue with that logic, but then maybe it’s a low bar to set that Hyde-Smith can at least say she hasn’t been accused of sexually preying on underage teenage girls.

After the election, the New York Times (11/27/18) published an equally problematic election wrap-up piece. Yet again, it did not bother to interrogate the state’s racist history and how it might be connected to Hyde-Smith’s defiant tone over the “public hanging” comment and her eventual victory. Instead, a Times analysis by Alan Blinder went to great lengths to manufacture new and more contrived euphemisms to talk around the deep-seated racism that served as backstory for her comment.

As a result, Times readers were told of a “cavalier reference,” “rhetorical gaffe,” “controversial remarks,” “rhetoric seemingly steeped in Mississippi’s racist past,” which was an “anachronistic representation” that “imperiled” her campaign “through her own statements.” As far as plain-speaking journalism goes, this was an embarrassment of riches of embarrassments.

In what amounts to a microcosm of its flawed coverage, this Times story used the word “race” nine times, but only two of those appearances referred to ethnicity; the rest merely referenced the horserace. As noted above, the paper does use the word “racist” once—but only in reference to the state’s past, just as with the earlier Times piece.

That is indicative of a broader trend within the mainstream press, which is loath to use “racist” or “racism” to describe any contemporaneous rhetoric or conduct. Confronted with such moments of outright bigotry now, “objective” journalism prefers more performatively neutral adjectives like “racial,” which happens to appear twice in this Times election postmortem, one example of which is the mind-numbingly ambiguous term “racial fault lines.”

As it happens, a Boston Review essay (11/26/18) earlier this week zeroed in on the mainstream press’s troubling new fascination with muddled and denuded terms like “racially tinged” and “racial controversy.” As author Lawrence Glickman explained, this kind of “objectivity”-ization of journalistic language ultimately serves to empower and reinforce the status quo that wields race as a cudgel:

The language of “tinged” and “charged” suggests that race can be overemphasized and exaggerated, but elides the fact that any biological notion of race is a fiction, while racism is a very real language of power. Describing Trump and others in language that uses “race” as a neutral concept, whether or not intensified by “tinged” or “charged,” suggests that race can possess both positive and negative valences. This masks that, as history tells us, phrases described as “racially tinged” always involve assertions of race hierarchy, power and privilege.

This editorial pulling of punches is, unfortunately, not new at the Times. It has a dubious track record of covering up virulent racism by tiptoeing around it in its reportage. To cite but one egregious example (FAIR.org, 1/3/14), the paper went out of its way to delicately eulogize a right-wing extremist who referred to black people as “savages” and called New York City’s non-white majority “a bad thing,” slurs that the Times masked with cowardly euphemisms such as “combative” and ambiguous distortions like “controversial manner.”

By no means is this language corruption contained to its reporting on racism in politics, either. Since Trump’s election, the Times has also shown a particularly creative and maddening penchant for submerging the plain facts about the president’s consistent and unabashed lying under a deluge of watered-down synonyms. As a result, the paper’s reporting has all too often retreated into a timid, defensive crouch, walling off its readers from the plain-spoken reality of Trump’s lies and racism with both a Roget’s Thesaurus and a hidebound fascination with white, small-town voters.

Predictably, that’s where the Times landed in its lessons learned about Democrat Mike Espy’s defeat in the Mississippi Senate race. Despite Espy having outperformed Trump’s 2016 margin in the state by 10 percentage points, the paper still counseled that the best way for Democrats to win future swing states was to tack toward a cohort of voters that look and think less and less like the rest of the party. The Times archly concluded:

It was a reflection of the balance Democrats need to strike as they try to make inroads in Southern states like Georgia and Texas, where appeals to the base of African-Americans, Hispanics and moderate suburbanites could alienate rural whites.

That Democrats might be able to fashion a different-looking winning coalition in 2020—just as Obama did in 2008 and 2012—simply did not register. Nor did the prospect that entrenched racist animosity among rural white voters might make them effectively impossible to convert in sufficient numbers.

But then, this kind of myopia is an entirely expected outcome of supposedly colorblind political journalism that, in practice, remains stubbornly fixated on the fate of just one shade of the electorate to the detriment of all others.