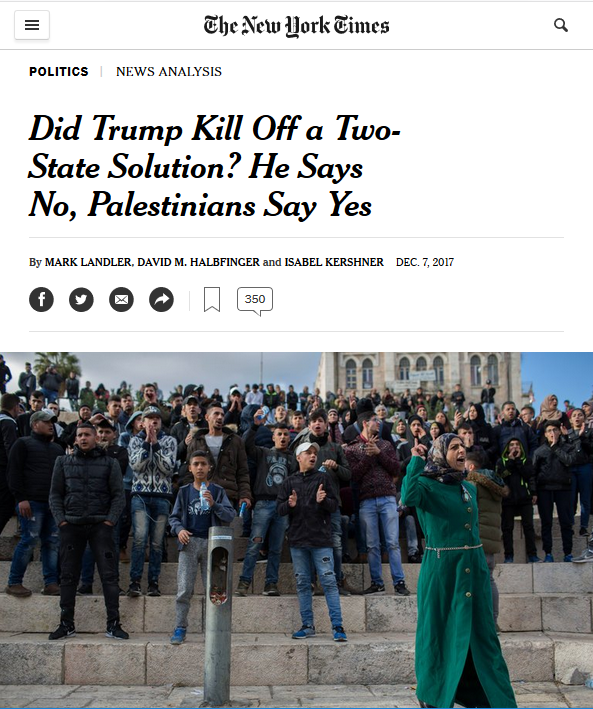 The New York Times (12/7/17) ran an article about whether Trump’s declaring Jerusalem to be the capital of Israel would eliminate the possibility of a two-state solution to the Israel/Palestine conflict. The Times’ Mark Landler, David Halbfinger and Isabel Kershner wrote that while the PLO was now saying that Israel and Palestine should be

a single state, but with Palestinians enjoying the same civil rights as Israelis, including the vote…Israel would be unlikely to accede to equal rights, because granting a vote to millions of Palestinians would eventually lead to the end of Israel as a Jewish state.

One could imagine the New York Times in the 1980s writing similarly about the ANC’s insistence on equal rights for blacks, including one person, one vote, in apartheid South Africa:

South Africa would be unlikely to accede to equal rights, because granting a vote to millions of blacks would eventually lead to the end of South Africa as a white state.

The Times could easily have written that, but it would have been wrong. It would be wrong as a prediction, of course: Under international pressure, South Africa did accede to one person, one vote, and today is a functioning multiracial democracy. But it also would have been wrong in the ethical sense for the Times to implicitly accept as normal politics a refusal to allow democracy to undermine ethnic supremacy.

It may be true, as the actual Times article states, that Israel is determined not to allow Palestinians equal rights. It certainly bolsters that determination when the United States’ most powerful paper suggests it’s a normal thing for a “Jewish state” to rule over a population that is roughly 50 percent non-Jewish.