Janine Jackson interviewed Neil deMause about Amazon and the Village Voice for the October 5, 2018, episode of CounterSpin. This is a lightly edited transcript.

Janine Jackson: Amazon got a PR boost from its announcement that, after considerable pressure, it would raise workers’ minimum wage to $15 an hour. Immediately after, we learned that the company would simultaneously be cutting monthly bonuses and stock options, such that many warehouse employees have said that they’ll actually be getting less money.

That sort of maneuver is one of the things that rubs many people wrong about Amazon, now one of the country’s largest employers, along with responding to charges of abusive conditions by having select staffers maintain Twitter accounts in which they explain, Stepford-like, how glorious it is to work there. But maybe most galling is the disjuncture between nickel-and-dimed employees, some of who report peeing in trash cans because bathroom breaks are recorded as “time off task,” while Jeff Bezos is rich as Croesus. And how is it that a company with paid employees who rely on food stamps, and that demands tremendous subsidies from communities just to locate there, can be held up by media as an exemplar of “success”?

It matters whether we label Amazon as “a success” without asterisks, and whether we’re OK with the extent of its power. One with questions on that is journalist Neil deMause. His latest book is The Brooklyn Wars, and he joins us now by phone from Brooklyn. Welcome back to CounterSpin, Neil deMause. 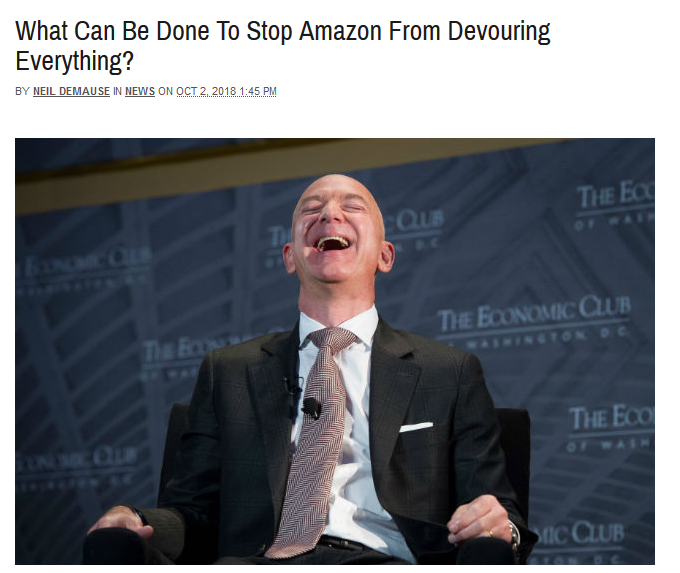 JJ: I think many people think of Amazon as a “guilty convenience.” We know the company has problems, internal and societal, so if we use it, we feel culpable. And this frustrates me: Amazon’s malfeasances are not determined by people who don’t have bookstores in their town, you know, or people who can’t physically go out to the store. But there’s the limit, and you write about this in your piece for Gothamist, the limit of seeing ourselves only as consumers. That’s our only power, is where we spend money, but it turns out not to be very much power. So I’ll just ask you the question you pose in the piece: “In the absence of a trust-buster in the White House, is there anything that mere mortals can do to reduce Amazon’s sway over our lives and pocketbooks?” And then for those who may wonder, why should we want to reduce that sway?

NdM: Yeah, it’s interesting. I mean, I certainly empathize with everyone else who looks at Amazon as a convenient pleasure. It is a phenomenal way to avoid thinking about where the best place is to get a product, where the cheapest place is to get a product, to just think, “Well, I’ve already got my Prime membership. I’ll just go to Amazon, and they’ll have it for some price that is probably OK, and the shipping’s free, so it’s great! And, look, I can go and watch a TV show while I’m there.”

But one of the interesting things is, we have this idea [that] the way to respond to corporate malfeasance in our age is to vote with our pocketbooks, right? And we’ve learned from boycott movements, and I remember, back 20 or 30 years ago, there was a spate of paperbacks that came out about how to “shop for a better world.” And it very much is the ethos of modern times that you make a statement with your dollars. 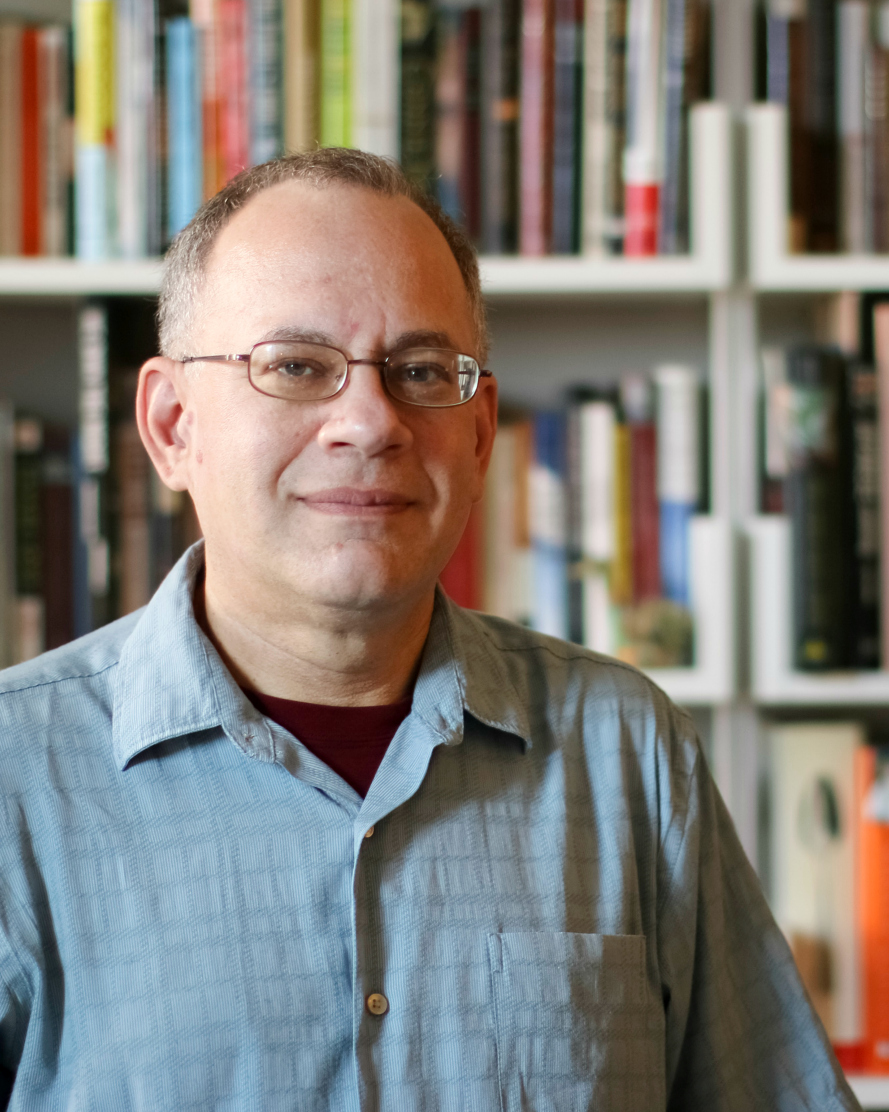 And that was not always the case. And one of the things I found interesting, in researching this article, was the degree to which that was, first of all, a response to some of the big, corporate chains like A&P, in the ’20s and ’30s, trying to get people to identify more as consumers, because they want people thinking, and voting, on the basis of, “What’s best for me for easy shopping,” not, “What’s best for me as a worker? What’s best for me as a business owner who has to compete with these chains?”

And then again, after that, starting in the ’60s, and running through the ’80s and ’90s and onto today, consumer movements as a response to our lack of political power in other ways, right? You know, “If Congress is all sold out to corporations, at least we can vote with our dollars.” The problem, of course, being that that’s not a very effective way of accomplishing things.

So one of the things that I tried to do in the article is look at both what you can do when you go to shop, but also what you can do to affect our shopping choices and our corporate world, outside of that consumer basis.

JJ: Well, yeah, so much, first of all, that’s presented as eternal is actually just historical, and there has been a shift. Now we talk about companies: Are they good companies? Are they bad companies? But it used to be that just bigness itself, just size itself, and power, was considered to be a cause for concern. 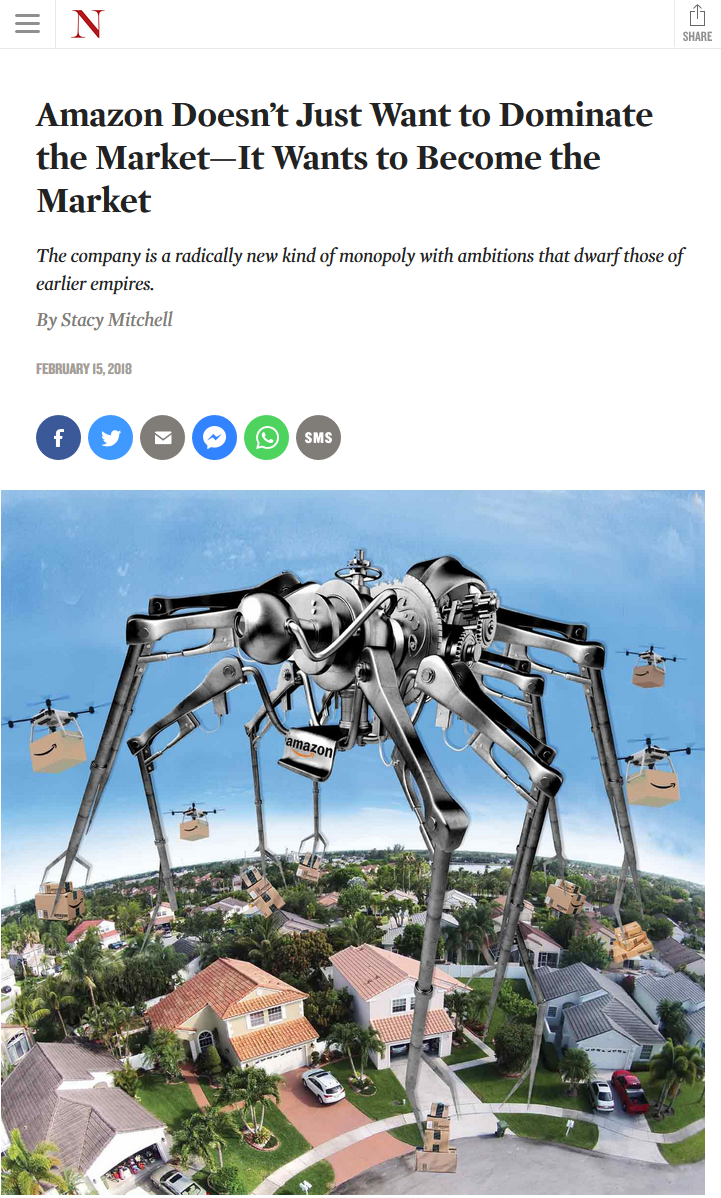 NdM: Yeah, and clearly Amazon, with this announcement this week of raising their minimum wages, is trying to cast themselves as “we’re not bad guys, we’re good guys,” right? And that shouldn’t be the point, right? I mean, it’s nice that they’re doing that. But does that mean that we should trust a company with massive control over all areas of our consuming experience and our entertainment experience and our cultural experience and the ability to compile massive amounts of data from our behaviors in all these different places? Does it make it better if they’re nicer people, rather than worse people? I mean, I guess a little bit, but really, if we’re going back to the principle that “power corrupts and absolute power corrupts absolutely,” the idea is really nobody should be trusted with that level of power, which is the whole point of the antitrust movement of the late 19th and early 20th century.

And I think one of the realizations is here—and what Stacy Mitchell was saying eloquently in my article—is that we need to not just approach this as, “How do we find the most conscientious  way to shop?” But we need to really have a return to antitrust; we really haven’t had a strong antitrust movement to break up these enormous monopolies in the last few decades and, regardless of whether it’s Democrats or Republicans in power, we really need to start pushing in that direction.

JJ: And what Stacy Mitchell from the Institute for Local Self Reliance says is that folks are starting to see that, she thinks, that there was a period where Amazon was this bright, shiny thing that made life easier, and now it’s starting to shift a bit to people recognizing that cancelling your Prime account is not necessarily going to be enough, given that, as you report, a lot of what Amazon does is out of the reach of individuals: They’re selling to public agencies, they’re selling over your head, in a sense. But there is movement afoot to talk about antitrust in a way that might make it more meaningful again.

NdM: Yeah, and the FTC is holding hearings, and there’s an antitrust caucus in Congress now, and there’s some rumblings, and I think some things like, obviously, Facebook breaches, and all the other sort of big malfeasance that we’re clearly seeing by some of these big, overarching corporations, is starting to get attention–not just from consumer advocates of the world, but also in Congress and other places.

But it’s going to have to be a big push, obviously, right? Because Amazon and companies like that have the ability not just to lobby like crazy, but also to do things like try to undercut opposition by suddenly saying, “Hey! We’re going to raise our minimum wages,” which, again, is not nothing, but it’s an attempt to deflect, right? An attempt to get people off their backs. I think something that is going to be a battle, not just over the next year or two, but over the next decade or two, is to really sort of try and push back. Again, in the same way that it took decades to fight the power of the monopolies, whether railroads or whoever, Standard Oil, back in the late 19th and early 20th centuries. 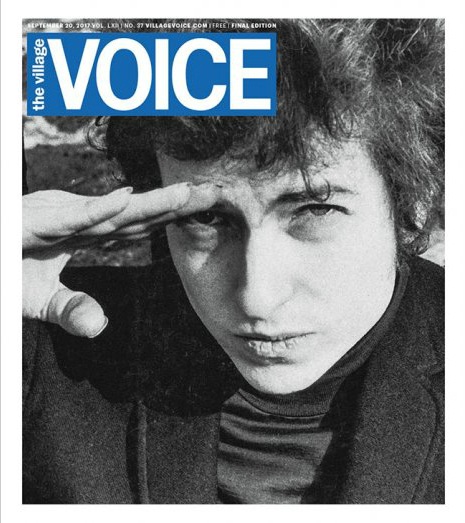 JJ: And probably now, as well as then, investigative journalism is going to play a role, and that leads me to a segue. You were, until recently, the news editor at the Village Voice, launched in 1955, the first alternative news weekly. The Village Voice has ceased publication, and that has a lot of meaning for some of us. I’d just like to ask you—certainly it changed over its history, certainly it means different things to different people—what did the Village Voice mean for you, and what do you think its closure means for the city?

NdM: Yeah, there’s been a lot of talk, in the same way there is in a lot of things these days, especially in New York, about, “Well, the Voice wasn’t what it used to be, anyway.” You know, what in journalism is right now?

I had written for the Voice for 20 years, and been editor there the last couple. One of the things that I really realized, the more time I spent working on the Voice, was the special role that it really had to play in terms of being a real alternative to the corporate media, and some of what you see in other outlets. It really was the predecessor of a lot of the sort of bloggy things, like Gothamist, for example, which does a great job, but the Voice really had an ability, and sort of ethos, of trying to be both the funniest and wittiest people in the room, and also the smartest and the most serious about the journalism. I think it’s something that I’d like to think that we carried out until the bitter end.

And I’m obviously writing for other places right now, and other people who contributed to the Voice are going to continue to do that, too. But I hope that there will still be room for that kind of journalism in the world. You know, stuff that makes us laugh, but at the same time stuff that really does the best at what investigative journalism is supposed to do; not just giant articles trying to win Pulitzers, but really exposing the dynamics of power, and exposing what we need to do in order to change our world for the better. So I am very sad to see the Voice go, not just as a staffer and as a writer, but as a reader of it, and I hope that people who are thinking of journalistic endeavors in the future try and find a way to make that sort of project work again, because I think it’s what we still very much need.

JJ: We’ve been speaking with Neil deMause. His latest book is The Brooklyn Wars, and you can find his article, “What Can Be Done to Stop Amazon From Devouring Everything,” online at Gothamist.com. Neil deMause, thank you so much for joining us this week on CounterSpin.