President Donald Trump has called himself the greatest friend of religious communities in the history of the US, but the rousing braggadocio did not appear to convince Twitter, where many users reacted with outrage and sarcasm.

“Nobody has done more for Christians or evangelicals or frankly religion than I have,” Trump told the Christian Broadcasting Network (CBN) while aboard Air Force One. The president was in fact answering a question on whether he believed that American evangelicals would support him at the forthcoming midterms – but quickly ended up declaring himself the greatest champion of religion in US history. 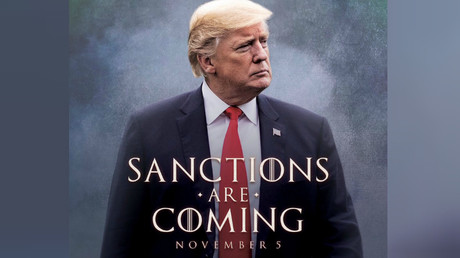 He went on to clarify by referring to his desire to “totally destroy” the 1954 Johnson Amendment, which bans religious organizations from endorsing political candidates under the threat of losing their tax-exempt status. He’s never actually managed to fulfill that desire as the revocation of the amendment has not been included in tax legislation until now.

Eventually, he had to confine himself to an executive order saying that “churches should not be found guilty of implied endorsements where secular organizations would not be.” What Trump also called an accomplishment was his decision to reinstate the so-called Mexico City policy, which blocks federal funding to NGOs that promote abortion in any way.

His arguments, however, appeared to be not particularly convincing to critics on Twitter in view of his other policies, as they slammed and mocked his statement in various ways. Many outright said they believe Trump did just the opposite to helping religion, while some even called him a blasphemer.

Yeah tRump has done a lot for religion: radicalized people against Christians, Jews and Muslims; turned the word “Christian” into a political instead of faith statement; made people afraid of conservatives who now preach fear, inaccuracies, politics and war rather than peace. https://t.co/C7xnUT7BSk

@realDonaldTrump “Nobody has done more for religion than I have.” You are evil and ignorant. You have no idea what religion is. You might try practicing being the “Christian” you have fooled some into believing you are. pic.twitter.com/R8acUrGO5r

Others took a more sarcastic approach to the issue as they agreed with Trump that he indeed did a lot for religion… but not necessarily for the better.

I agree with Trump, actually. He has done the most damage and harm to Christianity and religion. He has shown the true bigoted nature of the evangelicals. So, albiet negativity, no one’s done more https://t.co/CrOa8gdjIl

Meanwhile, some said Trump might not be all that wrong as his policies around the world have made more people, including even atheists, to pray “a lot more than they used to.”

Trump said that “Nobody has done more for religion” than he has.

Well people are surely praying a hell of a lot more than they used to.

Trump says he’s ” done more for religion than anyone else ” …. might be true … he’s even got atheists praying he won’t incinerate the planet

There were also those that decided that the statement was actually a result of Trump’s delusion of grandeur and believed he decided to declare himself greater than Jesus.

Trump to Christian Broadcasting on Air Force One: “Nobody’s done more for Christians or evangelicals or frankly religion than I have.”

“Nobody’s done more for Christians or evangelicals or, frankly, religion than I have,” Trump said.
Look, it’s Jesus Christ himself!
Insert eye roll.

People who have done most for religion, according to Trump:

However bizarre-sounding, the claim appears to be nothing out of the ordinary for Trump, who routinely enjoys exaggerating his achievements and has already got the whole UN General Assembly laughing at his braggadocio. Of course, the upcoming November 6 midterm elections have only intensified the habit, with the latest Trump’s tweet saying that “at least everybody admits that my lines and crowds are far bigger than Barack Obama’s.”