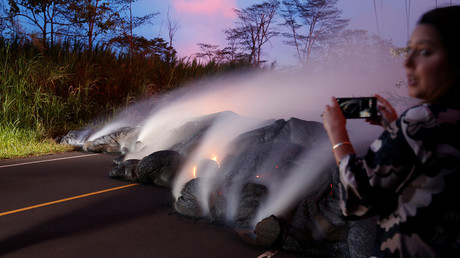 It’s official: you are advised not to roast marshmallows over an erupting volcanic vent, so call off that camping trip you were planning. Hot dogs are still an open question, though.

One intrepid Twitter user has finally voiced what many surely have thought about before: the idea of roasting marshmallows over an active volcano. One of those is conveniently erupting right now in Hawaii, chasing thousands of people out of their homes and destroying roads and properties.

The question turned out relevant enough that the United States Geological Survey (USGS) volcano-watch branch thought it would reply and set matters straight: no. No, it’s not safe to roast marshmallows over a volcano.

Erm…we’re going to have to say no, that’s not safe. (Please don’t try!) If the vent is emitting a lot of SO2 or H2S, they would taste BAD. And if you add sulfuric acid (in vog, for example) to sugar, you get a pretty spectacular reaction.

Even if you did somehow dodge the lava flows and don’t burst into flames from the sheer heat of the air (the original poster actually suggests having a long enough stick for that), the resulting roasted marshmallow would most likely be foul and potentially poisonous. That’s because volcanoes emit dangerous gases like sulfur dioxide (SO2) or hydrogen sulfide (H2S), which don’t exactly smell pleasant.

There’s also sulfuric acid, which, USGS warns, could cause “spectacular reaction” if added to the sugar. Like this:

So unless you want your marshmallow to become a nauseating, swollen black mass of infernal goo, don’t roast it over a volcano. Even if you have a really, really long stick. Hot dogs might still be OK, though! At least the USGS hasn’t ruled on those yet.