The UK’s embassy in Washington has been forced to backpedal on plans to host the government’s inquiry into fake news, over fears that the audit might offend US President Donald Trump.

MPs from the Digital, Culture, Media and Sport Committee were set to arrive in the American capital for the inquiry on February 8, but barely a week out from the planned meeting they were informed by Foreign Office Minister Alan Duncan that they would have to find a new venue. The fake news probe was to be the first public hearing of a House of Commons select committee and live broadcast held outside of the UK.

“We had a report back … that either the embassy or the UK government felt this would be unhelpful because of the relationship with the US government,” said Ian Lucas, one of the committee members.

Another member, who asked not to be named, told the Guardian that diplomats feared that the hearings could anger Trump, potentially jeopardizing relationship with UK PM Theresa May, due to his focus on ‘fake news’.

“The embassy had been booked for the evidence sessions by staff there, but as the visit got closer it became clear that the ambassador was quite sensitive, because of the president, to the whole issue of ‘fake news’,” the source said.

“There was no intention in the evidence of focusing on Donald Trump, but I personally do understand the ambassador’s sensitivity because he’s got a job to do and there has been quite a bit of friction between Trump and Theresa May.” He added that George Washington University was a better venue, and “not hard to find.”

The Foreign Office confirmed that it wanted to keep a distance between its diplomats and the parliamentary inquiry. 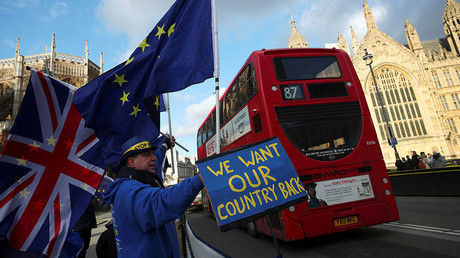 “Given the independence of the committee and its inquiry from the government, it would not have been appropriate to hold public evidence sessions in the residence,” a spokesman said. However the spokesman denied that the embassy had made a last-minute reversal, saying use of the embassy had never been “agreed” to.

The UK embassy’s last-minute decision to dump the fake news audit was slammed by the Labour MP Ian Murray, who labeled the move “embarrassing,” according to the Guardian.

“The fact that our own elected MPs weren’t able to hold a committee meeting at the UK embassy in Washington, DC, because of fears it would upset the president is, frankly, embarrassing,” he said.

Murray, who is a supporter of the Open Britain, a campaign against a hard, destructive Brexit, added, “People didn’t vote for Brexit just so we could cozy up to Donald Trump.”

The UK government has sought to bolster ties with the President since his 2016 election, with the hopes of locking in a post-Brexit trade deal with the US. In recent months the UK-US special relationship has soured after Trump attacked London Mayor Sadiq Khan, retweeted videos posted by the far-right Britain First group Britain First, then attacked May after she criticized the move.