Washington’s arch-bully, soon-to-be-ex UN ambassador Nikki Haley has demanded the Saudi crown prince stop acting so “thuggish” – perhaps because she can’t stand competition, having asserted herself around the hood many times.

Haley was quick to qualify her request that Prince Mohammed bin Salman “lose the thuggish nature in which he has been acting” with praise for the Saudi leader, whom the CIA and most other countries’ governments hold responsible for the gruesome murder of Saudi journalist Jamal Khashoggi at the country’s Istanbul consulate. He’s “careless at times,” but he has “a lot of good ideas,” she stressed. 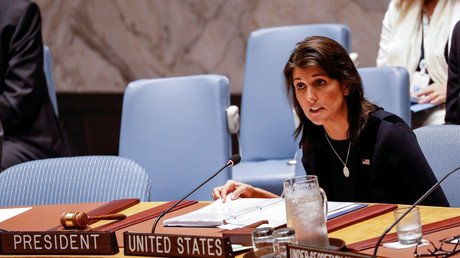 MBS merely “owes us some accountability for what happened to Khashoggi. Without question,” Haley told the Washington Examiner, seemingly offering the Saudi prince a roadmap back to America’s good graces… which is understandable – who if not Haley to feel empathy for a fellow “thug“?

After all, during her brief but colorful career at the UN, thuggish behavior has been Haley’s bread and butter.

Displaying enviable psychic powers, she threatened the Syrian government with retaliation for a chemical attack on Idlib that never took place:

“If there are chemical weapons that are used, we know exactly who’s going to use them.”

And she was not content to limit her threats to Syria:

“We told the Syrians, the Russians, and the Iranians, look twice. We have warned you not to use chemical weapons, twice you have used it and twice President Trump has acted. Don’t test us again.”

“If Assad, Russia, and Iran continue down the path they are on, the consequences will be dire.”

“When a country can come interfere in another country’s elections, that is warfare. … This is [Russia’s] weapon of choice and we have to make sure we get in front of it.”

Russia gets under her skin so much she’d rather sabotage her boss’ meeting with its president than miss a chance to throw shade:


Other victims of her bullying include North Korea, which had the nerve to test a missile:

“If war comes, make no mistake, the North Korean regime will be utterly destroyed.”

“The United States is not looking for a fight, so don’t give us a reason to have one.”

…and Venezuela, which had the nerve to test socialism:

…and the media, which had the nerve to ask her whether she pulled strings to get her daughter a government job:

“The media is not allowed to talk to me about my children.”

Not content to warmonger for the US alone, she tried to bully the entire world into war against Iran:

“The weapons might as well have had ‘Made in Iran’ stickers all over them. The United States stands ready to share what we know to further the cause of peace. We ask our friends and our allies to do the same…We must speak with one voice in exposing the regime for what it is, a threat to the peace and security of the entire world. We call on all nations to join us, in a united front, resisting this global threat.“

Haley’s thuggishness shone so bright as she trashed the UN for opposing the move of the US embassy to Jerusalem, the Israeli army thanked her for her service.

Also on rt.com
Have you been nice or naughty to US this year? Washington again threatens UN voting poopers

…and she was on the front lines when the US left the UN Human Rights Council, ready with one more shot:

“For too long the human rights council has been a protector of human rights abusers and a cesspool of political bias.”

Haley and MBS are ultimately kindred spirits politically as well as temperamentally. The Saudi prince, after all, is the one who said Palestinians should just “shut up” and “stop complaining” earlier this year – an idea Haley echoed in her final speech to the UN.