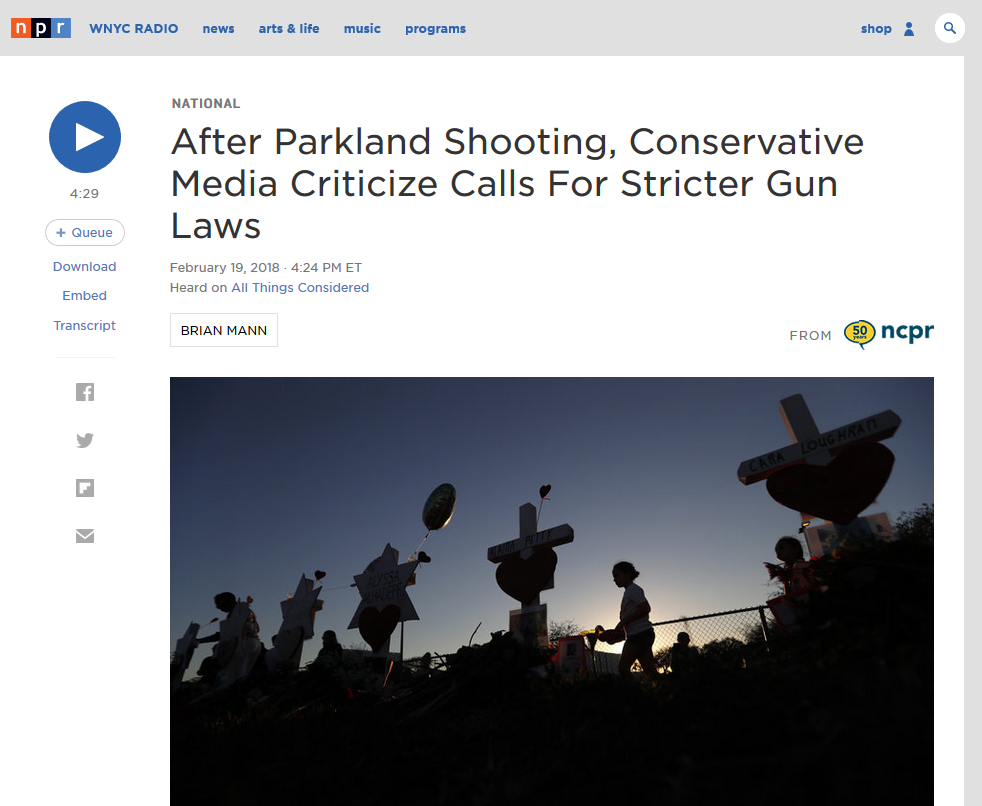 After yet another school massacre, NPR News (2/19/18) turns to gun expert Rush Limbaugh: “We need concealed carry in these schools.”

If a measles epidemic were sweeping the nation, with a mounting death toll of children, it’s unlikely that NPR News would respond by bringing on Jenny McCarthy to explain why vaccination wouldn’t save lives. And if they did feature her or other anti-vaccination voices, you can be fairly sure that NPR would follow up with experts expressing the scientific consensus that vaccines do in fact limit the spread of infectious diseases.

But when it came to reporting on the epidemic of mass shootings, All Things Considered (2/19/18) gave a platform to the gun debate’s equivalents of anti-vaxxers, in a segment that gave no scrutiny to their claim that more guns are the solution to gun violence.

NPR quoted Rush Limbaugh on Fox News Sunday (2/18/18): “The solution, to me and I know this is going to cause all kinds of angst, the solution is we need concealed carry in these schools.” And Fox‘s Tucker Carlson (2/15/18): “Tragedies like this happen for a reason, and it probably doesn’t have a lot to do with guns.”

Regular people, too, gave their opinions on what causes shooting massacres: “We took prayer out of the school system,” says one Manuel Garcia of North Carolina. “And this is why all this is happening.” If we can’t put God back, at least we could put guns in: “I feel like they should put guns in the classrooms now with the teachers,” NPR quotes Fort Lauderdale “stay-at-home mom” Sabrina Belony. “I feel like teachers should be trained to be armed for something because teachers lost their lives trying to protect his class.”

The only response to this in the All Things Considered segment is a paraphrase of the perspective of students who survived the Parkland massacre: “They say the real problem is that weak gun laws allowed one deeply troubled teen to buy a semi-automatic rifle legally.”

This is what passes for objectivity in establishment media: a willful denial that there is any way to answer questions that people feel strongly about. In fact, the question of whether more guns result in less violence is one researchers have studied—not as much as they could have, granted, given the NRA-imposed limits on gun research—and other media outlets have reported the answers they’ve found. 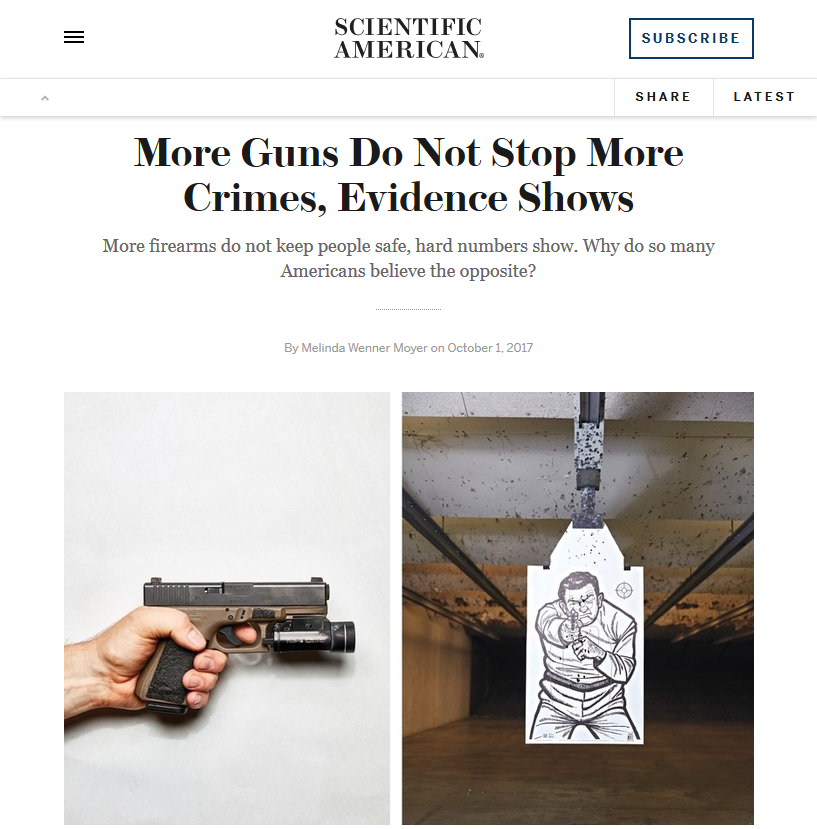 You don’t have to be Scientific American to look at the science behind gun claims.

In a piece headlined “Guns Do Not Stop More Crimes, Evidence Shows,” Scientific American (10/1/17) quoted physician and gun researcher Garen Wintemute’s summary of the state of the evidence: “There are a few studies that suggest that liberalizing access to concealed firearms has, on balance, beneficial effects. There are a far larger number of studies that suggest that it has, on balance, detrimental effects.” In “No, More Guns Won’t Prevent Mass Shootings,” NBC (11/6/17) cited Daniel Webster, director of the Johns Hopkins Center for Gun Policy and Research:

The more guns are readily available, the more shootings occur. That’s what the latest research shows. When states make it more easy for people to carry guns, the number of incidents of aggravated assault grows.

After the Newtown massacre, Salon‘s “The Answer Is Not More Guns” (12/17/12) quoted University of Washington epidemiologist Fred Rivara: “There is no data supporting [the] argument that the further arming of citizens will lessen the death toll in massacres like the one this week in Connecticut.” Mother Jones (12/15/12) pointed out, based on its database of mass shootings, that despite a 50 percent increase in the number of private guns since 1995 and numerous laws making it easier to carry a concealed weapon, there are virtually no cases of an armed civilian stopping a shooting spree.

NPR didn’t cite any evidence, or ask any experts to weigh in on conservatives’ claim that more guns are the solution to gun violence. It’s a strikingly irresponsible approach to covering a deadly epidemic.