Facts don’t matter in commentaries printed by Newsweek, so long as the writer “seems genuine.” That’s the takeaway from a troubling email exchange with Newsweek opinion editor Nicholas Wapshott in response to concerns and questions I raised about a recent commentary attacking the organic industry. 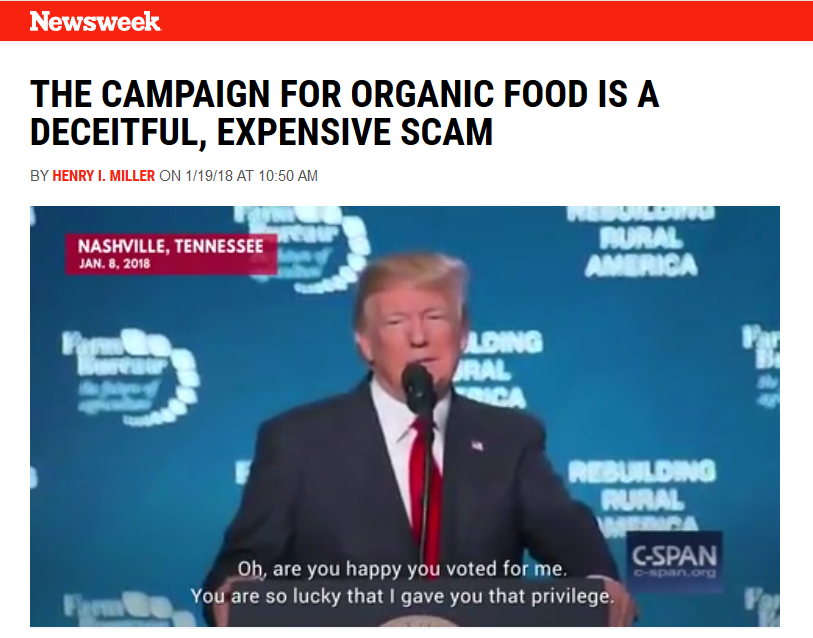 This Newsweek article (1/19/18) doesn’t mention that its author has been exposed as putting his name on Monsanto-written articles–but it does spend several paragraphs attacking the reporter who exposed him.

The organic hit piece in Newsweek (1/19/18) carried the byline of Henry I. Miller, who lost his platform at Forbes last year after the New York Times (8/1/17) revealed that Miller had published an article in Forbes under his own name that was actually written by Monsanto.

In his recent Newsweek article, Miller spent several paragraphs attacking Danny Hakim, the New York Times reporter who revealed that ghostwriting scandal; but Miller didn’t disclose to readers either the scandal or his collaborations with Monsanto.

Yet Monsanto’s fingerprints were all over Miller’s Newsweek article, as I reported (US Right to Know, 1/23/18). Miller used pesticide industry sources to make false claims about organic farming, and attacked people who were named on a target list that had been developed by Monsanto and Jay Byrne, Monsanto’s former director of corporate communications, who was quoted in Miller’s piece with no mention of the Monsanto affiliation.

None of this appears to bother Newsweek opinion editor Nicholas Wapshott, according to an on-the-record email exchange.

On January 22, I emailed Wapshott to raise concerns that Newsweek continues to publish Miller’s commentaries without disclosing his relationship with Monsanto, and asked if he was aware that:

1) The New York Times reported in August that Miller had been caught publishing an article ghostwritten by Monsanto under his own name in Forbes, in violation of Forbes’ policy. Forbes ended its relationship with Miller and deleted all his articles from the site.

2) A 2015 internal Monsanto PR plan (recently released by lawyers involved in litigation against Monsanto) lists “Engage Henry Miller” as one of its first action items.

3) A source Miller used in his Newsweek article, Jay Byrne, is a former Monsanto employee (not identified as such). According to emails I reported here, Byrne worked with Monsanto to set up a front group of “independent” academics, secretly funded by industry, who attacked the organic industry as a “marketing scam,” the same theme in Miller’s Newsweek article.

4) Miller has a long history of partnering with—and pitching his PR services to—corporations that need help convincing the public their products aren’t dangerous and don’t need to be regulated.

Wapshott responded, “Hi Stacy, I understand that you and Miller have a long history of dispute on this topic. He flatly denies your assertions. Nicholas” 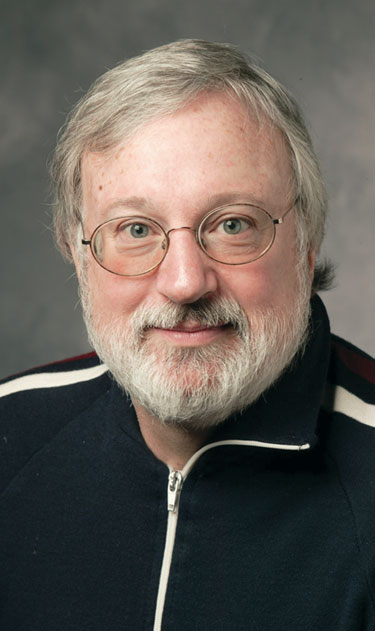 Henry I. Miller: “He seems genuine.”

I wrote back to ask for clarification.

Miller denies he published a column ghostwritten by Monsanto under his own name in Forbes and that Forbes has since deleted all his articles? (NYT story,Retraction Watch story)

Miller denies that Jay Byrne, the former Monsanto employee not identified as such in his Newsweek article, was involved with setting up Academics Review as a front group? (Byrne has not denied writing theseemails.)

Miller and I have disagreed yes, we were on opposite sides of a political campaign to label GMOs, but the above facts are facts, and provable. Do you think it’s fair to your readers to continue to publish his work without disclosing his ties to Monsanto?

Wapshott responded, “I think so. I have met Miller and he seems genuine. And I find it hard to believe that his flat denial is a lie. We would need a full trial to determine the truth and those resources are, thank goodness, beyond our means.”

I wrote back to Wapshott once more, pointing out that a trial is not necessary in the Miller case, since the facts have been established by reporting in the New York Times and corroborated by Forbes’ spokesperson Mia Carbonell, who told the Times:

All contributors to Forbes.com sign a contract requiring them to disclose any potential conflicts of interest and only publish content that is their own original writing. When it came to our attention that Mr. Miller violated these terms, we removed his blog from Forbes.com and ended our relationship with him.

Does Newsweek have a similar policy to require writers to disclose potential conflicts of interest and use only their own writing?

Newsweek editors have yet to respond to my query about disclosure policies. But the problem of weak, confused or non-existent conflict-of-interest disclosures is widespread in the media.

For a 2015 article in CJR (11/23/15), Paul Thacker asked 18 media organizations that cover science to describe their disclosure standards for both journalists and the sources they use in their stories, and 14 responded.

“The responses present a jumbled mix of policies,” Thacker wrote.

Some draw a bright line—preventing journalists from having financial ties to any outside sources. Others allow some expenses and speaking fees. To complicate matters further, some organizations have written rules, while others consider incidents on a case-by-case basis. Standards advocated by professional societies also seem to differ. 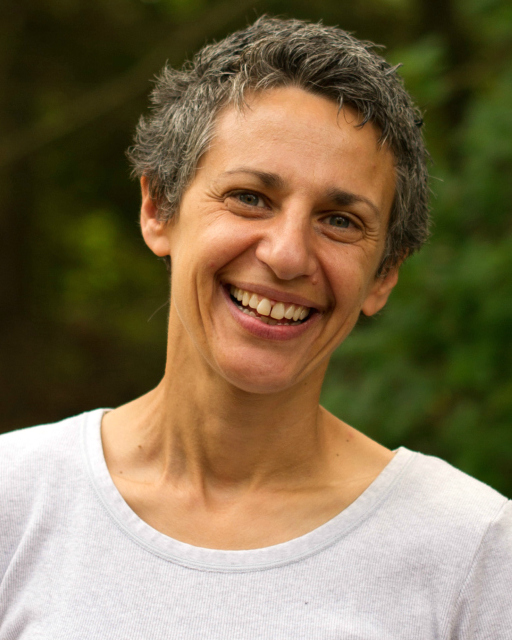 Some outlets apply different standards to reporters and columnists, as I learned when I asked why Washington Post food columnist Tamar Haspel can take speaking fees from agrichemical industry groups while writing about that industry as part of her regular column beat (FAIR.org, 10/28/15). Reporters at Washington Post aren’t allowed to do that, but in the case of columnists, the editor decides.

It’s all very murky. And some outlets are clearly crossing a bright line by publishing the views of groups and people who work with corporations to promote pro-industry science views without telling readers about the corporate collaboration.

Henry Miller’s attack on organic food in Newsweek is one example. Another is USA Today’s regular publication of science columns from the American Council on Science and Health, a front group for the tobacco, chemical, fossil fuel, pharmaceutical and other industries seeking to discredit scientific information about the harm of their products.

In February 2017, two dozen health, environmental, labor and public interest groups wrote to the editors of USA Today asking the paper to stop publishing science columns by the American Council on Science and Health (ACSH), or at least provide full disclosures about who funds the group.

Leaked financial documents reveal that ACSH solicits money from corporations to defend and promote their products; for example, ACSH spins science on fracking, e-cigarettes, toxic cosmetics and agrichemical industry products, and solicits funding from those industries in exchange. Recent reporting establishes that ACSH works with Monsanto on messaging campaigns.

“USA Today should not be helping this group promote its false identity as a credible, independent source on science,” the two dozen groups wrote to the editors. “Your readers deserve accurate information about what and whom this group represents, as they reflect on the content of the columns.” 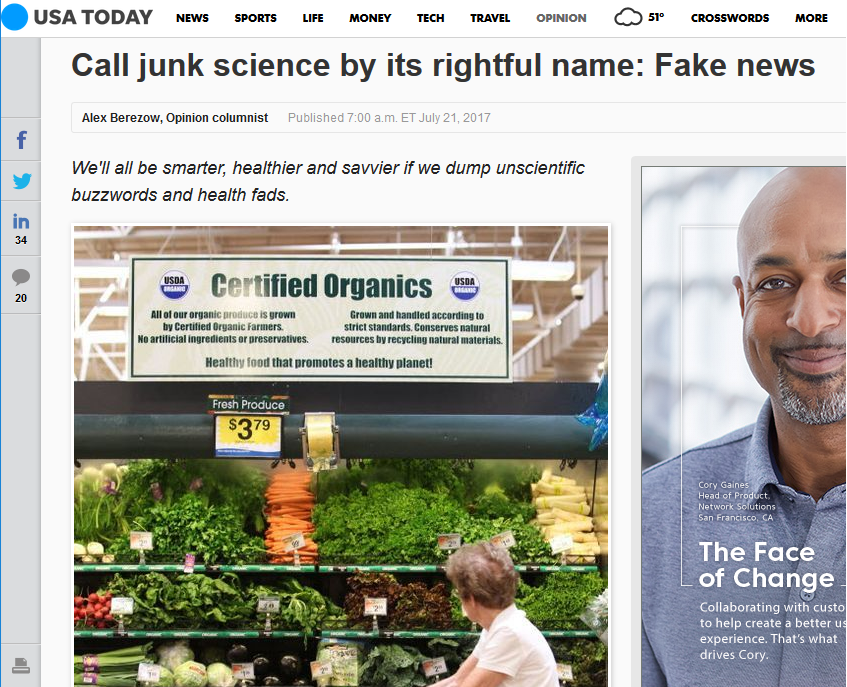 An ironic headline (USA Today, 7/21/18) for a piece written by a representative of a corporate front group.

Nearly a year later, USA Today is still publishing columns by ACSH staff and still failing to notify its readers about ACSH’s funding from corporations whose agenda they promote.

To the best of our knowledge, all of the columns in question were authored or co-authored by Alex Berezow, a longtime member of USA Today’s Board of Contributors. Mr. Berezow has written some 25 op-eds for us since 2011, and we consider him to be a credible voice on scientific issues. He holds a PhD in microbiology from the University of Washington, was the founding editor of RealClearScience and has contributed to a number of mainstream outlets.

Berezow is now a senior fellow at ACSH, and his “@USAToday contributor” status appears in his bio on Twitter, where he frequently attacks critics of the pesticide industry, for example in this recent vile tweet featuring a sexually graphic illustration of a nurse giving a patient a coffee enema.

Does USA Today really want to be associated with this type of science communication?

Integrity and Transparency in Science Reporting

News outlets can do better than these examples at Newsweek and USA Today, and they must do better. They can start by refusing to publish columns by corporate front groups and PR surrogates who pose as independent science thinkers.

They can implement clear and strong policies that require all columnists and journalists to disclose potential conflicts of interest for themselves and the sources they cite in their work.

At a time when the public is questioning the legitimacy of the news media, it is more important than ever for all publications to follow the highest standards of journalistic ethics and serve the public with as much truth and transparency as possible.

This article originally appeared on the website of US Right to Know (1/31/18), where Stacy Malkan is co-founder and co-director.

Remember that respectful communication is the most effective. Feel free to leave copies of your messages to Newsweek and USA Today in the comments below.