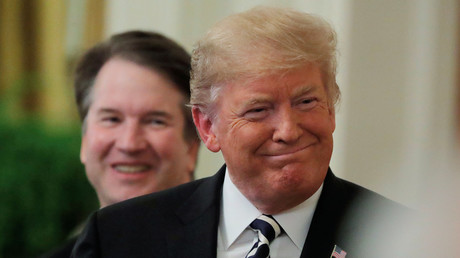 A head-scratching gaffe from Fox News’ graphics department has left people perplexed as to how the TV station could mess up the name of one of its favorite subjects; US President Donald Trump.

On Laura Ingraham’s show, the panel was discussing Time Magazine’s oft-controversial “Person of the Year” award when a graphic showing the 2018 finalists incorrectly labeled the US leader as “David Trump.”

Curiously, ‘David Dennison’ was the alias President Trump used in the documents and lawsuits against Stormy Daniels, though the error was unlikely to be a reference to that particular episode of Trump’s presidency.

That’s an obvious mistake … it should have been “David Dennison”

“It says David Trump on my sheet, but I assume they mean Donald Trump,” Ingraham said, verbally facepalming, most likely in the full knowledge that the ever-watchful eyes of the Twitterati had caught the moment, and were in all likelihood already prepping their derisory tweets.

Hilariously, it wasn’t the only blunder in the graphics package, which also referred to South Korea’s President as Jae In, his first name, and not Moon, his surname.

As if “David Trump” isn’t bad enough, they’ve called the President of South Korea “Jae-In” – his given name – and left his family name, Moon, out completely. These people cannot be taken seriously.

The fun didn’t stop there, however, as users pointed to even more recent hiccups courtesy of the graphics department at Fox News in recent broadcasts.

Even when they produce what they were asked to, it seems the department may have questionable tastes or artistic direction.