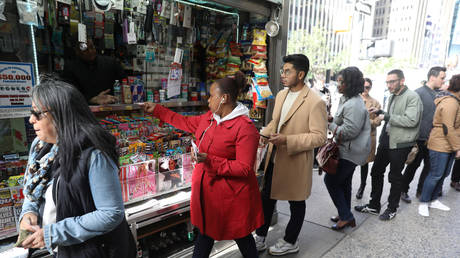 The Yemeni American Merchants Association has called on all the community – which runs quite a few newsstands in NYC – to boycott the New York Post after it scathed Congresswoman Ilhan Omar over her controversial 9/11 comment.

The Rupert Murdoch-owned daily has drawn the ire of the Yemeni Americans after it clearly accused Omar of downplaying the grave human cost of the 9/11 attacks.

“Here’s your something: 2,977 people dead by terrorism,” the paper’s Thursday front cover said, referring to Omar’s comment in which she described the terrorist attack as “some people did something.” A full-page photo of the World Trade Center towers burning on September 11, 2001 was used as a backdrop.

While the congresswoman’s speech delivered at the Council on American-Islamic Relations (CAIR) last month may not have been thoroughly well-thought, she was at the time decrying the fact that all US Muslims have had to live with a stigma because of the attack committed by a group of terrorists.

On the polarized American Twitter, however, it could only be taken in black and white. US President Donald Trump on Saturday posted a damning video featuring Omar’s quote interspersed with footage of the collapsing twin towers. Donald Trump Jr. called Omar a “disgrace,” adding that “never in my life would I imagine a member of congress showing this much disdain for America & Americans.”

On the opposite side of the spectrum, Alexandria Ocasio-Cortez and other fellow Democrats rushed to accuse Trump of “endangering” Omar’s life with this “attack.” Ocasio-Cortez went as far as quoting the proverbial “First they came” poem in her tweet to somehow back her point.


But while New York Post apparently took chances to capitalize on the hype, it might yet prove costly for the paper. Accusing it of “undermining national unity” as well as “spreading violence and hate in the community,” the Yemeni American Merchants Association announced a boycott on the sale and purchase of the daily.

Yemeni American Merchants have declared a boycott of the racist NY Post! Starting tomorrow morning Yemeni American merchants will be rejecting the sale of the NY Post! NY Post take your papers back! #BoycottNYPostpic.twitter.com/TE5uP7qFjU

“This rhetoric threatens the safety and wellbeing of Omar, Muslim leaders, and the larger Muslim American community at a time when Islamophobia is at an all-time high,” the association said in an open letter, as cited by the Guardian.

The group represents Yemeni Americans, who own and run between 4,000 and 5,000 of New York City’s delis and corner stores – a sizeable portion of the total number of shops commonly known as bodegas. The boycott has no “end date”, Ayyad Algabyali, the group’s director of advocacy, told the media.

The move immediately got traction on Twitter. But unlike the reaction to Trump’s tweet, this time the social media was much more unified in its condemnation of the paper. The Yemeni community rallied to the association’s call, and the outside supporters have even calling on the paper to be “put out of business” altogether.

Many condemned the Post’s cover as “disgusting” and expressed their support for the boycott.

Following the uproar, Omar took to Twitter to thank her supporters and assure them of her “unwavering love for America.” She also attacked the Trump administration by accusing it of not caring about the “working people,”“banning Muslims from this country” and putting immigrant children in cages. She did not address the source of the controversy, though.