A 76-million-year-old fossilized skeleton of a tyrannosaur, unearthed in Utah, is being described as the most complete fossil ever discovered in all of the south-west US.

The remarkable fossil was found on a remote field site in the Grand Staircase-Escalante National Monument (GSENM) and airlifted by helicopter to the Natural History Museum of Utah for closer study.

The fossil is approximately 76 million years old and is likely an individual of the species Teratophoneus curriei, “one of Utah’s ferocious tyrannosaurs that walked western North America between 66 and 90 million years ago during the Late Cretaceous Period,” according to The University of Utah. 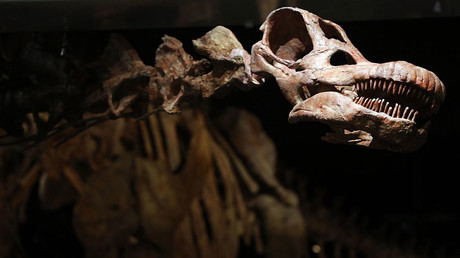 “With at least 75 percent of its bones preserved, this is the most complete skeleton of a tyrannosaur ever discovered in the southwestern US,” said Dr. Randall Irmis, curator of paleontology at the Museum and associate professor in the Department of Geology and Geophysics at the University of Utah.

“We are eager to get a closer look at this fossil to learn more about the southern tyrannosaur’s anatomy, biology, and evolution,” Irmis added.

The fossil, which includes a nearly complete skull, was first discovered by GSENM Paleontologist Dr. Alan Titus back in July 2015. It took 2,000 to 3,000 people hours to excavate the site and an estimated 10,000 hours of work remain to prepare the specimen for research.

“Without our volunteer team members, we wouldn’t be able to accomplish this work. We absolutely rely on them throughout the entire process,” said Irmis.

It is believed the dinosaur was 12-15 years old at the time of its death and about 17-20 feet long. The remains possibly lay buried in a river channel or on a floodplain, keeping the skeleton intact.

This new fossil will provide important context about the life of the ancient creature in the southern US. Many T-Rex fossils have been found in northern US and Canada over the years but little is known about their southern counterparts.