A Northern Irish native has been sentenced to three months in jail by Antrim Magistrate’s Court after abusing and attacking staff during a drunken rampage, before trying to get away on an airport tug vehicle.

Paul Anthony Burgoyne, 51, who resides in Shepshed, Leicestershire pleaded guilty to a total of nine offenses on Tuesday, which included common assault and recklessly endangering the safety of an aircraft. He was also fined £500 ($660) and ordered to pay £600 ($795) to the plane’s captain, according to Leicestershire Live.

The commotion started on a flight from George Best Belfast City Airport to Birmingham, where Burgoyne became enraged after flight crew for the budget airline requested that he open a neighboring window blind prior to take-off. 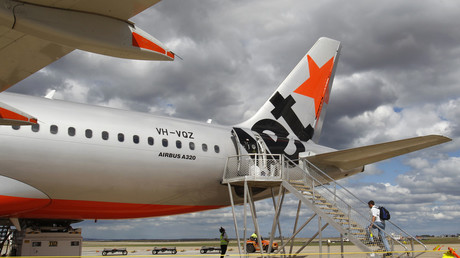 Perturbed by what he apparently considered to be a dictatorial request, Burgoyne reacted by raising his right arm with a straightened hand and shouting: “Alright, mein Fuhrer” – a reference to the greeting reserved for the ruler of Nazi-era Germany, Adolf Hitler.

The bizarre reaction resulted in the aircraft’s pilot deeming the man unfit for travel, and requested that he be ejected from the flight. The court was told that Burgoyne did not react kindly to this request either, swearing at the pilot and crew before attempting to grab the pilot by the throat. The ensuing struggle resulted in Burgoyne smashing the pilot’s £600 ($795) watch.

Once ejected from the aircraft, the chaos continued as Burgoyne turned his attention to a nearby tug vehicle. After kicking the tug, which was still attached to the plane, he attempted a drunken getaway by mounting the vehicle and grabbing its steering wheel.

He then managed to square up to another member of staff before finally being arrested.

Speaking in Burgoyne’s defense, Neil Moore said it was clear from the reports that “alcohol, other illicit substances, and fractious and toxic family relationships” led to the incident.

He described it as “an explosion of anger” and conceded that “obviously, his behavior on that plane is disgraceful.”

Moore argued that Burgoyne “is a decent member of society who holds down a decent job” having left Northern Ireland “to build a new life.”

On passing sentence, District Judge Nigel Broderick hoped the penalty would act as a warning to any others engaged in such behavior.

Despite being brought to jail after sentencing, Burgoyne was released on bail pending appeal.