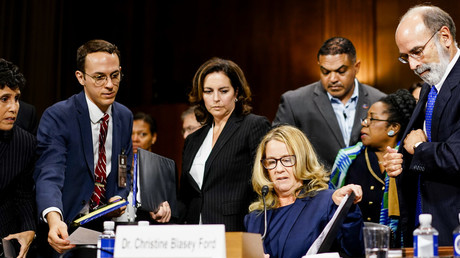 US Rep. Sheila Jackson Lee was caught on video slipping an envelope to Christine Blasey Ford’s attorney during hearings on accusations against the SCOTUS nominee Brett Kavanaugh, triggering a wave of speculation on its contents.

The envelope slip was very brief and quite secretive, yet it did not escape the cameras.

The mysterious transfer prompted speculations on what exactly was inside the envelope, with the leading – and obvious – theory it contained a wad of cash.

The manner in which the attorney handled the envelope, putting it straight into his pocket without even looking, prompted some questions as well.

Yeah, not sure what’s going on but handing an envelope over that goes straight into your inside pocket looks dodgy everyday of the week!

Some people, however, assumed the package contained something more personal than a bunch of Federal Reserve notes.