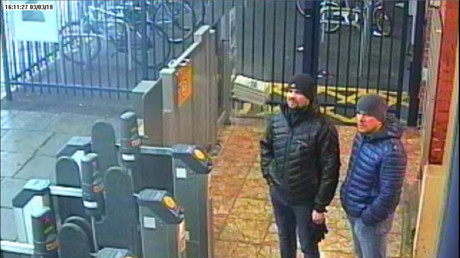 Enlisting the help of fellow NATO members and kicking Russia off the UN Security Council –  just two suggestions put forward by MPs reacting to the alleged involvement of two Moscow intelligence officers in the Skripal poisoning.

Prime Minister Theresa May’s made an emergency statement to the House of Commons on Wednesday, in which she alleged that Alexander Petrov and Ruslan Boshirov were the Russian GRU agents responsible for the Salisbury and Amesbury poisonings. Following her statement, dovish voices were few and far between as MPs took turns to lambast the Kremlin, proposing increasingly harsh against on Moscow.

The MP for Barrow-in-Furness, who recently resigned from the Labour party to stand as an Independent, has long been a cheerleader for the Turkish government of Recep Tayyip Erdogan and the Saudi regime.

Nothing like the threat of war to sort out UK-Russia relations.

The Conservative barrister questioned whether parliament should now look at the ease of travel into the UK which Russians currently enjoy – implying tougher measures need to be introduced.

He told the House of Commons: “It clearly is going to become a pertinent issue when it becomes so apparent that the system is being abused by the Russian state for the purpose of sending [hoods] and murderers to come into our country to kill our citizens and those who are protected by us.”

The Tory MP, who served three tours in Afghanistan as an army officer, asked how Russia could remain on the UN Security Council as one of its five permanent members.

“How Russia can credibly remain a P5 member is hard to see. UNSC becoming obselete [sic] with Russia committing war-like acts on another P5 member. New body/forum required? They will only respond to strength,” he tweeted.

How Russia can credibly remain a P5 member is hard to see. UNSC becoming obselete with Russia committing war-like acts on another P5 member. New body/forum required? They will only respond to strength. https://t.co/Ce5jjIZOC4

Another British soldier turned Twitter warrior, Tugendhat took to social media, utilising fiery rhetoric, obviously in an attempt to defuse tensions between Moscow and London. He told his Twitter followers that Putin is to blame for the “war-like act.”

We now know: Russian GRU agents came to the UK with the intention of using chemical weapons on our streets. There is no doubt it was state ordered and President Putin bears responsibility for a war-like act.