MPs from across the political divide have come together to voice their concerns that the UK government is not spending enough on defense, giving support to earlier arguments made by Defence Secretary Gavin Williamson

The MPs from the Commons Defence Committee had earlier backed an increase in defense spending in a report released last week. Titled ‘Beyond 2%,’ the paper argues for an increase in funding for the department from two percent of GDP (£40bn) to three percent (£60bn).

If awarded, that £20 billion increase would in turn fill an existing funding gap currently in the department’s budget, with Williamson under pressure to make tough decisions to keep the books balanced while carrying out a modernization of the military. 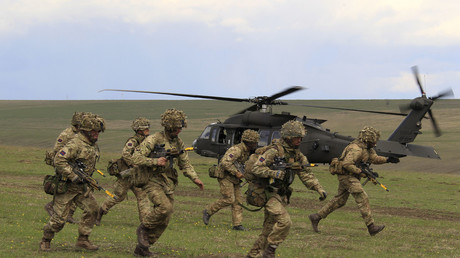 The committee argued that the extra money could be spent on increasing the readiness of the armed forces and bolstering Britain’s anti-submarine warfare to counter possible threats from Russia.

While a more moderate increase to 2.5 percent of GDP has also been suggested by the committee which would “comfortably fill the ‘black hole’ in the existing MoD budget,” not investing in the UK Armed Forces would see its usefulness to the US diminish.

“Influence is really important because unless you can back it up with capability, you have no credibility,” she said.

The MPs from the committee taking to the airwaves follows weeks of building tension between officials in the Ministry of Defence, led by Secretary of Defence Gavin Williamson, and the treasury backed by Prime Minister Theresa May.

READ MORE: As May picks the NHS over defence, is the UK government really worried about Russia?

The prime minister’s unwillingness to loosen the purse strings to help fund future modernization efforts has led to rumors of a palace coup led by Williamson.

Rumors reported at the weekend said Williamson had a group of between 50 and 70 MPs willing to vote against the government on policy if their demands for more funding were not met.

Speaking to BBC Radio 4’s Today, General Lord Nick Houghton, who served as army chief of staff between 2013 and 2016, said that an increase in defense spending was “not just what the armed forces needs, it’s what the country needs.”

“The government now finds itself in a very difficult situation. It does have a defence programme which is currently wholly unaffordable within the available funding.”

Houghton said the government’s dilemma now surfaced around the questions: “Do we increase the defence budget to make this ambition affordable, or do we actually diminish ourselves in terms of our status as a military power.”