Support for a second Brexit vote is growing, with a new poll indicating that nearly half of all Brits want a say on the final terms. The EU, however, seems to be growing used to the idea of the UK’s exit.

For the first time, the broader public appear to have backed a second referendum, with 44 percent of people calling for a vote on Prime Minister Theresa May’s final agreement with the EU. The research, conducted by anti-Brexit group Best for Britain, also said that 36 percent reject the idea of a second referendum – a good eight points behind.

The only reasonable scenario for a second referendum to be called would be if MPs reject May’s deal with the EU – but such a disagreement would spell crisis and constitutional turmoil for the UK. The group is using the research to call on MPs to respond to the people’s growing desire for a “final say.”

Best for Britain chief executive Eloise Todd said voters should have the chance to choose between a non-EU future or life within the bloc, once May has hammered out a deal.

“Now there is a decisive majority in favor of a final say for the people of our country on the terms of Brexit. This poll is a turning point moment,” she said.

“The only democratic way to finish this process is to make sure the people of this country – not MPs across Europe – have the final say, giving them an informed choice on the two options available to them: the deal the government brings back and our current terms. 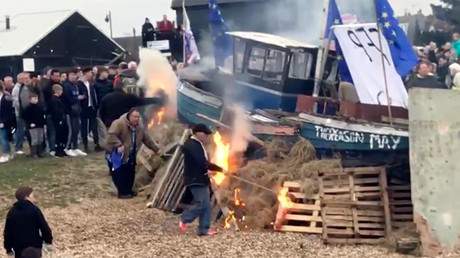 “We now need MPs across Parliament, from [Labour leader Jeremy] Corbyn’s front bench to the moderates of the Conservative Party, to do what’s best for Britain and back a people’s vote on the terms.”

Former Prime Ministers Sir John Major and Tony Blair have been vocal in calling for another referendum, but the Liberal Democrats and the Greens are the only parties in favor of another vote.

Best for Britain said its poll of 813 people indicated that just shy of a quarter of people who voted Leave in the last referendum want another say on the final terms of the Brexit agreement.

Meanwhile, the European Union seems to have accepted that Britain will not change its mind on Brexit following the March 2019 divorce deadline. Ireland’s EU commissioner in Brussels, Phil Hogan, said Monday that EU leaders do not expect any substantive change in the UK’s position before March 2019, even if there is a vote on the Brexit deal in Parliament before then.

“One thing we have already learned from Brexit is that the UK does not have a better idea,” Hogan said. “It does not have a replacement for the union as a way to improve the life quality of its citizens, its businesses and its standing in the world.

“Stepping into global Britain is stepping into a difficult world,” he added. “And there will be a huge gap between hope and experience. One hopes that [Theresa] May’s confidence is not misplaced.”

He also said that the UK’s post-EU landscape will mean that Britons will regain their sovereignty but will have “reduced bargaining power, reduced security of its markets and supply chains,” as well as friction and cost added to trade in Europe.