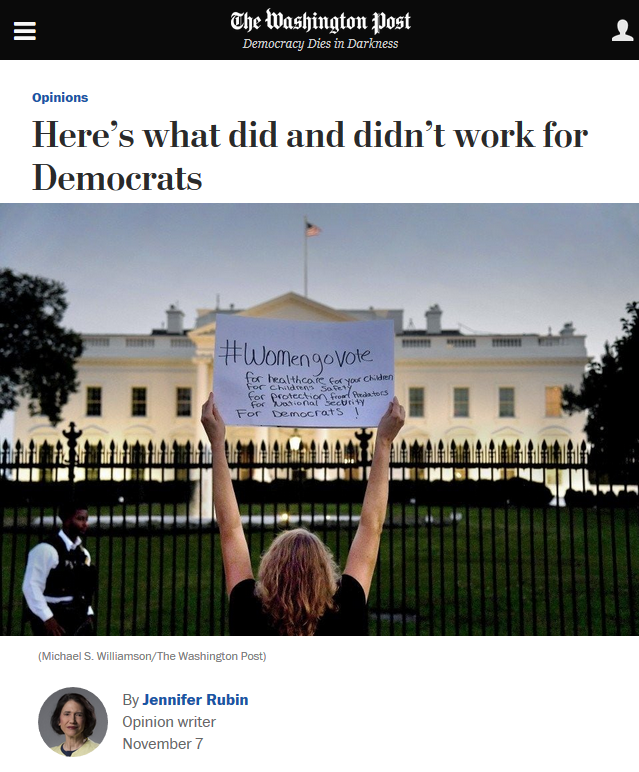 Washington Post columnist Jennifer Rubin (11/7/18) had some familiar-sounding advice for Democrats based on the results of the midterm elections:

In case you didn’t get the message, Rubin had another column (11/8/18) the next day: “Three Cheers for the Moderates.”

“Move to the right” is always corporate media’s advice for Democrats—win or lose. But did the 2018 midterms really demonstrate the virtues of moderation?

Well, the worst news for Democrats on Tuesday was the loss of three Senate seats held by incumbent Dems: North Dakota’s Heidi Heitkamp, Indiana’s Joe Donnelly and Missouri’s Claire McCaskill. As it happens, these are the Democrats who vote second-, third- and fifth-most often in line with Donald Trump’s preferences.

Heitkamp ran an ad bragging that she “voted over half the time with President Trump.” A Donnelly spot featured Trump saying, “Sen. Donnelly, thank you very much.”  A McCaskill ad declared that she was “not one of those crazy Democrats.”

They sound pretty “moderate,” right? Yet they not only lost, they lost big—by 11-, 7- and 6-point margins, respectively. 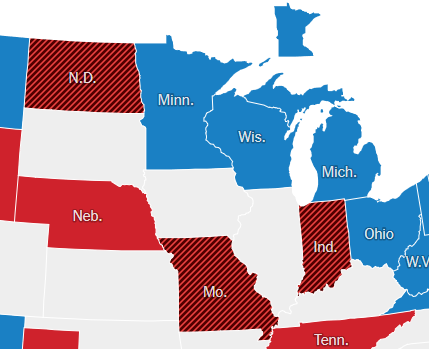 Rubin didn’t mention any of these three senators, presumably because they greatly undercut the point she wants to make. Instead, she called attention to the defeat of Ohio Democratic  gubernatorial candidate Richard Cordray, whom she described as “a progressive darling” and “a ‘tax and spend’ progressive” that “moderates in the suburbs might shy away” from. (When Rubin warned Democrats against the “Sanders type,” Cordray was the example she offered.)

In fact, Cordray campaigned in 1992 for Ohio’s 15th congressional district on a platform of fiscal conservatism. As Ohio attorney general, Cordray was a fierce proponent of the death penalty, complaining that “Ohio’s appeal process for inmates sentenced to death is still too long and sometimes defeats the possibility of justice being served” (AP, 4/1/09). In this governor’s race, the headline of his economic platform was “Support for Small Businesses to Grow and Spread Economic Opportunity”—not exactly a line stolen from Eugene V. Debs.

There was another Democrat on Ohio ballots this election—Sen. Sherrod Brown—who’s more aptly described as a “progressive darling.” Brown’s reputation as a progressive maverick may be overstated—during the current administration, he’s voted on Trump’s side 28 percent of the time, which is about half as often as Heitkamp, but three times as often as New York Sen. Kristen Gillibrand—but it’s unclear why Rubin saddled progressives with Cordray’s 4-point loss but didn’t give them credit for Brown’s 6-point victory.

Aside, that is, from the standard media assumption that moderation wins elections and any losses are to be blamed on being too far to the left.