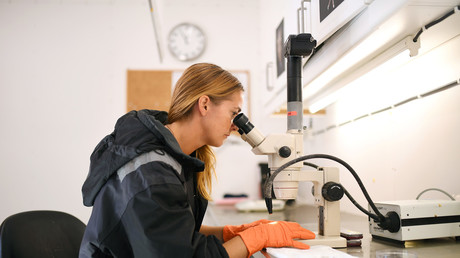 While it may not be worthy of ‘Honey, I shrunk the kids’ or Marvel’s Ant-Man, MIT researchers have developed a technique that will allow humanity to create nanoscale objects “of nearly any shape.”

These objects can be made from a wide range of materials ranging from metals, to quantum dots and even DNA, throwing open possible applications for a vast array of industries.

“It’s a way of putting nearly any kind of material into a 3D pattern with nanoscale precision,”says Edward Boyden, a professor in Neurotechnology and an associate professor of biological engineering and of brain and cognitive sciences at MIT.

The technique sounds deceptively simple. Researchers begin with a polymer scaffold sculpted into shape and patterned with a laser. This mould is then shrunk down to as little as one thousandth the volume of the original structure.

Current nanostructure techniques involve creating either 2-D structures or 3D structures by layering hundreds or even thousands of 2D patterns on top of each other, but this is slow and challenging at best.

While there are techniques that allow for more detailed, true 3D printing of objects, they are limited by material, typically polymers and plastics, and must be self-supporting; think solid pyramid but not hollow sphere.

Boyden and his team of boffins developed a novel technique to overcome these limitations by drawing on prior research into the high-resolution imaging of brain tissue, known as ‘expansion microscopy’. Even better, the technique uses many devices and materials that most science labs already have at their disposal.

“People have been trying to invent better equipment to make smaller nanomaterials for years, but we realized that if you just use existing systems and embed your materials in this gel, you can shrink them down to the nanoscale, without distorting the patterns,” co-author Rodriques says of their research.


At present, the researchers have managed to create structures of around 1 cubic millimeter, patterned with a resolution of 50 nanometers, however, this resolution is expected to greatly increase over time as the technology is improved.

The team sees immediate applications in the field of optics, where they could potentially craft lenses that could be used to study the fundamental properties of light. The technique could also vastly improve camera lenses on technology ranging from consumer smartphones to the medical industry’s microscopes and endoscopes.