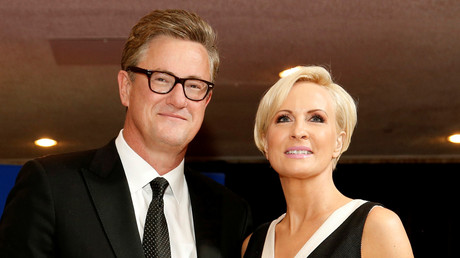 MSNBC’s talk show Morning Joe had half of its host family missing on Thursday. Mika Brzezinski was notably absent amid a scandal over a homophobic slur thrown at Secretary of State Mike Pompeo.

Brzezinski’s offensive remark slipped in during a live interview with Senator Richard Durbin on Wednesday. She wanted to ask his opinion about the killing of journalist Jamal Khashoggi and remarks made by Pompeo on the subject earlier on Fox & Friends.

“I understand that Donald Trump doesn’t care. He doesn’t care. But why doesn’t Mike Pompeo care right now? Are the pathetic deflections that we just heard when he appeared on Fox and Friends, is that a patriot speaking? Or a wannabe dictator’s butt boy?” she asked.

MSNBC host Mika Brzezinski missing from “Morning Joe” one day after apologizing for making a homophobic comment about Secretary of State Mike Pompeo. Joe Scarbaraugh announced she was on “a long-planned family event.” pic.twitter.com/j3weGp2xNs

On Thursday, Brzezinski’s co-host and husband, Joe Scarborough, explained her absence by saying that “Mika has the day off with her family, a long-planned family event.” He assured she would be coming back on Friday.

The network however did not immediately comment on the scandal, in contrast to its swift expression of support for host Joy Reid at the time she was criticized for homophobic posts written a decade ago.

Mika’s slur was met with instant outrage on social media, with people of all kinds of political affiliation expressing disgust with the phrase.

I was with you, @morningmika, right up to the “butt boy” comment. Try “toadie” or “lackey” or “stool pigeon” or “ass kisser,” or “traitor,” but maybe don’t equate homosexuality with Mike Pompeo carrying water for the murderous regime in Saudi Arabia.

This is disgusting! How can @KevinHart4real essentially be forced to lose his Oscar’s gig for comments he made years ago as a comedian, but Mika can make a seriously homophobic slur on a major news station, have the network try to cover it up & its not an issue? Give me a break! https://t.co/dTaBMkJa7x

MSNBC doesn’t care. Bigotry in the service of their political agenda is acceptable, even regarded as noble. This has been demonstrated again and again. That’s why @morningmika knows she doesn’t need to apologize. She’s on the Good Side, therefore even her homophobia is justified: https://t.co/bMKHmV8ryB

Facing the heat, Brzezinski tried to apologize on her Twitter account, saying that implying a pederasty relationship was a “SUPER BAD choice of words” and that she should have called the secretary of state a “water boy” instead.

Brzezinski’s remark is hardly the first instance when critics of Donald Trump have used homophobic biases to target him or his policies. In June, the New York Times published a cartoon showing an imaginary date between the US president and his Russian counterpart Vladimir Putin, which viewers were supposed to find disgusting.