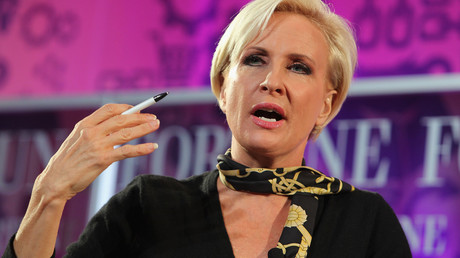 Following her mysterious absence from Morning Joe on Thursday, the co-host was back Friday morning with an apology for calling Pompeo “a wannabe dictator’s butt boy” in an on air rant. Brzezinski admitted the term she used was “vulgar” and said she immediately regretted using it. “I knew it right away and I tweeted that it was a terrible choice of words,” she said.

“Please allow me to say this face-to-face,” she continued. “The term is crass and offensive and I apologize to everyone, especially the LGBTQ community and to my colleagues for using it.”

Brzezinski used the interesting choice of words to ask why Pompeo didn’t seem to care about Riyadh’s alleged culpability in Khashoggi’s murder, during a live interview with Senator Richard Durbin on Wednesday.

“Are the pathetic deflections that we just heard when he appeared on Fox and Friends, is that a patriot speaking? Or a wannabe dictator’s butt boy?” she said, prompting outrage from viewers who were quick to call her out online.

On Thursday, her co-host Joe Scarborough claimed she had “the day off with her family, a long-planned family event” — an excuse that didn’t seem to fly, given that Scarborough is married to Brzezinski and would likely be joining her at any “long-planned” family events.

The incident even prompted US President Donald Trump to weigh in on Twitter, saying that if “crazed” Brzezinski was a conservative, she would have been “banned permanently from television.”

If it was a Conservative that said what “crazed” Mika Brzezinski stated on her show yesterday, using a certain horrible term, that person would be banned permanently from television….

It isn’t the first time Trump has taken to Twitter to criticize Brzezinski. In a series of tweets in 2017, he called her “low IQ crazy Mika” and suggested she had undergone a face lift.

Brzezinski’s indiscretion is also not the first homophobia-related scandal MSNBC has dealt with in recent months. In June, host Joy Reid had to apologize after old blog posts resurfaced in which she had made derogatory comments about Muslims and LGBT people.