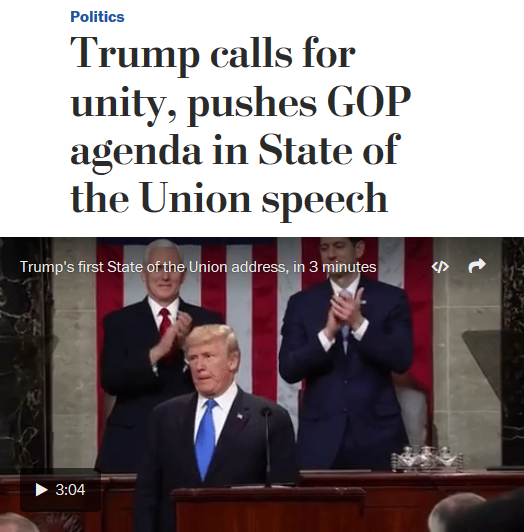 The Washington Post (1/30/18) focused on “the conciliatory tone of Trump’s first State of the Union address.”

President Donald Trump’s first State of the Union address did not disappoint those who expected it to contain the same bombast, exaggeration and outright lies that have characterized his rhetoric since he announced he was running for president in June 2015. While media factchecking projects should be taken with a hefty grain of salt, leading papers have amassed lengthy compendiums of Trump’s lies: The New York Times documented a “public lie or falsehood” on every one of Trump’s first 40 days in office, while the Washington Post counted 2,140 “false or misleading claims” in his entire first year.

But corporate media continue to grant Trump the same automatic legitimacy granted to past presidents whenever he reads the words of a professional speechwriter off a teleprompter, rather than tweeting or yelling whatever thoughts pop into his head. The response from top newspapers to his State of the Union address illustrate how the lies and false narratives perpetuated by Trump and his administration continue to be normalized.

In their lead story for the Washington Post (1/30/18), “Trump Calls for Unity, Pushes GOP Agenda in State of the Union Speech,” Karen Tumulty and Philip Rucker described “the conciliatory tone of Trump’s first State of the Union address,” contrasting it with “the combative manner in which he has conducted his presidency”—though allowing that the speech also included “polarizing language when lamenting crime from MS-13 and other gangs, which he blamed on ‘open borders.’”

This focus on tone and manners obscured the fact that Trump’s immigration claims were simply untrue. The United States does not have “open borders,” and hasn’t since the late 19th century. Despite Trump scapegoating immigrants for “the loss of many innocent lives,” the reality is that immigrants commit crimes in fewer numbers on average than native-born Americans. When Trump described the visa lottery as “a program that randomly hands out green cards without regard for skill, merit, for the safety of American people,” that’s just not true—lottery applicants must meet education and work requirements, and pass security and criminal background checks. Nor is it the case that “a single immigrant can bring virtually unlimited numbers of distant relatives” into the country.

But the fact that Trump’s push for a sweeping immigration crackdown was based on lies got lost in the focus on rhetoric—sometimes framed as a partisan issue, as when Tumulty and Rucker wrote, “Other Democrats said Trump was particularly divisive in his discussion of immigrants and in tying them to crime.” 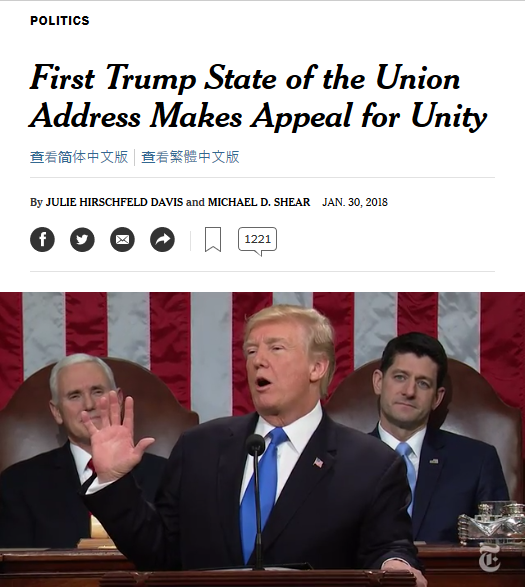 Covering Trump’s call for a clampdown on immigration, the New York Times (1/30/18) focused on how his “tone became markedly sharper,” rather than on his deceptive substance.

The lead story on the State of the Union address in the New York Times (1/30/18), “First Trump State of the Union Address Makes Appeal for Unity” by Julie Hirschfeld Davis and Michael D. Shear, likewise treated Trump’s deceptive immigration claims as a matter of style: “Mr. Trump’s tone became markedly sharper as he turned to the issue of immigration, seeking to link crime and terrorism to the United States’ immigration policies.”

Cathleen Decker of the LA Times (1/30/18) did a better job of directly debunking Trump’s talking points:

He claimed—as he has before—that the programs he wants to block allowed unvetted entries. They do not. He claimed that “a single immigrant can bring virtually unlimited numbers of distant relatives” into the country. They cannot.

Trump also touted the economy and the Republican tax bill in his speech, asserting that “after years of wage stagnation, we are finally seeing rising wages.” Actually, wages have been growing since since 2012, and wage growth actually declined in the first year of Trump’s administration, from 0.8 percent in 2016 to 0.4 percent. The New York Times allowed Trump to claim “job growth” as one of his accomplishments, even though slightly fewer jobs were created in 2017 than in 2016. (Presidents’ impact on the economy during their first year in office is, of course, debatable.)

Rather than correcting Trump’s boasts about economic performance, the Post instead focused on Trump’s false statement that his tax cut was the biggest ever—a meaningless comparison seemingly meant to take a shot at Trump’s bloated ego rather than illuminate the tax bill’s massive upward redistribution of income.

The Boston Globe’s lead story (1/30/18), by Astead W. Herndon, did manage to correct Trump’s lie that the tax bill has brought “tremendous relief for the middle class and small businesses,” but the Globe followed the same line that Trump’s rhetoric was “more orthodox than usual.” If boldface lies are “orthodox,” then the media have set a truly low bar.