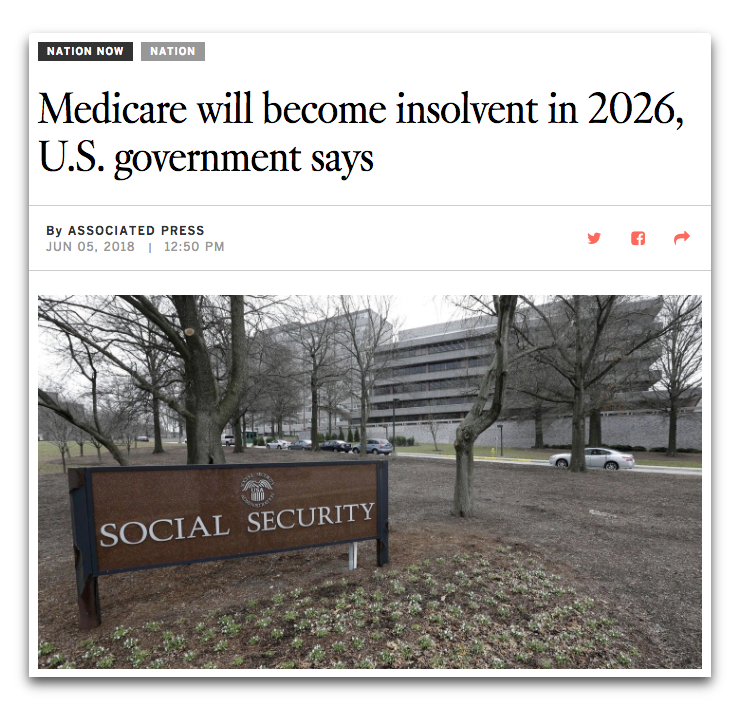 On Tuesday, dozens of media outlets broke what at first seemed to be a major story about “the government” announcing that Social Security and Medicare will be broke in less than 20 years:

If the lifelines of millions of poor, elderly and disabled were going to crumble in less than a generation, this would be major news indeed. But they’re not really. Or, at least, we have no objective reason to believe they will, since the authors of the report was not “the government,” as it’s generally understood—the Congressional Budget Office, or some other ostensibly bipartisan “commission” sanctioned by “both parties”—but the not-so-reliable Trump White House. The same White House that has a long, documented track record of venality, lying and corruption, and leads a Republican Party that has been quite explicit in its desire to “reform” Social Security and Medicare through slashing and privatizing.

The report was commissioned by the US Social Security Trustees, a benign-sounding but overtly partisan group of people all appointed by Donald J. Trump. Of the seven slots, two are vacant and the other five—Steven T. Mnuchin, secretary of the Treasury; R. Alexander Acosta, secretary of Labor;  Alex M. Azar II, secretary of Health and Human Services; Nancy A. Berryhill, acting commissioner of Social Security; and Mark J. Warshawsky, deputy commissioner for retirement and disability policy—were all put on the commission by the White House.

Three of the “trustees,” Mnuchin, Acosta and Azar, are Trump cabinet members. Berryhill worked for the Society Security commission prior to Trump’s term, but was elevated by him in 2017, and Warshawsky has previously served as assistant secretary for economic policy at the Treasury Department under George W. Bush from 2004 to 2006, and since then has frequently been published in right-wing outlets like the American Enterprise Institute and the Wall Street Journal. Put another way: The report is a partisan document produced by partisan actors. 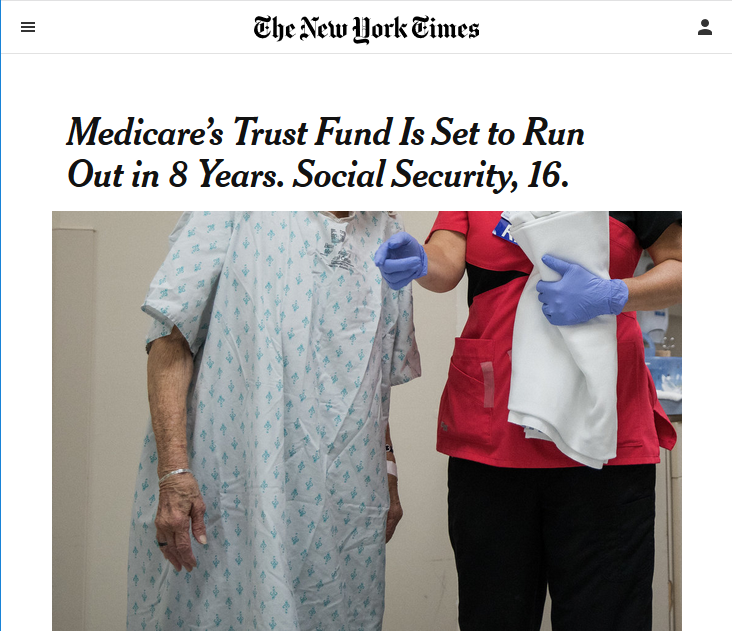 The New York Times (6/5/18) was one of a few major outlets to note this fact. Though its headline was as bad as the others, simply asserting as fact that “Medicare’s Trust Fund Is Set to Run Out in 8 Years. Social Security, 16,” the article by Robert Pear at least noted the actual source of the claim, starting out by noting the ideological source of the the “report” (emphasis added):

The article went on to refer to “the trustees of Social Security and Medicare, a group that includes three Trump cabinet officers.” (The story did also note that the report is “prepared mostly by nonpolitical actuaries and economists.”)

Almost every other major outlet didn’t bother to explain who the “trustees” were. And it wasn’t just the headlines that were the problem (“trustees,” “government” sound so unbiased and Very Official, don’t they?), it was also the text of the articles. None of the above pieces mentioned the agenda of those responsible for the report in the body of the article, much less framed their coverage in terms of that well-ground ax.

The average reader would come away thinking some dispassionate government body was issuing a warning about Social Security and Medicare based on verifiable and objective fact, as they would issue a warning about the Zika virus or an oncoming hurricane. People who generally trust “the government” may be far less likely to trust “the Trump administration.”

NBC Nightly News (6/5/18) also got into the uncritical fear-mongering game. Citing “the government” in a quick segment, anchor Lester Holt lamented, “The report said [the Social Security] trust fund will run out of [money] by 2034 unless Congress acts to fix Social Security’s finances.” Got to act now—call in the next ten minutes! 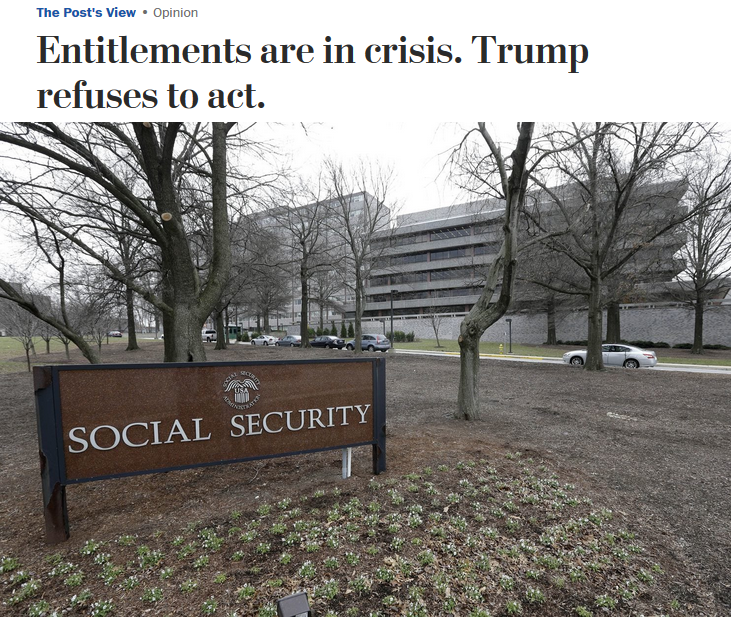 The Washington Post editorial board (6/6/18) was equally Very Concerned, but had a unique twist, turning a Trump administration report into a bludgeon to attack Trump from the right. Citing “the trustees who oversee Social Security and Medicare”—and without, of course, mentioning they’re all Trump appointees—the Post criticized Trump for “refusing to act” on “modest reforms.” An obligatory do-goody line about how much harm the Republican tax cuts did was thrown in, but the message the administration wanted to send, that Social Security and Medicare need to be cut, was firmly reinforced.

CNN (6/5/18) was one of the most egregious offenders, skirting the “officials say” or “report” frame altogether, and simply asserted in its headline that Social Security was, as a point of fact, doomed:

“Must reduce benefits,” according to whom? CNN doesn’t say, really, only citing these mysterious “Social Security and Medicare trustees.” Everything is presented as a bunch of bureaucrats calling balls and strikes.

And why does “reform” always seem to mean a variety of schemes to cut benefits? Progressive economists have long maintained that to the degree that Social Security needs to be “rescued,” it could be easily managed through modest tax hikes—most painlessly by removing the cap above which Social Security tax is not longer paid on income, which currently stands at $128,400—but that’s if one is actually interested in the survival of these overwhelmingly popular, life-sustaining programs.

Such myopia is a common occurrence when it comes to cutting programs for the poor. Despite having zero questions about poverty or climate change in the 2016 presidential debates, the billionaire-funded Committee for a Responsible Federal Budget was held up an objective, sober think tank in not one but two debate questions, by CBS’s Elaine Quijano and Fox News’ Chris Wallace—despite its decades-long ideological project of privatizing Social Security (FAIR.org, 10/21/16). 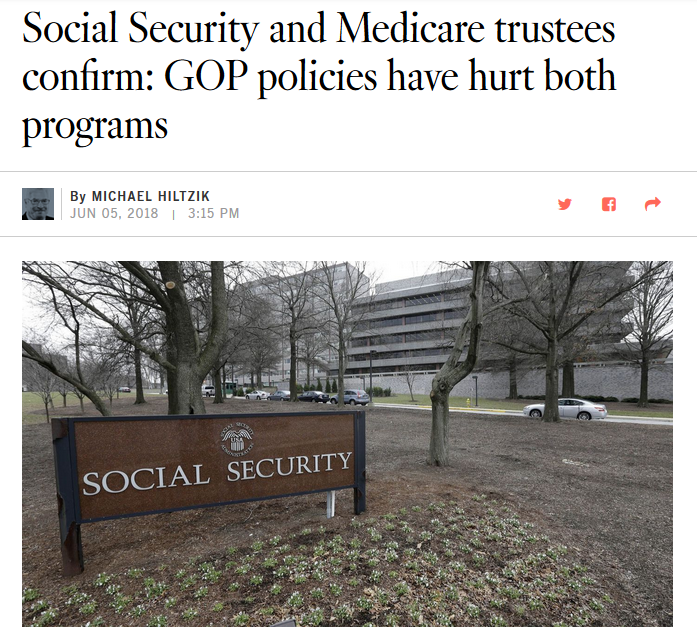 The partisan response of many liberals to the Trump administration report, such that it was (LA Times, 6/6/18), was to blame the insolvency of Social Security on the recent Republican tax cuts. While it’s important to note how much that bill added to the deficit and debt, to accept this frame is to swallow the premise of the report that “reforms” are needed—a far more likely eventuality than rolling back the Republican tax cuts.

Though the “insolvency” of entitlement programs is not a universally agreed-upon fact, the eminent fall of the fiscal sky is not put up for debate. Corporate media ought to subject this claim to skeptical scrutiny,  not mindlessly repeat it because some Trump flunkies said so.