The House of Representatives voted on Tuesday to roll back key provisions of the landmark Dodd/Frank Wall Street Reform and Consumer Protection Act, a 2010 law that increased regulatory scrutiny of banks following the 2008 financial crisis.

One of the many provisions of the original Dodd/Frank law subjected banks with over $50 billion in assets to annual economic “stress tests” to gauge their potential for collapse in the event of an economic crisis. The rollback bill raises that threshold to $250 billion, which would exempt at least two dozen “small” banks, including SunTrust, BB&T, Charles Schwab and American Express. By comparison, in 2008, key failed bank Countryside had only $172 billion in assets, and so would have avoided stress testing, while other financial dominos like Washington Mutual ($264 billion) and Bear Stearns ($289 billion) were close to the lower limit.

The Dodd/Frank rollback also relaxes banks’ reporting requirements on borrowers, and adds exemptions for banks with less than $10 billion in assets from the Volcker Rule, a Dodd/Frank provision that bars banks from investing deposits in risky private equity and hedge funds. 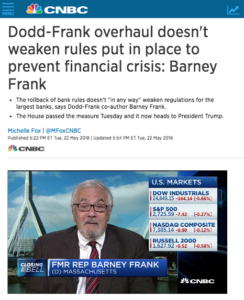 While some criticized the Democrats who took the side of the banks, they could point in their defense to a seemingly authoritative source: former Democratic Rep. Barney Frank of Massachusetts, one-half of Dodd/Frank’s namesake and its chief sponsor in the House. Frank weighed in on the rollback in an interview with CNBC (5/22/18), saying that “It does not in any way weaken the regulations we put in there for the largest banks or that were there to prevent the kind of crisis we had ten years ago,” and noting that the rollback “is not a big number on the bill. It’s a small number.”

What CNBC does not cite is Frank’s role as a member of the board of Signature Bank, a New York-based institution that held $43 billion in assets at the end of 2017. Signature Bank has been growing rapidly in recent years, increasing its assets by 10 percent since December 2016. Signature benefits directly from the Dodd/Frank rollback, as the bank was approaching the $50 billion stress test threshold. While Frank also maintains he would have voted “No” on the rollback if he were still in Congress, he suggested a $125 billion threshold instead, which would still give Signature room to more than double in size.

Signature Bank gave over $50,000 in campaign donations during the current election cycle to Democratic senators Joe Donnelly and Heidi Heitkamp, two key votes for the Dodd/Frank rollback bill. Also notable is that Ivanka Trump was a board member at Signature Bank from 2012-13, and the bank has also extended loans to both Donald Trump and her husband Jared Kushner. During her 18 months on the board, Ivanka Trump earned $40,000 in cash and $160,000 worth of shares. Since joining the board in 2015, Frank has netted over $1 million dollars (Washington Post, 5/24/18).

Washington Post reporter Jeff Stein (Twitter, 5/22/18) noted that Frank’s role as a Signature board member was conspicuously absent when reporters quoted him assuring that “the rules to prevent [banks] from getting into trouble will still be there” (New York Times (11/27/17), that “the upsides as well as the downsides of the proposed rewrites have been exaggerated” (Politico, 3/17/18) and that “people who say it’s a rollback are wrong” (CNBC, 3/16/18). Other outlets that left out Frank’s role as a bank board member while quoting him downplaying the magnitude of the rollback were the Washington Post (5/22/18), CBS News (5/23/18), NPR (5/22/18), Quartz (5/23/18) and the San Francisco Chronicle (5/22/18).

While some publications, like Vox (5/23/18) and AP (5/2/18), noted Frank’s involvement on the Signature Bank board, the lack of disclosure of his conflict of interest by some of the country’s largest publications is striking. It isn’t like Frank’s board membership is a secret, either; it’s literally in the first sentence of his Wikipedia page.