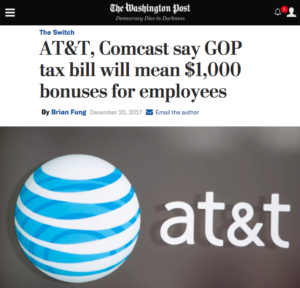 A New York Times/Survey Monkey poll last week revealed that, for the first time, a slim majority of Americans support last December’s Republican tax cuts—cuts that disproportionately benefit the rich, redistributing money from the poor to the wealthiest Americans.

How was the impressive feat of reality-inversion achieved? How did a tax cut that, once it’s all said and done, mainly benefits a small group of top earners become broadly popular? One reason is the nonstop deluge of stories over the past two months, cheerleading alleged “tax cut bonuses” from large corporations.

Democratic-leaning cable network MSNBC and its colleagues NBC, it should be noted, have mostly been the exception, avoiding the talking point for the most part.  But Fox News, CNBC, Fox Business, CNN and dozens of local media outlets joined the messaging charge, singing the bill’s money-saving praises. Here is just a small sample:

The degree to which congressional Republicans and business leaders coordinated on this messaging—either directly or through trade organizations like the Chamber of Commerce—is unknown. But every element of the rollout reeks of public relations: exact same figure, exact same messaging, staggered announcements to keep the drumbeat going and the “$1000 Bonus!” headlines in the news. ($1,000 is such a nice, round, pseudo-large number, isn’t it?)

As FAIR noted in regards to high-profile ISIS “plots” that are actually FBI-contrived Potemkin productions (Extra!, 5/15), only 40 percent of readers actually read past the headline. The substance of these high-profile “bonuses,” sometimes spelled out in the articles, is irrelevant to their net propaganda effect. This is compounded by the problem of local and cable news—media genres that are effectively just headlines being yelled at people—which ran nonstop stories on these alleged $1,000 bonuses:

The fine print that in many cases the bonus only “went up” to $1,000 for those that had worked at the firm in question for 20 years, as in the case of Walmart and Home Depot, or that Disney  used its ostensible $1,000 bonus as leverage during union negotiations, is rarely mentioned, especially above the fold.

As Bess Levin noted at Vanity Fair (12/21/17), to the extent the bonuses are real, they are a small PR cost for a broader ideological, long-term win—as are the minor wage increases and charitable donations that other corporations announced. “Goldman Sachs has estimated that the GOP tax bill will increase Wells Fargo’s profits by $3.7 billion next year, so $400 million to charity is ‘basically tithing,’” Levin wrote, quoting the tweet of the New York Times‘ Binyamin Appelbaum:

Wells Fargo currently pays a minimum of $13.50 an hour. They had about 25,000 workers at that level last year. So raising the minimum to $15/hour costs them about $80 million a year, assuming those workers are full time.

Put differently: Wells Fargo just announced that it will use 2 percent of its tax-cut windfall to pay higher wages.

While there has been some pushback on the impact of these bonuses—in outlets ranging from the  New York Times (2/2/18, 2/10/18), Huffington Post (1/20/18, 2/1/18), Vanity Fair (12/21/17) and Think Progress (12/20/17) to The Verge (2/20/17)—the overall torrent of headlines has had their intended net effect. In a media culture that’s atomized and paranoid about anything that approaches “conspiracy theory,” calling these bonus announcements what they are—a cynical (likely coordinated) public relations effort by Republicans and large corporations—is frowned upon. Instead, we’re supposed to see dozens of congressional Republicans, right-wing media and large corporate PR teams singing the same tune, and assume it’s a totally organic series of occurrences, each deserving its own press release, without connecting any of the dots.