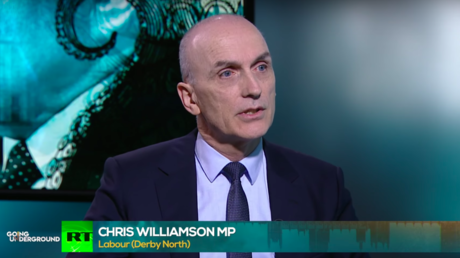 The revelations about UK government-funded propaganda outfit the Integrity Initiative are a “real scandal” and more questions need to be asked about its activities and motives, Labour MP Chris Williamson has told RT.

British media has been reluctant to cover the Anonymous leaks which exposed the Scotland-based organization in November 2018, revealing that it had used its hefty government funding to interfere in the domestic politics of other European countries and to engage in a smear campaign against Labour Party leader Jeremy Corbyn at home.

Speaking to RT’s Afshin Rattansi on Going Underground, Williamson said that the media might be hesitant to cover the leaks because they themselves are implicated.

One has to ask the question, therefore, is it because of their involvement that [journalists] are not covering this real scandal?

The leaks named a number of high-profile journalists, academics, politicians and military personnel, claiming they were part of special ‘clusters’ of influencers based in various countries around Europe. The documents showed that these so-called clusters are particularly interested in ensuring certain ‘narratives’ about Russia remain prominent in the mainstream media.

Williamson said the Integrity Initiative revelations were reminiscent of Operation Mockingbird in the United States in the 1950s, during which the CIA paid journalists at the New York Times, the Washington Post and other major trusted outlets to “put out propaganda and misleading stories” about the US government and its adversaries. The idea that something similar could be happening in British media is very troubling, Williamson said.

We value a free press in this country and I think it’s really important, therefore, that we are confident that people aren’t in the pay of some shady organization.

Lacking interest from mainstream media, Williamson himself made an effort to investigate the Integrity Initiative, traveling to its registered address in Scotland, which he found at the end of a “remote dirt track” in a “semi-abandoned mill” where nobody had heard of the organization. He then went back to London and visited the address of the Institute for Statecraft (IfS), the parent organization of the Integrity Initiative, where he was “met with a very hostile reception; I mean, shouted at and the door slammed in my face.”

It is odd, Williamson said, that an organization which received nearly £2.5 million in funding from the British government over the last 18 months would treat a member of parliament in such a dismissive way. “It suggests that they have something to hide, doesn’t it?” he said, adding that “more questions need to be put” about the organization.

Why is the Foreign Commonwealth Office, why is the Ministry of Defence as well, actually funding this organization? What are they getting out of it?

Referring to the Initiative’s efforts to smear Jeremy Corbyn as an agent of the Kremlin on social media, Williamson said that the idea of a state-funded, taxpayer-funded body engaged in smearing the official opposition and trying to clandestinely influence public opinion with government money was “completely unacceptable” and “totally alien” to the idea of British democracy.

Also on rt.com
Do it CIA style: What you need to know about latest leak on UK-funded psyop


Asked about the case surrounding the poisoning of ex-Russian spy Sergei Skripal and his daughter Yulia in Salisbury last March, Williamson said that while what happened was totally unacceptable, it was “perfectly legitimate” to ask questions about the case and to be “clear and certain” on the details before taking action.

One of the Integrity Initiative’s projects was a “monitoring” campaign of media and social media across Europe in the aftermath of the poisoning which aimed to “influence” journalists to stick to a pro-UK narrative.

Williamson said the organization had been trying to foster a “bellicose approach” to foreign policy and to countries like Russia and China which was “very dangerous.”

“If we ended up in a hot war with any of these countries, it’s ordinary people that pay the price,” he said.

Williamson is not the first high profile figure to call out the Integrity Initiative. This week, German MP Hansjoerg Mueller, a member of the Alternative for Germany (AfD) party, told Sputnik that the organization’s activities, while wrong, would not have much effect on the media landscape overall because the “whole Western mass media is already an anti-Russian propaganda institution.”

Brussels-based defense expert Pierre Henrot has described the Integrity Initiative’s efforts as being part of a consistent Western policy of portraying Russia “as the arch-enemy” in order to justify bloated military budgets and accused the organization of publishing “pseudo-information” designed to mislead the public.