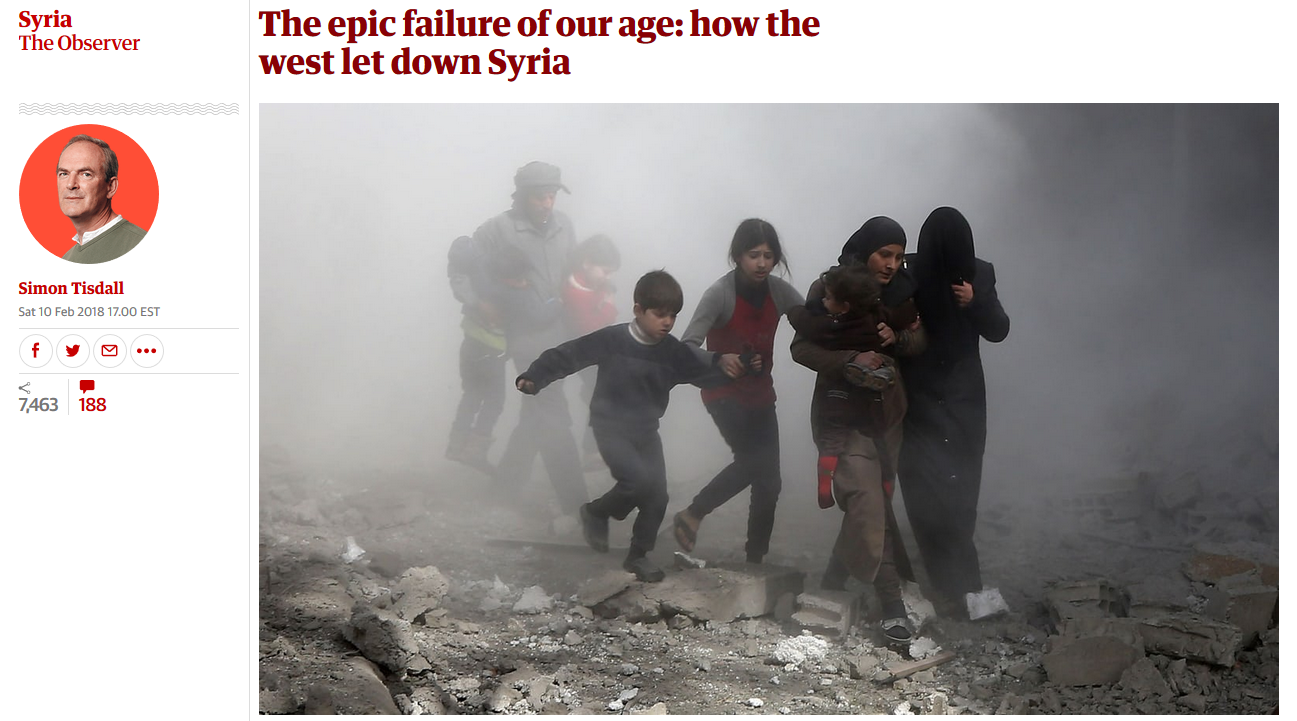 Simon Tisdall argues in the Guardian (2/10/18) that “the West let down Syria”—not by fueling a murderous civil war, but by failing to ensure that its chosen side prevailed in that war.

In the Guardian (2/10/18), Simon Tisdall described the US and its Western partners as “hovering passively on the sidelines in Syria,” and “restricting themselves to counterterrorism operations and vain calls for peace.” ABC’s Conor Finnegan (2/26/18) expressed concern that “the US will remain on the sidelines” in the country.

However, America currently controls 28 percent of Syria (Foreign Policy, 1/25/18), precisely the opposite of being “on the sidelines,” and has recently declared its intent to continue occupying the country indefinitely (New York Times, 2/22/18). As Joshua Landis (Syria Comment, 1/15/18), director of the Center for Middle East Studies, notes, the US controls “half of Syria’s energy resources, the Euphrates dam at Tabqa, as well as much of Syria’s best agricultural land.”

Anglo-American press coverage of the Syrian situation has grossly misled readers about their own governments’ role in the catastrophe, and has urged audiences to accept greater Western military intervention in the country without examining the implications of such a move. 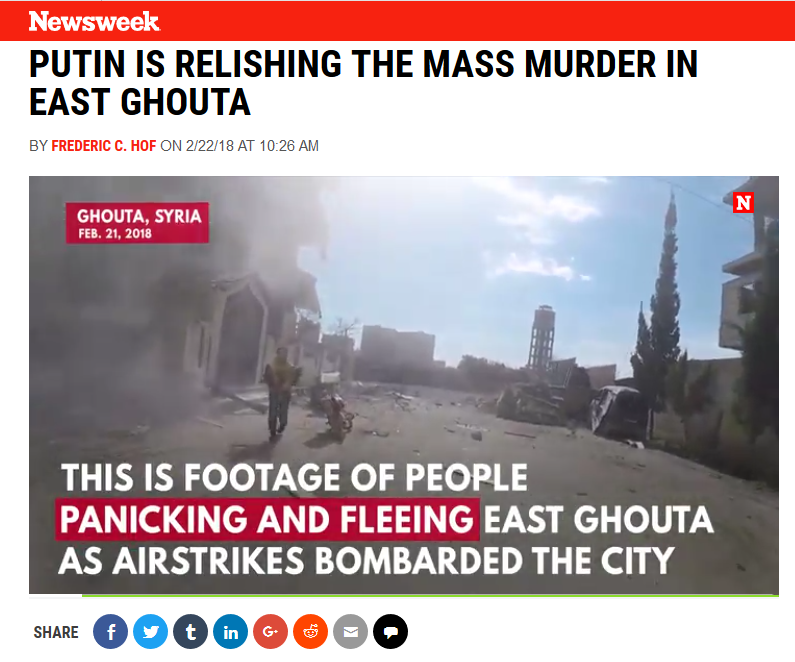 Newsweek (2/22/18) attributes sadistic glee to Russia when its bombs kill civilians—presumably distinguishing them from US bombs, which give US leaders no special pleasure when they kill civilians.

In Newsweek (2/22/18), Frederic Hof said that both the Obama and Trump administrations’ approach to Syria has been to offer “words of outrage from the United Nations ambassador accompanied by nothing else,” with Donald Trump’s April 2017 attack on Syria apparently being the one exception. ABC’s Finnegan claimed that “the Trump administration seems powerless to push back other than issuing condemnatory statements—a problem that has faced the US since the start of the Syrian civil war in 2011.”

Yet over the course of the war, the US has provided far more than “words of outrage” and “condemnatory statements” (FAIR.org, 9/30/15, 4/7/17). A covert CIA operation aimed at ousting the Syrian government, with a budget of $1 billion per year, was used to arm anti-government militias and run secret training camps in Jordan (Washington Post, 6/12/15).

The Guardian’s Tisdall asserted that

when the US and Britain did eventually intervene directly in Iraq and Syria, as part of a multinational coalition in 2015, it was to fight the direct threat to themselves posed by Islamic State.

Set aside that the US and Britain began bombing Iraq and Syria in the name of fighting the so-called Islamic State (aka ISIS) in 2014, not 2015 (Guardian, 8/8/14). According to Tisdall’s account, nothing the Western powers did prior to 2015 qualifies as intervention. However, the US has provided financial support for the Syrian opposition since at least 2012 (Reuters, 8/21/12), coordinating weapons shipments to them no later than May of that year (Washington Post, 5/15/12).

The Atlantic (3/01/18) ran a piece from Uri Friedman that was less amnesiac and more apologetic, arguing that the US

supported rebel groups and more recently has focused on battling ISIS—in one sense performing a humanitarian service in challenging the murderous Assad regime and uprooting the world’s foremost terrorist organization.

Yet opposition groups that the US has enabled have carried out serious crimes against Syrian civilians, often specifically targeting ethnic and religious minorities (Electronic Intifada, 3/16/17); calling support for such organizations “humanitarian” is a gross mischaracterization. Furthermore, that same American support for the opposition in Syria was a crucial source of ISIS’s strength. When US-armed opposition groups were either defeated by ISIS or joined them, the US weapons gave ISIS a major boost (Newsweek, 12/14/17). 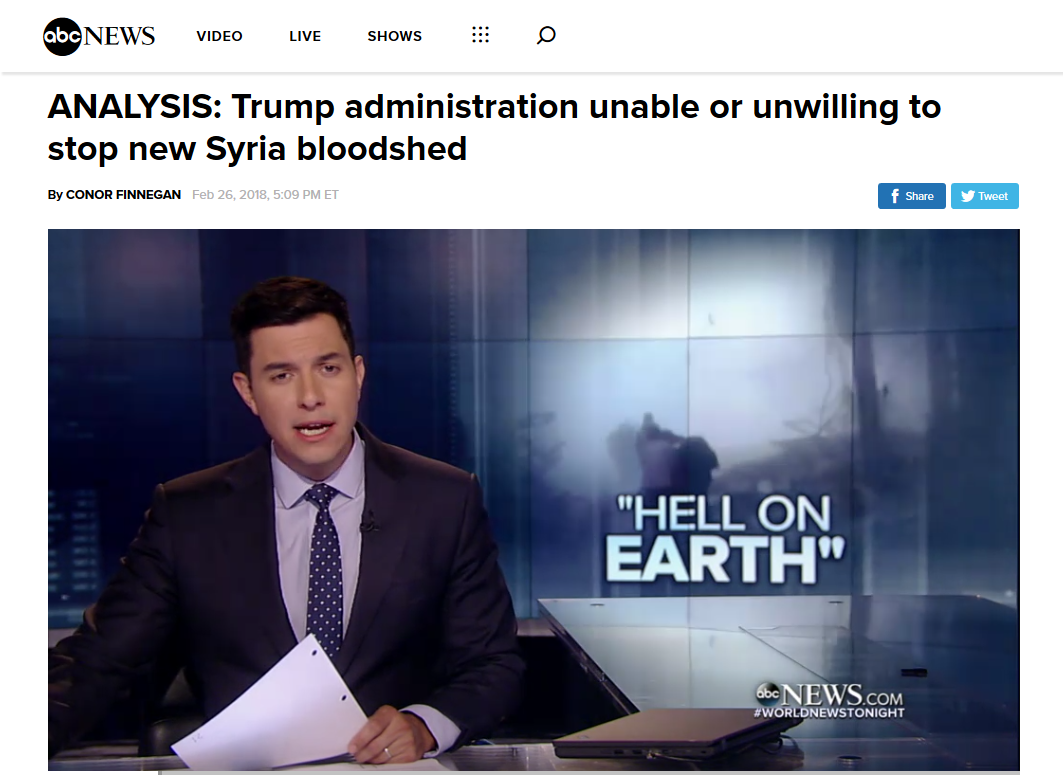 ABC‘s James Longman (2/26/18) describes Syria as “hell on Earth”—not because of the thousands of civilians killed in US bombing, but because the US is not willing to kill even more in an effort to stop the killing.

At ABC, Finnegan said that the Syrian war “has turned into a proxy fight by regional powers.” By failing to add that it’s also a global proxy war, he obscured the role of actors from outside the region. (That is, he obscured he US role; Russia’s presence is noted throughout the piece.) The article then collapsed into inconsistencies, reporting that “there is little appetite among the American public for increased military involvement”—an apparent admission that there is a military involvement there that could be increased, in contradiction with its earlier erasures of US activities in Syria. The article similarly refers to “US-controlled eastern Syria,” an acknowledgment that America is not “on the sidelines.”

Jason Burke of the Guardian (3/04/18) was also flagrantly inconsistent, writing that “armed opposition groups [in Syria] continue to receive logistical support and funding from the United States” and then in the next paragraph saying that “the US has stood back” in the war in Syria.

Protect Syrians by Killing Them 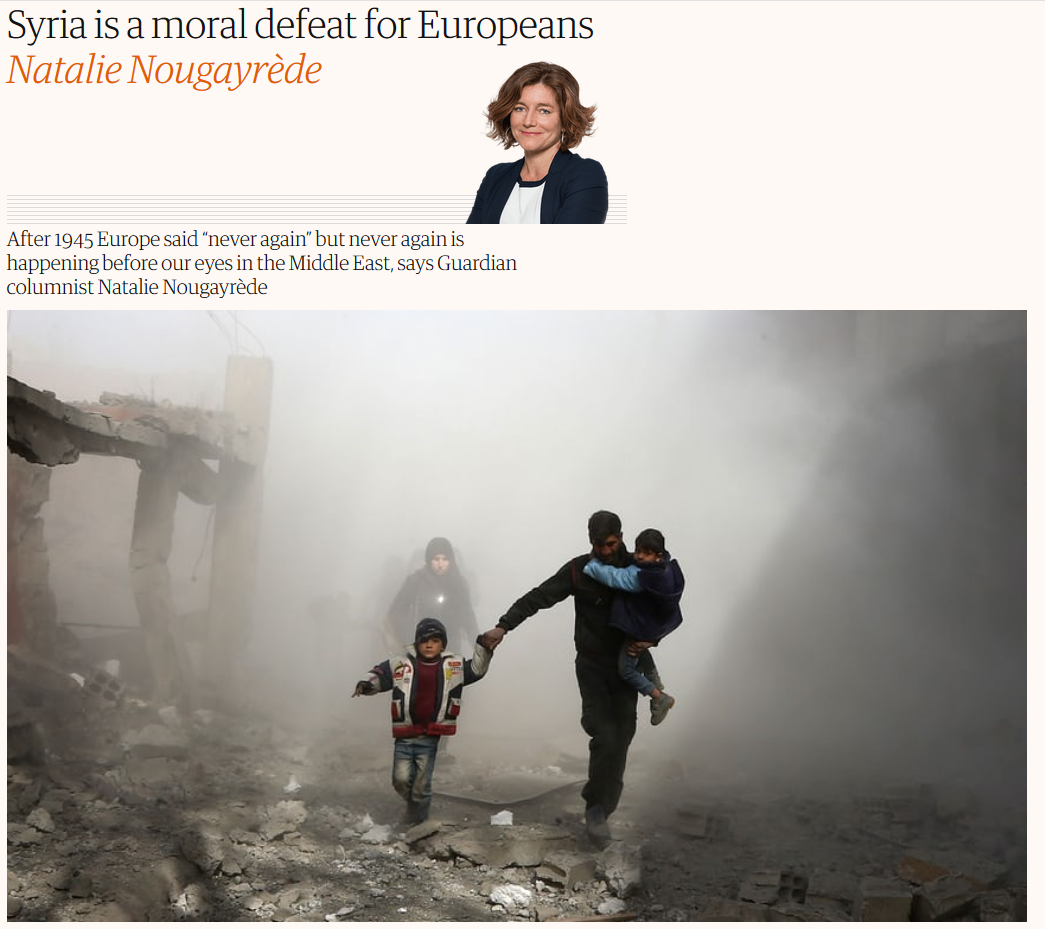 The argument against military intervention in Syria appears in the form of sarcastic parody by an advocate of intervention (Guardian, 2/27/18).

Reporting on the most recent developments in Syria is rife with claims that it’s necessary for the Western powers to overthrow the Syrian government in order to protect Syrian civilians. In the Guardian (2/27/18), Natalie Nougayrède proffered an evidence-free anti-anti-war tirade against what she called

the apathy of supposedly pacifist whataboutery. This is found on the radical left of Europe’s political spectrum, from London to Berlin and Athens. Its moral relativism drapes itself in “internationalism.” From the very beginning, Syria was too complex a crisis to identify sound allies, goes that thinking. The West is guilty, full stop. Regime change is bad—even when it is called for by desperate populations. Conflict is all about controlling oilfields. Sanctions and the stemming of financial flows can end it. Just talk and negotiate. Our pilots are as criminal as those of Putin—never mind the deliberate, repeated pounding of hospitals in eastern Ghouta. Beware the mainstream Western media. If we stop meddling in Syria, things will improve.

Hof, writing in the Atlantic (2/23/18) this time, argues that “unless the United States is seriously considering military strikes against Bashar al-Assad’s regime . . . any discussion of ‘what to do’ is empty.” 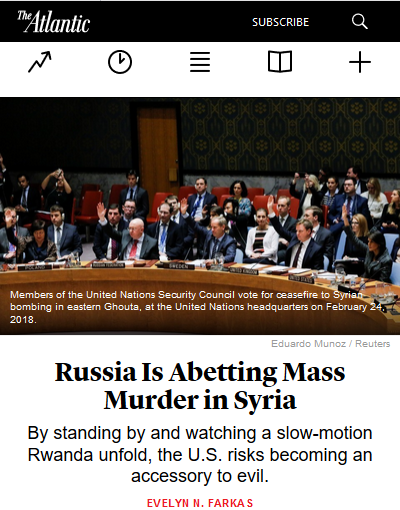 You won’t see the thousands of Syrian civilians killed by the US and its allies referred to as “mass murder” (Atlantic, 2/26/18)—indeed, you’ll rarely see them referred to at all.

Evelyn N. Farkas, in another Atlantic piece (2/26/18), wrote that Washington’s “insufficient political-military action” allows the war in Syria to continue, and criticized what she sees as “insufficient resolve on the part of the United States and its allies.” She then contended that “threatening—and if necessary using—force” against the Syrian government and its partners, and “ramping up sanctions, and increasing military and diplomatic pressure,” is the best way to “protect Syrians.”

These calls for an escalation of the war in Syria mislead readers by ignoring crucial aspects of the issue—including the fact that an invasion of Syria by the US and its allies would violate the UN charter.

The argument that the US military should save Syria rests on the assumption that American militarism is benevolent, both in intent and outcome. Advancing this position depends on erasing the key contributions America and its partners have made to Syrians’ misery, not only through the above-mentioned support for sectarian armed groups but also through the US-led coalition bombing ostensibly aimed at ISIS that likely killed at least 3,500 to Syrian civilians, through derailing diplomatic efforts that might have ended the war years ago (London Review of Books, 7/16/15), and through carrying out a sanctions regime that has undermined Syrians’ access to clean water, medical equipment and food.

The articles advocating a US regime change war in Syria also neglect to inform readers of the consequences of such wars. A comparable undertaking in Libya, far from ending the war in that country, left it riven by factional fighting that has no end in sight, and brought slave markets to the country (AlterNet, 12/5/17). Regime change in Iraq resulted in approximately half a million deaths there (PLoS Medicine, 10/15/13). Advocating that such steps be taken in Syria, without giving the audience a sense of what recent history shows the likely outcomes will be, constitutes severe media malpractice.