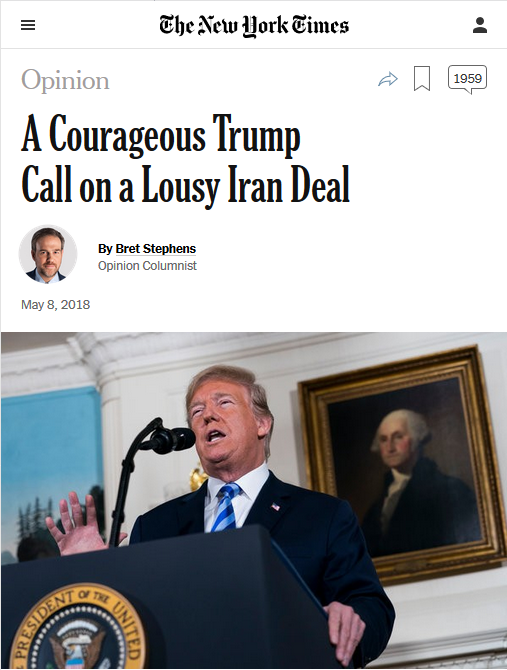 The New York Times‘ Bret Stephens (5/8/18) is glad Trump canceled the Iran deal because that allows the US to threaten Iran with “economic ruin and possible war.”

The debate in the New York Times and Washington Post over President Donald Trump’s decision to withdraw from the Joint Comprehensive Plan of Action (JCPOA), better known as the Iran deal, revolves around which tactics America should use to dominate Iran.

At one end of the spectrum of acceptable opinion is the view that President Trump was correct to withdraw from the deal because it supposedly failed to handcuff Iran to a sufficient degree. At the other is the far more common perspective, which is that Trump should have remained in the deal because it is an effective tool for controlling Iran.

In the New York Times, Bret Stephens (5/8/18) argued that the agreement did not achieve what he thinks should be the goal of US policy towards Iran, namely:

to put Iran’s rulers to a fundamental choice. They can opt to have a functioning economy, free of sanctions and open to investment, at the price of permanently, verifiably and irreversibly forgoing a nuclear option and abandoning their support for terrorists. Or they can pursue their nuclear ambitions at the cost of economic ruin and possible war.

Ending American participation in the deal makes sense, according to Stephens, because doing so puts Washington in a better position to threaten to violently destroy Iran in order to make it do want the US government wants. What he means by “support for terrorists” is unclear and evidence-free. 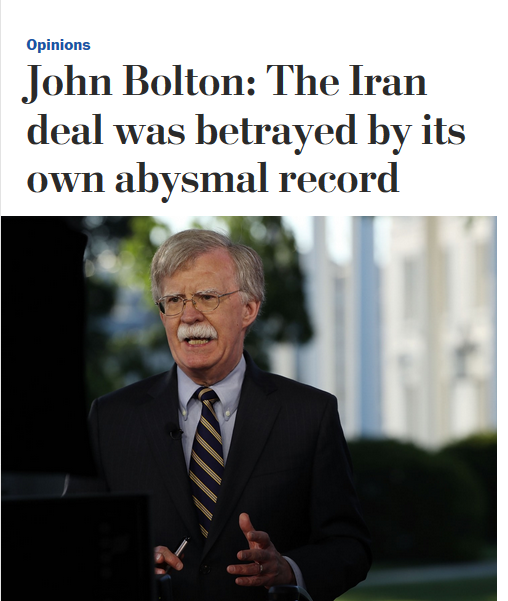 John Bolton (Washington Post, 5/9/18), one of the foremost advocates of the Iraq invasion and for regime change in Libya and Syria, accused Iran of “spreading an arc of death and destruction across the Middle East.”

The Washington Post (5/9/18) ran an incoherent piece by US national security advisor John Bolton saying that Trump needed to take the US out of the Iran deal because, since its implementation, Iran has not “focus[ed] on behaving responsibly.” In other words, he opposes the nuclear accord because Iran has proven itself too immature for the freedom from US control that Bolton wrongly suggests it is offered under the JCPOA.

Commentators who differed on Trump’s decision nevertheless shared the premise of those in favor of taking the US out of the deal, which is that Iran belongs under imperial stewardship.

Susan Rice, President Obama’s national security advisor, defended the Iran nuclear deal in the Times  (5/8/18) on the grounds that it “has served American interests.” “By withdrawing from the deal,” she writes, “we have weakened our ability to address [America’s] concerns” with Iranian policy.

Roger Cohen of the Times (5/8/18) took the same position, saying, “The question has always been: Do you change Iran by isolating it or by engaging it step by step? The nuclear deal was a possible starting point in engagement.” Trump, Cohen continues, “has done a grave disservice to American interests.”

In the Post (5/10/18), furthermore, David Ignatius criticized Trump for transforming Iran from “a manageable problem into a freewheeling, uncontrolled one.”

While analysts at the Times and the Post sit at different points within the parameters of permissible thinking, they have in common the view that Iran should be a ward of empire because otherwise it will interfere with the US’s global ambitions. Proponents and opponents of the Iran deal therefore debate it on the basis of whether it helps US ruling class efforts to secure global hegemony.

Stephens backed Trump’s move because he says that the agreement eased sanctions on Iran, thereby enabling the country to have more money with which to support its allies in Syria, Yemen and Lebanon. He says that “any [US] effort to counter Iran on the ground in these places would mean fighting the very forces we are effectively feeding. Why not just stop the feeding?” His position is that Trump is right to pull out of the deal because it enabled Iran to hinder US goals in the Middle East.

Bolton complained that “Tehran has poured billions of dollars into military adventures abroad, spreading an arc of death and destruction across the Middle East from Yemen to Syria,” ludicrously absolving the US/Saudi/UK coalition of its aggression against Yemen, and incorrectly assigning Iran sole responsibility for the bloodshed in Syria. That he was complaining about Iran’s support for forces that function as barriers to US domination in Syria and Yemen—support that is rather overblown in the Yemeni case—can hardly be seen as a coincidence.

At the other boundary of tolerable debate, Rice criticized Trump’s withdrawal because, she claimed, it meant that “Russia and China’s position in [the Middle East] will be bolstered at our expense.” In her view, Iran should be under US management for the purposes of imperial grand strategy. 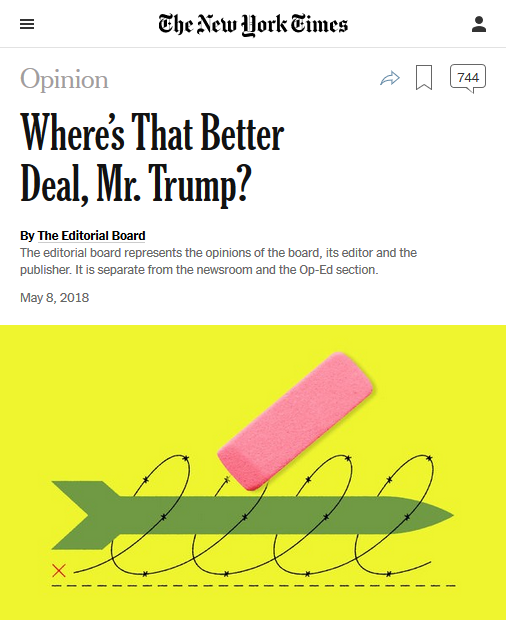 Advocates of the agreement with Iran also debate detractors in terms of whether the arrangement is effective protection against the Iranian nuclear weapons program, a curious exercise given that no such program exists.

Yet Stephens implied that one does, or that there is reason to suspect that one might, writing that under the JCPOA,

Iran is under looser nuclear strictures than South Korea, and would have been allowed to enrich as much material as it liked once the deal expired. That’s nuts.

Bolton obscurely suggested that Iran is pursuing nuclear weapons by saying that the JCPOA is based on the theory that Iran would “trade its nuclear ambitions for economic incentives,” while also writing that the deal has an “abysmal record” and “undermines the security of the American people.” Later he refers to Israeli revelations of a “trove of documentation of Iran’s past nuclear weapons program,” which he then says demonstrates that the US and Israel “are safer together than we are individually.”

Yet other writers argue that the US should have remained in the deal because it kept in check the nuclear weapons program that Iran does not have. A New York Times editorial (5/8/18) said:

When it comes to the danger of a nuclear arms race in the Middle East, there is no sign Iran or any of the other major powers in the existing and so far successful pact will simply fall in line with Mr. Trump’s notional new plan. More likely, his decision, announced on Tuesday, will allow Iran to resume a robust nuclear program.

The first sentence in this passage implied that Iran is involved in “a nuclear arms race,” or that there is reason to believe it likely will be part of one, even though there isn’t. Saying that Trump pulling out of the deal “will allow Iran to resume a robust nuclear program,” since it follows the phrase “nuclear arms race,” can easily be understood to refer to Iran’s  “robust” nuclear weapons program, which it does not have.

In the Post, likewise, Jennifer Rubin (5/8/18) argued that Iran “now can do what it pleases with its nuclear program—either choose to remain in the deal with the Europeans or proceed again with its nuclear weapons program.”

Rarely allowed into the debate is the notion that Iranians have the right to chart their own course free of US interference, or any accounting of the harm US sanctions inflict on the people of Iran–views that exist on the far fringes of respectable analysis, appearing in limited ways just once in each paper amid the deluge of opinion pieces written about the nuclear deal in recent days, and drowned out by the chorus calling for Iran to be held beneath the American boot.

That the US and its Israeli partner should cease their efforts to dominate the Middle East, or that America and Israel’s nonfictional nuclear weapons need to be abolished, are evidently inadmissible into public discourse.

You can send a message to the New York Times at letters@nytimes.com (Twitter:@NYTOpinion), and to the Washington Post at letters@washpost.com (Twitter @washingtonpost). Please remember that respectful communication is the most effective.