Janine Jackson interviewed Sam Menefee-Libey about a J20 prosecution update for the June 22, 2018, episode of CounterSpin. This is a lightly edited transcript.

Janine Jackson: Listeners know that Washington, DC, police mass-arrested more than 200 people, including journalists, during protests at Donald Trump’s inauguration, in which a few windows were broken and a limousine set on fire. Federal prosecutors have surprised some by vigorously pursuing felony riot charges against some of the so-called “J20 protesters,” resulting in decades of prison time, even those they acknowledge engaged in no damage or violence but were simply present, and in some cases reporting.

Perhaps the only hopeful part of what seems a clear effort to criminalize dissent is that the wheels seem to be coming off it. Joining us now to bring us up-to-date is Sam Menefee-Libey, an organizer and member of the Dead City Legal Posse, a community group that’s come together to support J20 protesters. He joins us now by phone from Washington, DC. Welcome to CounterSpin, Sam Menefee-Libey.

Sam Menefee-Libey: Thanks so much for having me. 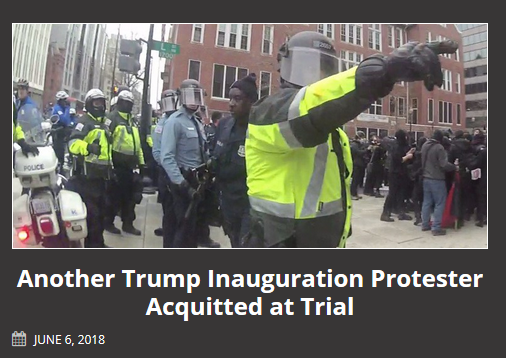 JJ: Unicorn Riot reports that a jury has just found another defendant not guilty on all but a riot charge, which the judge essentially dropped with a mistrial when the jury deadlocked. We’ve seen other jury acquittals, we’ve seen charges dropped. How many J20 defendants remain at this point, and what do you make of the current status of the government’s case against them?

SML: So there are 44 defendants still facing trial. There are currently two defendants awaiting a verdict on a trial that started May 14.

At the beginning of the show, you noted a limo was set on fire on Inauguration Day. That actually happened five hours after the anti-fascist, anti-capitalist march was kettled. So it was an unrelated incident, and that’s been sort of an ongoing question, especially with media coverage. Many stories, especially in mainstream media, have used the limo fire as sort of a splash page, and it doesn’t have anything to do with this particular case.

So the cases, I think, are looking good right now. There have definitely been some positive developments over the past three weeks, from the Chief Judge Robert Morin of the DC Superior Court finding that there was an ongoing Brady violation by the US attorney’s office, in withholding dozens of videos with exculpatory value from the defense for over a year. That led to the dismissals of charges for ten defendants, and dismissals with prejudice on the conspiracy charges, as well as an order by the chief judge that the US attorney’s office could not proceed with the theory of the case based on Pinkerton liability, which would make it much harder to engage in the sort of blanket prosecution they’ve been doing.

So things are looking up right now, but they’re far from over. Unfortunately, there were four defendants in the middle of their trial when that Brady violation was found, and the evidence from the videos from Project Veritas, that was the subject of the Brady violation, had already been shown in court to the jury. There weren’t really any corrective measures for that. And so two of the defendants who are awaiting verdicts from the jury are set up in a difficult position, having known that there was this Brady violation, that there was this extraordinary development in the case, that wound up not yet having an impact on their trial, and their lives are in the jury’s hands.

JJ: I’m going to draw you out a little bit on, we’re calling it a Brady violation. It means the prosecutors withheld evidence that could have been exculpatory. In this case, we’re talking about elements from a video from a group—you said it quickly, I’m not sure if folks remember—Project Veritas. This is a group we know about. You might call them an entrapment group. They’re known for sleazily editing videos to put forth their particular point of view, but what, if you could tell us, what is the bit that they cut out of the video that was presented to the jury, and why did it matter?

SML: Yeah, so the US attorney’s office and the Metropolitan Police Department have, throughout the entire duration of this case, over the past 17 months, used a bunch of videos from right-wing sources, including Project Veritas, the Oath Keepers, the Media Research Center, Rebel Media and others. Project Veritas is known, especially, for editing videos, yet the lead detective on the case, Detective Gregory Pemberton, admitted that he never looked into whether or not the footage that they received from Project Veritas was edited in any way, that they had no reasons to believe that it was; they made two small edits on their own. This is what they represented to the court repeatedly, for over a year. 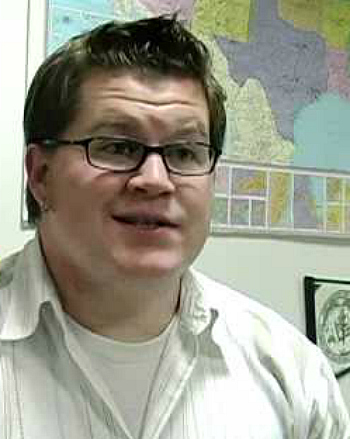 Sam Menefee-Libey: “Both the US attorney’s office and the Metro PD exhibited remarkable lack of curiosity about the veracity and authenticity and reliability of the information that they got from Project Veritas.” (image: Generation Progress)

Then it turned out that they’d actually lopped off a more significant portions at the beginning and the end of the video, that included conversations between the Project Veritas person and multiple others after the meeting in question, and then a discussion that the Project Veritas person had with someone on the phone, saying they “don’t know about any of the upper echelon stuff.”

The defense talked to this person who recorded these videos, and he said that he had no indication that anyone was planning violence, which is the reason that the prosecution claims that video was significant.

Though that’s the gist of that particular video, there are also 69 additional recordings that the prosecution withheld from defense counsel, and again, both the US attorney’s office and the Metro PD exhibited remarkable lack of curiosity about the veracity and authenticity and reliability of the information that they got from Project Veritas.

JJ: I’m going to bring you back to media coverage and that linking the protest to violence, and the defendants to violence, even when in many instances that’s not the case that the state is trying to make. They will say, “We don’t have any evidence that this person broke a window,” and that’s been part of the problem with the whole thing, is they are saying, “But they were there,” or, “They were dressed like people who we think may have been engaged in something,” but they’ve acknowledged, really from the beginning, that the burning limousine had nothing to do with the people who were arrested. It’s the media who’ve gotten that wrong. 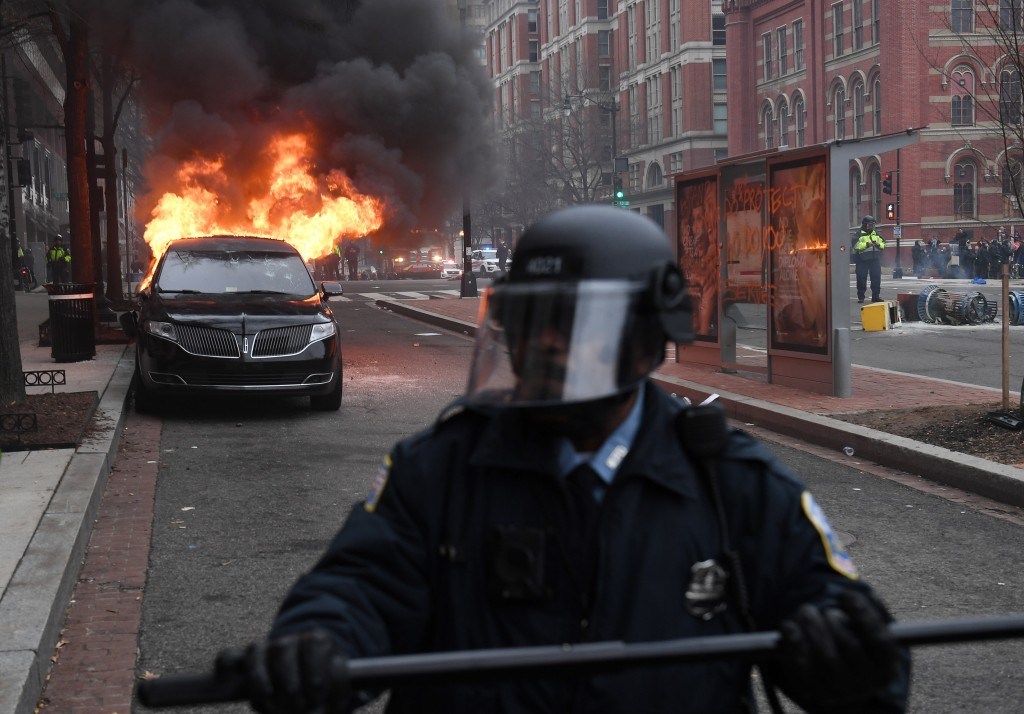 SML: The media coverage of this case from the beginning has been sloppy when it’s been present at all. There were notable stories from the Washington Post, from USA Today, from CNN and several others that tried to link the burning limo to the defendants, and then were very cavalier about not issuing corrections or issuing very minor corrections when they’re called on that. The Washington Post, actually, the editorial board, released an op-ed late last summer saying that no one should have any sympathy for these defendants, and that it wasn’t worth paying attention to. That was a real drag from the hometown newspaper here, but certainly not surprising, based on the Washington Post’s track record in recent years.

Now, when I see that degree of laziness—I guess both of them were working off of a state press release of some sort, though neither attributed it; both reporters used it as it were their own words—that laziness is indicative, as you’ve just said, of the disinterest that corporate media have shown toward this case. The New York Times editorialized against the DreamHost data dragnet, when  prosecutors where trying to get info on anybody who looked at the Disrupt J20 website, but you sensed that the paper was making a distinction between the innocent people who might get caught up in that dragnet and those who were charged, who at the time still included photojournalist Alexei Wood—you know, a journalist.

You would hope that they would at least identify with their own, but when the charges were dropped against Wood, the Times reported that under the headline, “Journalist Charged With Rioting at Inauguration Day Protest Goes Free.” You know? Nowhere did we see a vigorous defense of protest, of dissent, much less of reporting on dissent from the very folks we would look for it from. 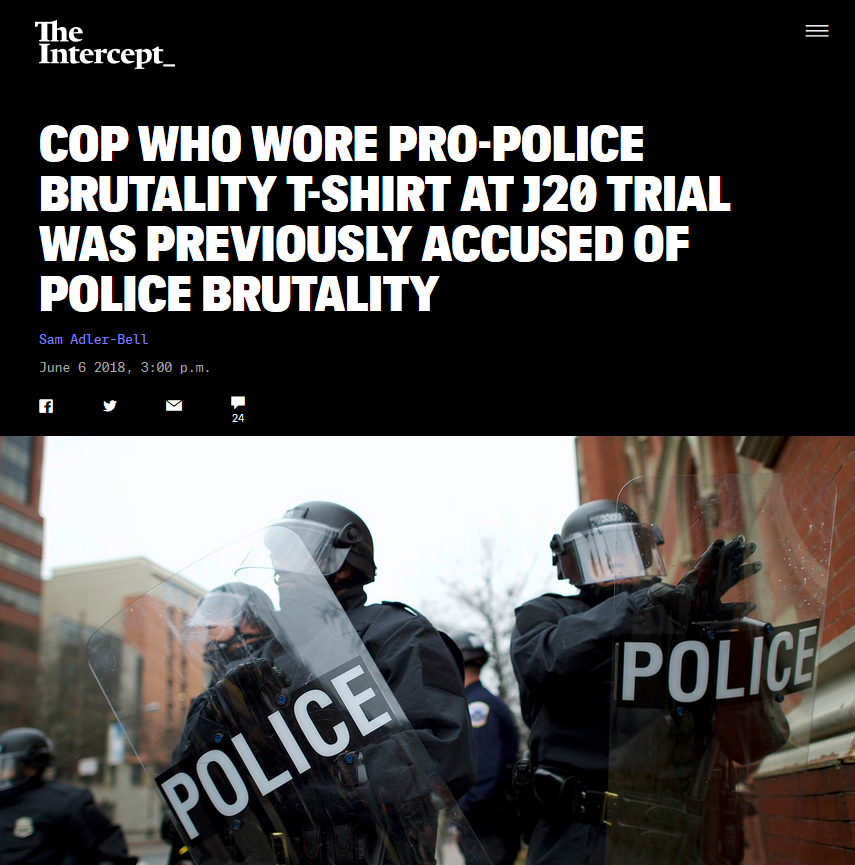 SML: Yeah, I mean, FAIR’s own Adam Johnson has done really good work looking at how corporate media tend to just reprint state press releases from prosecutors and cops, with only minor alterations, and call it “news.” I think that’s happened a lot in this case. There are a lot of things at stake in this case, and that there are very interesting origins of it.

And a lot of other things: that the riot statutes that’s being used in this case was passed by Congress before DC got so-called Home Rule; it was actually passed in response to the uprisings in Detroit and Newark in 1967. This is an effort to bring back an old racist law to prosecute dissenters in the 21st century.

There’s also been a huge amount of work done by community activists in DC for years around police brutality and the practices of Metro PD that we’ve seen linked to this case some. Yesterday there was a story from journalist Sam Adler-Bell, talking about a police witness in this trial who wore a shirt joking about police brutality, and had actually been the instigator in a very disturbing incident of police brutality against a family in 2008. So I think there a lot of things that are happening here; questions about the First Amendment, which, of course, the New York Times loves and the Washington Post loves, but they’re not digging into those questions here.

JJ: We’ve been speaking with Sam Menefee-Libey, organizer with the DC Legal Posse. Their website’s DCLegalPosse.org , but you can also follow this case at RightsAndDissent.org and UnicornRiot.Ninja. Sam Menefee-Libey, thank you so much for joining us this week on CounterSpin.