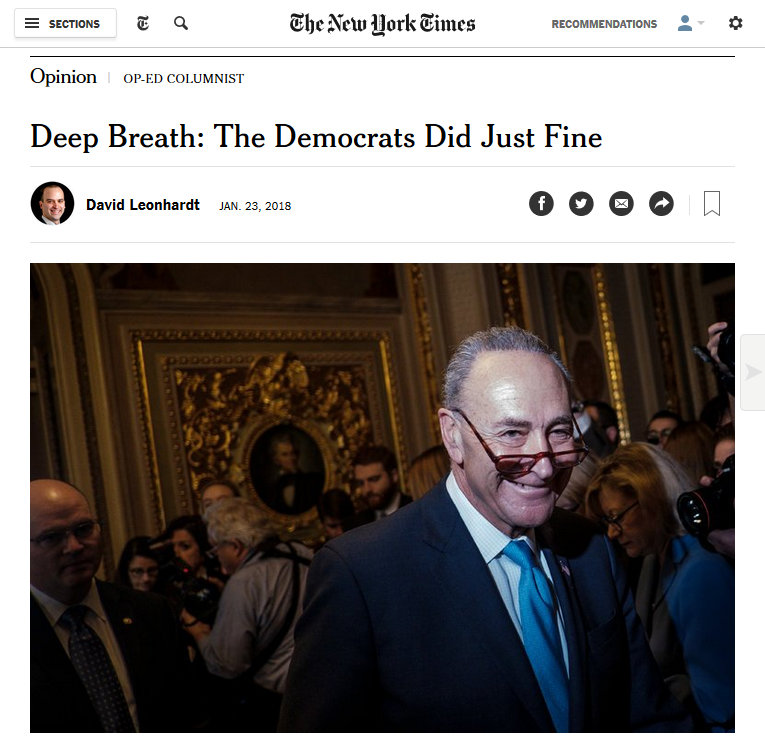 Speaking for the media consensus, David Leonhardt (New York Times, 1/23/18) wrote that “Democrats made a smart move to reopen the government.”

The opinions showcased during the recent government shutdown in three major US newspapers—the New York Times, Washington Post and Wall Street Journal—showed a striking lack of concern for the fate of the Dreamers and many variations of the same take on the need for a “bipartisan compromise” for immigration reform.

Out of 34 op-eds and editorials from three days before to three days after the shutdown (1/17–25/18), only Times columnist Michelle Goldberg (1/22/18) criticized the Democrats for selling out the Dreamers—young undocumented immigrants who had been granted limited protection by the Obama administration—by agreeing to end the government shutdown in exchange for a vague promise for a future vote from Senate Majority Leader Mitch McConnell. Most of the op-eds and editorials argued that giving up on the Dreamers was an inevitable or smart choice for the Democrats, or that securing a resolution for the Dreamers wasn’t worth a government shutdown.

Despite some criticism of President Donald Trump and the Republican leadership’s unreliability and dishonesty as negotiating partners (New York Times, 1/19/18, 1/23/18; Washington Post, 1/19/18, 1/22/18), none of the opinion pieces advocated for the Democratic Party to hold out for a clean DREAM Act that would provide a pathway to citizenship for Dreamers that isn’t tied to a concurrent clampdown on immigration.

The 20 columnists and op-ed contributors were 90 percent white (and 80 percent male); none were Latino, the ethnicity most associated with the Dreamers. While corporate media allowed space for pundits, former government officials and editors of right-wing publications to opine on how both major parties should handle the US’s immigration system, they couldn’t find room for contributions from Dreamers themselves, immigration activists or any representatives from the left. 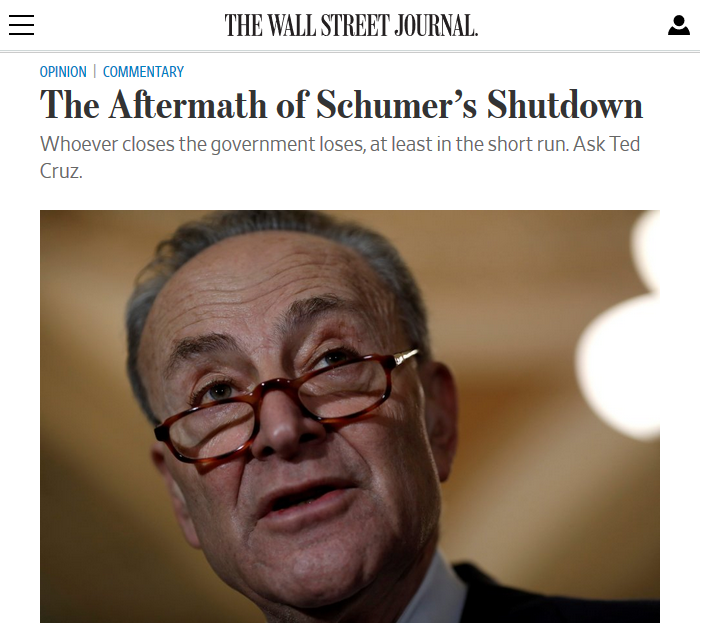 In the Wall Street Journal (1/24/18), Karl Rove argued that “Democrats lost on the process question of closing the government.”

From the conservative end of the corporate media spectrum, the Wall Street Journal’s editorial board could scarcely contain their glee at Democrats’ failure to secure a better outcome for undocumented youth, calling the shutdown a “futile and stupid” gesture, while simultaneously portraying the Trump administration as minimizing the negative effects of the government closure (1/21/18, 1/22/18). The Journal allowed op-eds from Bill Galston (1/23/18) and Karl Rove (1/24/18) to repeat the same message in different ways by arguing that “the way forward is clear” for a bipartisan compromise, and that both parties can get “some of what they want” as long as they “don’t insist on getting everything.”

Though on the other side of the corporate media spectrum, the New York Times opinion pages were hardly different in substance. Even as they disagreed among one other, the Times’ columnists managed to concur that creating a pathway to citizenship for Dreamers wasn’t worth a government shutdown. While David Brooks (1/22/18) lambasted the Democrats as stupid and incompetent, David Leonhardt (1/23/18) praised the Democrats’ agreement to reopen the government as a “smart move.” Gail Collins found herself admitting that her dialogue with her racist, climate-denying colleague Bret Stephens (1/22/18) wasn’t very substantive, because while she thought Trump’s wall was “stupid and offensive,” she agreed that “it’s not worth shutting down the government forever.” 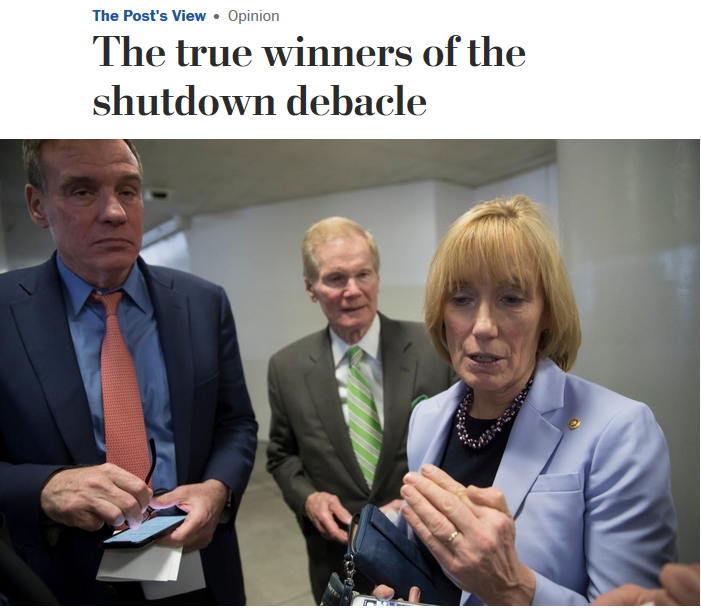 For the Washington Post (1/22/18), the “true winners” were ” a bipartisan group of 25 senators spent the weekend talking instead of excoriating one another.”

The Washington Post’s opinion space didn’t differ very much from the Journal or the Times in substance, as its editorials also called for bipartisan compromise—“why choke on a full loaf when half a loaf will do?” (1/17/18)—and called the bargain to reopen the government a “reasonable one” that “moderate lawmakers” can build upon (1/23/18). Post columnist Fareed Zakaria  (1/18/18) went so far as to characterize Democrats as “extreme” on the issue of immigration, and insisted on finding a “middle ground” despite Trump’s discussing the issue “in ways that seem, to me, racist.”

The Post  (1/17/18) even found room for an op-ed from Christopher Buskirk, the editor of a far-right website that called on Trump to overthrow the US’s political order, who pleaded for Trump not to “betray” his base and to reject a clean DREAM Act. Strange how all the “moderates” ended up taking the same position as the right-wing extremist.

Corporate media opinion-makers internalize the political needs and priorities of both major parties’ elected officials (Politico, 1/24/18), even when those officials’ political instincts are actually remarkably bad. Why should top papers relentlessly reiterate the same solemn calls for Democratic lawmakers to betray their base, even with major support from the American public for a humane approach to immigration, while marginalizing the demand that they represent the will of the people?