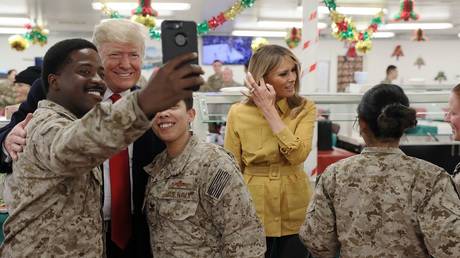 Pundits who bemoaned President Donald Trump wasn’t visiting troops overseas on Christmas lamented when he did so, accusing him of revealing identities of Navy SEALs in Iraq. They also attacked Trump-supporting service members.

During a surprise visit to the Al Asad Airbase in Iraq on Wednesday, Trump gave a speech to cheering troops, signed some soldiers’ red Make America Great Again hats, and posed for photos and videos – including with a group in full special forces gear. He tweeted out the video after Air Force One departed Al Asad, to a destination yet unspecified.

Pundits back in the US cried foul, denouncing the video as a violation of operational security for revealing the presence of SEAL Team Five in Iraq. Newsweek ran a story quoting anonymous “current and former” Pentagon officials arguing this point, with the only named source being Russiagate conspiracy theorist Malcolm Nance.

“Revealing them casually, through an unusual media exposure even if it’s the commander in chief, would prove a propaganda boom if any of this personnel are detained by a hostile government or captured by a terrorist group. There would be no denying who you are and what you do,” Nance told Newsweek.

Wondering where SEAL Team Five is? — pool report from Iraq: Trump also paused to take photos and selfies with many service members. At one point Kyu Lee, told Trump he was the chaplain for Seal Team Five. Lee recalled Trump telling him: “Hey, in that case, let’s take a picture.”

Other media outlets picked up the take on Thursday morning, accusing Trump of endangering the troops by revealing their presence. The Pentagon referred all questions to the White House, perhaps because their public relations office is staffed by civilians who are on furlough due to the government shutdown.

Yet even some of those who agreed with Nance’s objections to showing the Navy Seals’ faces saw fit to point out that Team Five was in Iraq openly, not covertly, as part of the advisory mission to fight Islamic State (IS, formerly ISIS/ISIL).

This is overwrought. It’s unusual to show these guys’ faces, but they are part of the “white” SOF advisory task force CJSOTF-I, not JSOC operators, and their mission is not “covert.” https://t.co/zMyJJZzpXi

That was not the end of the media crusade against Trump, though. From Iraq, Air Force One traveled to the Ramstein Air Base, the primary US military hub in Germany. While the plane refueled, Trump visited with the troops there. Reporters in the US first griped about the inhumanity of dragging troops out of bed in the middle of the night, before they saw photos and video from Ramstein of some service members waving Trump flags and MAGA hats.

That got them seeing red.

Soon, the very same Malcolm Nance who complained about Trump supposedly doxxing the SEALs in Iraq now demanded a House investigation into the troops in Germany.

Other journalists and commenters joined in the calls to name and shame the service members, and even prosecute them under military laws, for sporting Trump campaign merchandise.

Then there were pundits and celebrities who took credit for “shaming” Trump into making the trip, even though the president was already flying over Europe when they tweeted NBC News’ tepid take, and presidential trips are not embarked-on at a moment’s notice.

Though Trump seems to be getting this kind of media treatment no matter what he does, Thursday’s pearl-clutching seems to be an extension of last week’s hysterics after he ordered the withdrawal of US troops from Syria and Afghanistan.