Amid a string of resignations and huge backlash from rebel MPs, Prime Minister Theresa May still believes her draft Brexit deal with the EU will help secure British jobs, protect borders, and smooth the UK’s exit from the bloc.

In a combative piece for the Sun on Sunday, May insisted that the preliminary agreement she recently negotiated with Brussels will be “a deal that works.” Reiterating the main points of the draft Brexit accord, she maintained that “the course I have set is the right one for our country.” 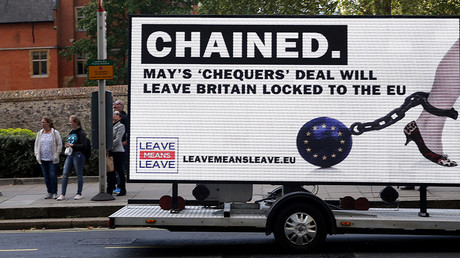 Lamenting some “difficult decisions” that she had to make, as well as the recent string of cabinet resignations, May argued that the deal will first of all end the free movement of immigrants into the country. “For the first time in a generation or more we will decide who comes to this country and, just as importantly, who does not,” the defiant prime minister said.

Going further, May suggested her Brexit deal will protect “millions of British jobs across the country,” end sizeable annual payments to the EU budget, and make sure the European Court of Justice has no jurisdiction over the UK.

“Make no mistake – the hard-fought deal that is now in sight will do all of those things,” she wrote. In the end, May claimed that her deal will let London and Brussels divorce smoothly but “not letting it drag on forever” – the promise which critics say is impossible to deliver.

For the main part, the article seems to be a last-ditch effort to win some of the public trust amid Brexit turmoil. It also comes at quite an uneasy time for the beleaguered prime minister as she faces growing rebellion among fellow Tories and a massive backlash from the opposition.

On Wednesday, May stated that the draft deal – published in full by the European Commission – is the best that could be negotiated, and is in the country’s interest. She then suddenly raised stakes, saying that “the choice before us is clear – this deal or leave with no deal.”

Nevertheless, it emerged that multiple backbenchers were calling publicly for a no-confidence vote in May’s leadership. By the end of this weak, the number of rebel MPs grew further, and some observers even predicted that May is in danger of losing her job.

READ MORE: End of May in November? ‘UK PM will be very lucky to get through the weekend’

She had managed to secure cabinet approval for the draft Brexit deal after a five-hour meeting at 10 Downing Street on Wednesday, but it was followed by a string of high-profile resignations.

Shailesh Vara, the minister of state at the Northern Ireland Office, was the first top official to resign. Dominic Raab – the man charged with negotiating and finalizing the deal – followed suit, as did Esther McVey, secretary of state for work and pensions. More resignations followed, bringing the total number of departures to seven.

Raab, himself an ardent Brexiteer, attacked May on Sunday, claiming that the prime minister had effectively caved in to EU “bullying.” He stated: “If we cannot close this deal on reasonable terms we need to be very honest with the country that we will not be bribed and blackmailed or bullied and we will walk away.”