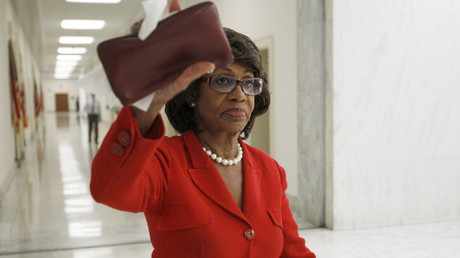 Passions are running high in Washington in the aftermath of testimonies from Dr. Christine Blasey Ford and Donald Trump’s Supreme Court nominee, Brett Kavanaugh, who she accused of sexual assault more than 30 years ago. While the two were giving emotional speeches and responses before the Senate Judicial Committee on Thursday, somebody leaked personal data of senators Lindsey O. Graham, Mike Lee and Orrin G. Hatch, including phone numbers and home addresses.

Several right-wing outlets reported that the leak was coming from the office of Waters. The Democratic Congresswoman said in a strong-worded statement that she was “utterly disgusted by the spread of the completely false, absurd, and dangerous lies and conspiracy theories that are being pedaled by ultra-right wing pundits, outlets and websites.”

She also said that the Capitol Police and an internal IT specialists determined that her staff had nothing to do with the doxing.

Thanks Auntie Maxine. Keep fighting for us.

To all of you on this post showing hate towards the Honorable Maxine Waters and calling yourselves “Americans,” there is rule of law in America. That rule is we are ALL “Innocent until PROVEN guilty!” She doesn’t have to prove anything to any of YOU! Keep it 💯 Congresswoman!

Waters is known as a passionate critic of Trump, who said that her biggest wish was to see the president removed from office as she celebrated her 80th birthday in August. The representative for California District 43 was also filmed encouraging her supporters to mob the current administration members if they are met in public places. “You get out and you create a crowd and you push back on them, and you tell them they’re not welcome anymore, anywhere,” she said.

However, online commentators argued that the denial only confirmed that the Congresswoman’s guilt, while her temper makes her unfit to hold the office in the House of Representatives. Some Democrats said that Kavanaugh’s anger during the hearing makes him unfit for office.

This denial is angry. This suggests she doesn’t have the temperment to be a Member of Congress. When someone is accused of something they didn’t do, they must not be angry. They must not be defiant. They must not question the motives of the accuser. They must be calm and serene. https://t.co/IcMiozv5mk

Sorry Maxine we simply can’t take you at your word.
If you agree to an FBI investigation on yourself, staff and family along with a polygraph we will consider the results and make our decision. These angry outbursts you have are not looking good for you. New rules.

You seem angry.
You don’t possess the disposition to be a member of Congress.
The accuser must be believed.
As the accused, you must remain calm.
No one has come forward to verify your statement.
Therefore, you are guilty.
Welcome to the new #Democrat rules.

Sorry Maxine, you’ll have to prove your innocence. That’s the world we live in now. I’m afraid we can’t take your word for it.