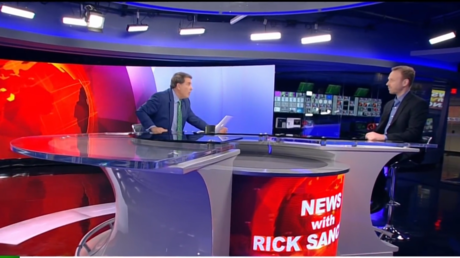 The anti-Damascus lobby in the US has coerced a bookstore in Washington DC to “postpone” the launch of investigative journalist Max Blumenthal’s new book, which exposes dirty secrets of US regime-change tactics, he has told RT.

The award-winning author was due to speak at the Politics and Prose bookstore in US capital on Wednesday night, before the organizers abruptly “postponed” the event, citing possible security and “substance” concerns. The Syrian American Council is to blame for the cancellation, Blumenthal told RT.

“The Syrian regime-change lobby has targeted me, tried to silence me. And they targeted Politics and Prose [bookstore],” the journalist said.

What we’re seeing is a censorship campaign to cover up one of the greatest scandals of our time.

I was told by @PoliticsProse that @sa_council led the intimidation campaign to cancel my book talk. This is the group that hosted an open advocate of the genocide of Syrian religious minorities at their gala & which lobbies Trump for war. Moral hypocrisy. https://t.co/qnGgNuAYnT

In his new book ‘The Management of Savagery: How America’s National Security State Fueled the Rise of Al Qaeda, ISIS, and Donald Trump’, the author exposes how the US has spent billions on training, arming, and guiding extremist insurgents for the last 40 years.

Also on rt.com
‘What kind of a dictatorship is this?’ Max Blumenthal on Venezuela cops protecting coup leader


Blumenthal also argues that American covert proxy wars, supervised by the CIA, have destabilized entire societies, caused the refugee crisis and spurred the resurgence of xenophobia and ultra-right politics in the Western world, which Donald Trump has “exploited on overdrive.”