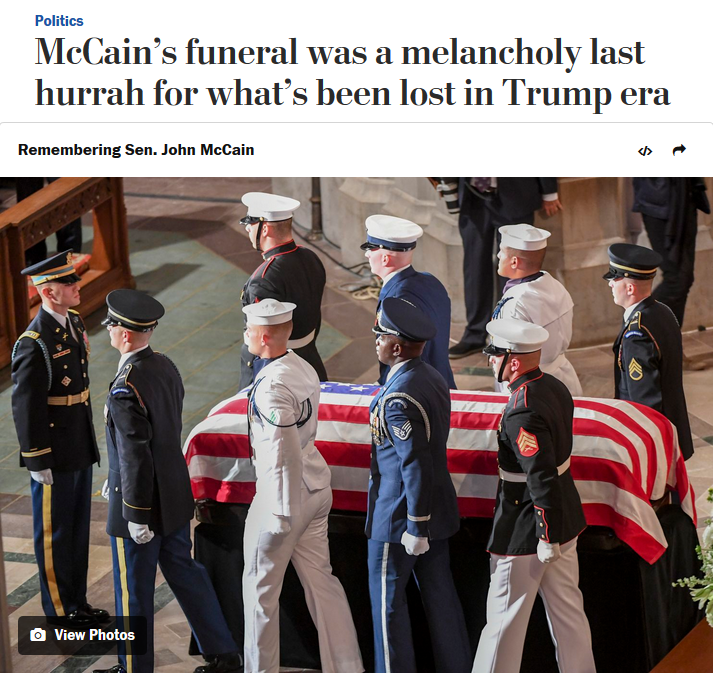 The Washington Post (9/1/18) reported on the McCain funeral as a “united defense of the Washington institutions that have been a cornerstone of American democracy,” including “the CIA, the Justice Department and the news media.”

Elite media insist they’re engaged in challenging the imperious presidency of Donald Trump. But their support for US imperialism itself remains vigorous, as coverage of the funeral of Sen. John McCain showed clearly.

the full tableau of his funeral—which included the previous three presidents and every major-party nominee for the past two decades— . . . served as a melancholy last hurrah for the sort of global leadership that the nation once took for granted.

“Global leadership” is a vacuous euphemism media employ that carries the assumption that the US plays a decidedly positive role in world affairs, even as the same outlets report on dozens of Yemeni schoolchildren killed by a US-made bomb, for example, or on Syrians in devastated Raqqa, whose families could be expected to reach a different conclusion.

“Global leadership” also suggests that nations consistently and voluntarily seek to emulate the United States. However, history is replete with examples of countries seeking to chart a course independent of Washington to varying degrees, and being violently attacked by the US as a result—from Guatemala to Cuba to Chile to Nicaragua to Iran to Vietnam, to cite only a few of the practically endless cases.

Much of the praise for McCain focused on his vision of the United States as a global superpower and moral beacon, positions Trump has been accused of abandoning. His longtime friend, former Sen. Joseph I. Lieberman, lauded McCain’s globe-trotting ways and his advocacy on behalf of political prisoners and dissidents in far-flung places such as Myanmar and Syria…. Yet more than ever before in the post–World War II era, McCain’s vision of the United States as the bulwark against tyrants, guarantor of global stability and refuge for the oppressed is out of favor.

By giving credence to characterizations of America as a “moral beacon” and a “bulwark against tyrants, guarantor of global stability and refuge for the oppressed,” the reporters legitimize US international supremacy. Nothing in their article raises any doubt about whether it makes sense to describe as a “guarantor of global stability” a state currently involved in seven wars, all of which it initiated.

Or whether a country loses its “moral beacon” status for bombing and killing more than 6,000 civilians, as the United States has in Syria since 2014. Or whether one can be a “bulwark against tyrants” while underwriting an Israeli government that since March 30 has massacred 179 Palestinians, including 23 children, two journalists, three paramedics and three people with disabilities. 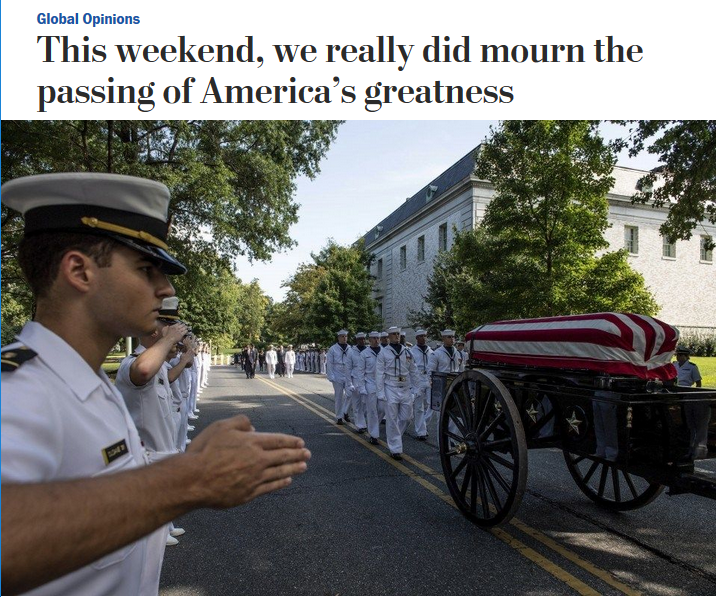 Anne Applebaum (Washington Post, 9/3/18) calls for “a new vision of genuine American greatness” that might require “people who can understand cybersecurity and online manipulation.”

Post columnist Anne Applebaum (9/3/18) echoed concern that McCain’s funeral “marked the end of a particular vision of American greatness.” She expressed faith that “America can still inspire, and America can still lead,” but feared that until new figures emerge to fill the void left by McCain’s allegedly sterling foreign policy record, “the world really will be mourning the passing of American greatness.”

The paper’s Jennifer Rubin (9/3/18) proposed “launch[ing] a party built on the ideals McCain propounded,” the first of which was

American leadership based on American values: Support democratic allies and the international economic system that has existed for 70 years. Stand with freedom-seeking peoples struggling against oppression.

as long as one is aligned on the big things—sticking to the facts, defending our alliances, standing up to international bullies, opposing assaults on the First Amendment and bolstering the rule of law.

What Rubin and others occlude is that in those 70 years, no government on Earth has carried out international aggression with a frequency remotely comparable to the US, most recently to devastating effects in Afghanistan, Iraq, Libya, Syria and Yemen, which suggests it’s the US that’s the international bully most in need of standing up to. Moreover, Washington is actively propping up dictators crushing “freedom-seeking peoples struggling against oppression” in Honduras, in Egypt, and in Saudi Arabia and the other Gulf monarchies, to name only a few of many examples.

Far from having retreated from the world stage under Trump, as these articles imply, Washington has between 800 and 1,000 military bases in other countries, while only 11 other countries have bases in foreign nations, and these total 70. The US has the highest military expenditure in the world, spending more on its war machine than the next seven highest-spending countries combined, and doing so at an accelerated rate in the Trump era.

The point of the Post’s inversions of reality is to convince people that the US ruling class needs to be in the charge of the world to ensure peace and freedom, when in fact that same ruling class is responsible for an exceedingly large share of war and repression. And if the US can be depicted as a “refuge for the oppressed”—rather than a country with the highest incarceration rate in the world, disproportionately imprisoning the poor and ethnic minorities—then it can claim a moral pretext for policing other countries’ oppression.

Spreading and cementing the unexamined and spectacularly false assumption underlying the handwringing over America’s supposed surrender of its empire—that such a measure would be undesirable—was a central task performed by the coverage of McCain’s funeral.