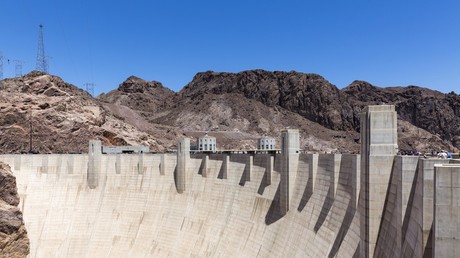 A man who was reportedly armed blocked traffic going both ways on the Hoover Dam near Las Vegas, eventually getting arrested on the Arizona side, the Nevada Highway Patrol said.

Officers from the Arizona Highway Patrol, as well as Lake Mead, Boulder City and Las Vegas police all responded to the scene, according to local media.

The man was described as being armed with a “machine gun,” the Las Vegas Sun reported, citing Metro Police Officer Jay Rivera. Authorities have not been able to confirm the report, however.

“The facility is closed and tours suspended until further notice,” the United States Bureau of Reclamation, which manages the dam on behalf of the Department of the Interior, said on Friday afternoon.

According to photos published by the local TV station KLAS, the suspect was inside an armored truck, and had taped written notes to the window.

One of them said “Mr. President release the reports,” according to a witness quoted by KLAS.

The suspect eventually drove over the bridge into Arizona, where he was arrested “without incident,” the Nevada Highway Patrol said.

Traffic on Highway 93 was closed in both directions until around 1:30 pm local time.

This is what is looks like near the Hoover Dam. No cars or people allowed on the dam right now. NHP says a man in an armored truck is blocking all lanes. They’re unsure if he’s armed. We’ll update as we learn more. @FOX5Vegaspic.twitter.com/GyxWXdekAj