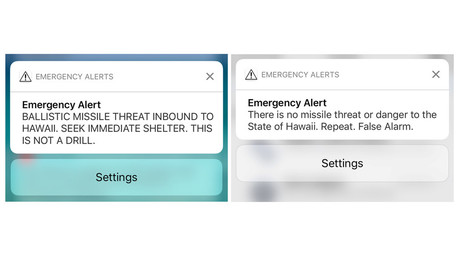 A man who suffered a heart attack following the false ballistic missile alert sent by a government agency to the cell phones of every Hawaii resident, is now suing the state for undisclosed damages.

The agency sent a follow-up notification 38 minutes later telling people it was a false alarm. An FCC investigation revealed that a now-fired HEMA employee sent the warning through the Emergency Alert System after mistaking an exercise for a real scenario. To make matters worse the false alarm happened during a time of heightened tensions between the US and North Korea.

The lawsuit, filed on Tuesday against the state of Hawaii and the then-administrator of HEMA, Vern Miyagi, claims the state failed to cancel the warning in a timely manner, causing substantial stress to Shields and causing his heart attack.

“The warning there was an imminent missile attack about to hit Hawaii was a substantial contributing factor in causing the heart attack,” said cardiologist John MacGregor, a professor of medicine at San Francisco School of Medicine and a doctor at the University of California, San Francisco Medical Center, in the lawsuit.

“Prior to that time, Mr. Shields had no known cardiac disease,” MacGregor added.

The lawsuit is joined by Shields’ girlfriend Brenda Reiche who said she suffered “emotional upset” from watching him almost die as a result of the false alarm. The couple say they were on their way to the beach on that Saturday morning when they got the alarm.

“Both plaintiffs believe this message to be true and were extremely frightened and thought they were shortly going to die,” the lawsuit reads according to AP. Shields said after he called his son and daughter about the warning he began to feel a painful burning in his chest.

AGAIN FALSE ALARM. What happened today is totally inexcusable. The whole state was terrified. There needs to be tough and quick accountability and a fixed process.

Shortly after, Shields visited a community center clinic and went into cardiac arrest. A doctor resuscitated him and he was transported to Straub Hospital where he was diagnosed with having had a heart attack.

Shields and his girlfriend are asking for unspecified damages. A spokesman for HEMA said they were going to “reserve any comment until we have had a chance to review the claims.”