As Islamic State is on the retreat in the Middle East, the mantra of ‘evil Russia’ is making a comeback in the hearts and minds of UK strategists. The new chief of the General Staff says Moscow is now a greater threat than ISIS.

Russia “indisputably” poses a greater threat to Britain and its allies than Islamists groups such as Al-Qaeda and Islamic State (IS, formerly ISIS), Gen. Mark Carleton-Smith said in his first interview since he was appointed chief of the General Staff. He also believes that Moscow is seeking to exploit Western vulnerabilities in cyberspace and in space. 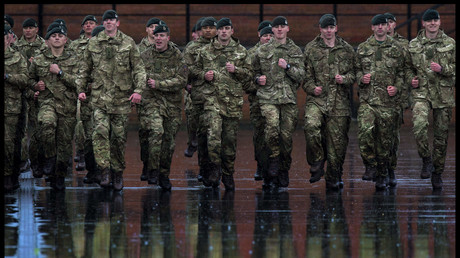 Moscow has demonstrated that it is “prepared to use military force to secure and expand its own national interests,” he told the Telegraph. Head-chopping Islamists apparently pale in comparison.

Carleton-Smith was speaking after visiting UK soldiers deployed to the Baltic country of Estonia, where ‘Russia scare’proponents have also been known to raise a few eyebrows.  The general provided some clues as to why the so-called “Russia threat” has risen back to the top. “The physical manifestation of the Islamist threat has diminished with the complete destruction of the geography of the so-called Caliphate,” he said, recommending that the London and its allies focus their attention on Russia.

Carleton-Smith, who led the 22nd SAS regiment during the Western-led invasions of Afghanistan and Iraq, has outlined what a “conventional military response” to Moscow would be – “the capabilities and coherence of the NATO alliance.”

Russian Foreign Minister Sergey Lavrov fired back on Saturday, saying:“That’s the worldview of a country that has spelt out its right to use force arbitrarily regardless of UN Security Council resolutions.”

In fact, some would argue that fanning fears over ‘evil Russia’ are instrumental in explaining or justifying increased defense spending. It wouldn’t be the first time the UK establishment has done so.

That aside, the latest tough claim from the UK is echoing a similar bizarre statement made by Barack Obama in 2014. Not mincing his words, then-US President also said that Russia was more dangerous than Islamic State. Well, at least that evil has been surpassed by Ebola, according to the American leader.

With the perceived threat from Russia, NATO has not passed up the opportunity to bolster its military presence all the way to Russia’s Western border, including the Baltic region where massive war games frequently take place.

Additionally, it emerged in September that London will send troops to the Arctic to “defend” the region from Russia (an internationally recognized Arctic country). Around 800 Royal Marine and Army commandos will be deployed to Norway every winter throughout the next decade according to Defence Secretary Gavin Williamson, who also did not hesitate to call the area the UK’s “own backyard.”