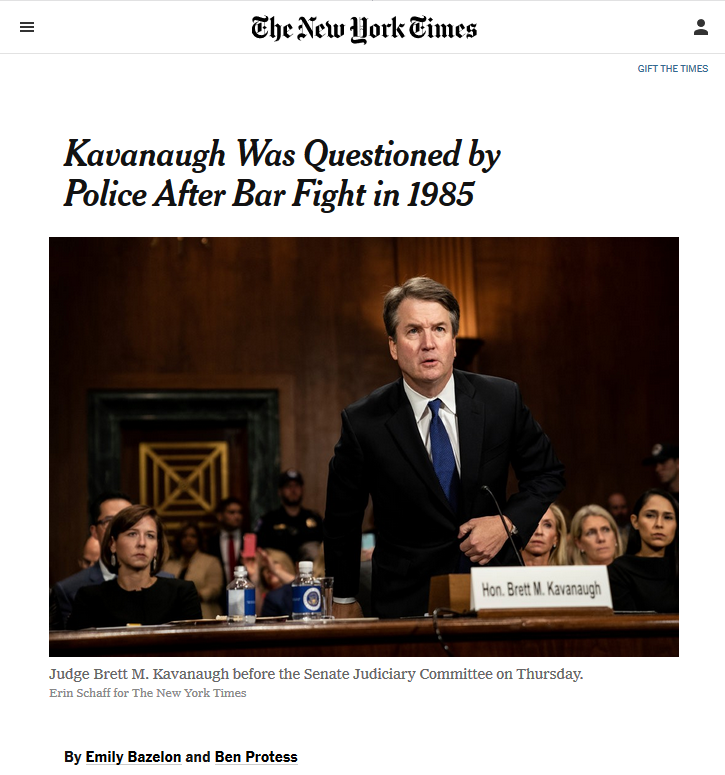 The New York Times apologized for allowing a reporter who had expressed qualms about Kavanaugh to co-author this piece (10/1/18).

What happens when a national newspaper cares more about the appearance of bias in its reporting than any actual evidence of it? Earlier this week provided an example, when the New York Times apologized for allowing one of its reporters to work on a story that no one has disputed or claimed contains a single inaccuracy.

The fight began when New York Times Magazine writer Emily Bazelon shared a byline on a straightforward story (10/1/18) based on a police report about Supreme Court nominee Brett Kavanaugh instigating a bar fight while an undergraduate at Yale. Definitely newsworthy, the article dovetailed with a number of other contemporaneous reports about Kavanaugh’s behavior while drinking, a specific point of contention at last week’s Senate hearing where Christine Blasey Ford accused him of sexually assaulting her.

But the Times piece came under fire, not for what it reported, but because Bazelon was the one who reported on it. Almost immediately, right-wing pundits began to target the story as biased because Bazelon had dared to publicly air her opinion on Kavanaugh’s nomination back in July. In two tweets this past summer, Bazelon, who is also a lecturer at Yale Law School, argued against Kavanaugh’s appointment as a “fifth vote for a hard-right turn on voting rights and so much more that will harm the democratic process and prevent a more equal society.” That she thought Kavanaugh unfit for SCOTUS and also assisted in reporting on his conduct back in college—from New Haven, Conn., where she is based, and where the incident took place—was seen as more evidence of a liberal plot against him, and sent conservative pundits into high-harrumph mode on Twitter and elsewhere. 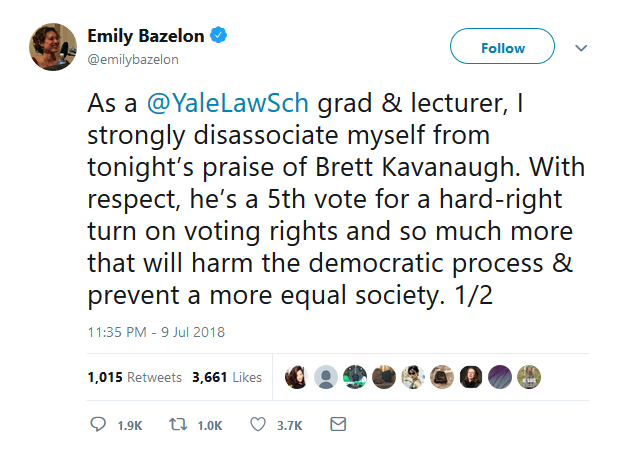 If you acknowledge that the nomination of Brett Kavanaugh matters, then you’re not supposed to write about him for the New York Times.

However, what was missing from all of these bias complaints was a single point of contention, a single refuted fact, a single example of biased reportage from the story. With no apparent smoking gun of bias against Kavanaugh—and would one surmise if there had been, this chorus of right-wing critics would have been singing it from the rooftops—one Weekly Standard contributor (Twitter, 10/2/18) decried Bazelon’s participation because of the potentially exculpatory smoking guns she may not have included.

Note that the Times story posted photos of the original New Haven police report and that the White House, as well as a friend of Kavanaugh involved in the assault, were contacted by the paper and chose not to comment, presumably withholding possible exculpatory smoking guns of their own. This obviously disingenuous concern trolling convinced at least some mainstream media reporters, however. Huffington Post contributor—and fellow New York Times Magazine writer—Yashar Ali (Twitter, 10/1/18) tut-tutted that Bazelon’s co-byline on the story was “not a good look.”

What’s really at work here is an orchestrated right-wing pushback against any reporting that looks into Kavanaugh’s past and how it might inform the veracity of his testimony—as well as that of Ford and the other accusers. Notably, just days before Bazelon co-authored Monday’s story, she had written an op-ed for the Times (9/28/18) calling for a “neutral investigation” into the allegations of sexual misconduct by Kavanaugh. Her justification for this: her past reporting on sexual assault victims and those accused of it, and how the Kavanaugh hearings have echoed it. Imagine that, a reporter leveraging his or her subject matter expertise to call for a better process for finding the truth.

In fact, the targeting of Bazelon highlights one of the biggest shibboleths underwriting the corporate press’s “objectivity” model—this notion that holding strong, personal opinions about public officials inherently compromises one’s ability to report on those same officials fairly and accurately. That news organizations would expect reporters and editors to spend years becoming subject matter experts on politics and policy—or jurisprudence and sexual harassment—but then demand that they evince no value judgments as a result of all that effort is, to state it plainly, absurd.

If the gormless, falsely balanced reporting that results from this kind of institutional self-censorship is the “view from nowhere,” as NYU professor Jay Rosen dubs it, then the mainstream journalists who are consigned to produce it must likewise operate as view-less nonentities—public-facing ciphers about which readers know almost nothing of consequence. And this culture of personal political omertà among reporters and editors is exactly how corporate news mastheads want it.

But such an unreasonably and unnecessarily rigid standard creates a moral hazard that is unfair to not only journalists but readers as well. It creates a distorted sense of incentives, where media figures can nurture strong biases and prejudices—and even get routinely criticized for playing to them in their work—but still evade professional accountability, because they’re careful to never let their “objectivity” mask of their public persona slip. It’s an upside-down reward structure, as I noted in this Nieman Reports essay:

However, this notion of certifying journalists’ neutrality by concealing political opinions seems shortsighted and hypocritical, because it creates a distorted ethical landscape. By choosing to push these opinions into the shadows, the press merely perpetuates a façade of fairness and widens its detachment from the public in an era where, ironically, it purports to hold itself more accountable to its readers and fights for more transparency from those it covers….

News organizations should realize that what sets their content apart is not their staff’s eschewing of a campaign yard sign, but how they employ their skills to produce better reporting. Credibility, rather than a vast publishing infrastructure, is the press’s authority today; reporters having a personal point of view should not prevent them from producing fair and accurate coverage.

Sadly, but not surprisingly, the editorial leadership of the New York Times disagrees. On Tuesday, it apologized for Bazelon’s role in a surreal, telling statement reported by the AP (10/2/18). Though Times spokesperson Eileen Murphy emphasized that “the story is straightforward and fact-based and we fully stand behind it”—again, not a single critic has refuted any facts or disputed any quotes from the story—Murphy also claimed the paper made an error in judgment when it assigned Bazelon to it, bizarrely adding as her reason that Bazelon is “not a news reporter.”

This, too, is another corrosive myth that eats away at the public trust in establishment journalism. The notion that there exists a pure-bred species of “straight” news reporters, who can expunge all subjective thoughts from their mind and instead churn out pristine stories free from any personal or partisan leanings. (And within this group there is an even more sanctimonious subspecies that goes so far as to swear off voting—Extra!,  1–2/07.) These alleged news automatons are more often blinded to their real biases by their own professional piety. But in most corporate newsrooms, they are routinely prized—and promoted over—ideologically promiscuous journalists like Bazelon, who dare to openly acknowledge their beliefs and use them to inform their arguments and reporting, which readers can then judge for themselves. 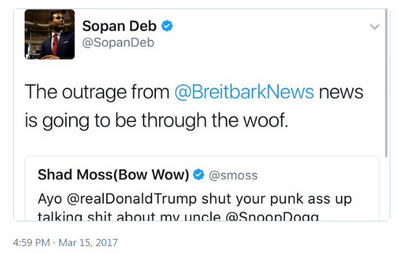 The dog pun that prompted an apology from the New York Times‘ public editor.

Of course, this isn’t the first time the Times has unceremoniously thrown one of its own under the bus after a bad-faith online harassment campaign from conservatives. Just last year, alt-right provocateur Mike Cernovich and others targeted Times culture reporter Sopan Deb for making a dog joke in a quote tweet of rapper Bow Wow’s vulgar insult of First Lady Melania Trump; Deb remarked that “the outrage from @BreitbarkNews is going to be through the woof.” (Breitbark News is a parody account that tweets about dogs in the style of Breitbart.) Despite Cernovich’s ludicrous and disingenuous claims that the quote tweet proved Deb endorses “rape culture” and “human trafficking,” and that the paper thinks “slavery is hilarious,” then–Times public editor Liz Spayd sided with the trolls and chastised Deb for his comment on Twitter (New York Times, 3/17/17).

In other words, mainstream news organizations still haven’t learned that bad-faith critics, particularly those on the right, will always find something—anything—from within the press’s broken objectivity model with which to attack them. Relatedly, the same right-wing critics of the Times’ Kavanaugh bar-fight article have leveled plenty of similar charges of left-wing media bias against the news coverage of Kavanaugh, even though none of those journalists have publicly opposed his SCOTUS nomination. One Washington Examiner (10/2/18) columnist even cheered Bazelon’s openness because, he claimed, more of this transparency will finally reveal the true depths of liberal media bias.

Of course, being vigilant for personal bias and systemic prejudice is a commendable goal for any news organization—would that more media mastheads took it seriously by actively hiring a more diverse staff at all levels. But fostering a professional ethical culture that enforces individual silence in exchange for a veneer of organizational neutrality represents a short-sighted and ultimately counterproductive strategy.

More and more, news audiences see right through this institutional arrogance. The better choice for restoring the relationship between public and press starts with allowing journalists to be more honest about their viewpoints precisely so they can ensure they remain fair in their reporting, as well as trusting that a public interested in facts and accuracy will respect this transparency and seek it out.