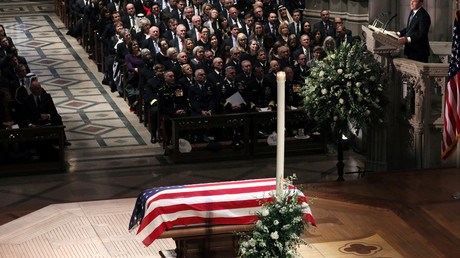 Tributes to former US President George H.W. Bush have flooded social media since his death last week — and judging by the outpouring of grief from mainstream media, journalists seem to be just as upset at his passing as anyone.

Instead of honest, balanced tributes which delivered a full picture of Bush’s life and legacy, the media seemed to favor hagiography, retelling the former president’s life with its blemishes removed.


The New Yorker was a particularly bad offender, with writer Thomas Mallon describing Bush as a character who had an “irreducible niceness” to him, a man who waged a “just” war in Iraq and a president who “presided over a brief but glorious Pax Americana.”

Another New Yorker journalist Susan B. Glasser, who described the late Senator John McCain’s funeral as a “meeting of the resistance” was back again for Bush’s sending off, this time to remind her followers how “extraordinary” a thing it is for a country to have two presidents from one family.

We forget just how extraordinary it is to have had two presidents in one family… George W. Bush missing from the row of POTUSes because he is also the son….

Glasser’s tweet raised a few eyebrows, however, with many noting that living in a “hereditary aristocracy” wasn’t actually such a great thing and that dynasty politics tends to be “indicative of rigid class structure with decreasing social mobility.”

CNN journalist Brenna Williams tweeted a GIF image of George Bush passing a piece of candy to Michelle Obama; a mirroring, she said, of their viral candy-passing moment which “warmed our hearts” at McCain’s funeral a few months ago.

The candy pass between Michelle Obama and George W. Bush, mirroring the one that warmed our hearts during the funeral of John McCain. pic.twitter.com/TDnunfnL4E

I’d bet anything that a PR consultant urged Bush to do this again. “Mr. Bush, we got huge numbers off that McCain candy. Let’s do it again at your father’s funeral!” https://t.co/HkoTOu1rHT

On NBC’s Today Show, one anchor expressed that she was still “recovering emotionally” from the few days surrounding Bush’s funeral.

The George W. Bush funeral is a reminder that Republicans are mostly good people.

It’s also a reminder that the Republican party is being invaded by a man with no morals, no heart, and no intelligence.

I beg you Republicans, please save yourselves while you still can!

On the other side of the pond, the Guardian newspaper sparked some Twitter outrage with its obituary, writing that the former president “did not put a foot wrong” during his devastating 1991 invasion of Iraq, which was described by the paper as an “impressive achievement.”

For the Guardian, George HW Bush’s devastation of Iraq was ‘triumphant’, ‘the president did not put a foot wrong’, ‘his most impressive achievement’, ‘After Bush’s masterly management of the first Iraq war’…. A very ugly apologetic for massive crimeshttps://t.co/rlhE9XDQtq

British TV presenter Piers Morgan was also saddened by Bush’s passing, chiding Comedy Central’s The Daily Show for posting a meme about the awkward meeting between Donald Trump and Barack Obama at “a great man’s funeral.”

Receiving less attention during a week of public mourning, however, were the uncomfortable bits of Bush’s legacy. The US airstrikes which massacred Iraqis fleeing Kuwait City in 1991, leaving a trail of human destruction known now as the Highway of Death, barely got a mention.

It was George Bush Snr. who ordered the bombing of the “Highway of Death” in 1991. The death toll remains unknown. Robert Fisk, the journalist, said he “lost count of the Iraqi corpses crammed into the smoldering wreckage or slumped face down in the sand”. pic.twitter.com/Fj8cnC4aAi

Nor did the shooting down of an Iranian passenger jet by the USS Vincennes in 1988, after which the ‘irreducibly nice’ Bush declared that he would “never apologize for the United States of America, ever — I don’t care what the facts are.”

One quote from George H. W. Bush shows the imperial hubris he embodied.

On July 3, 1988, the US shot down an Iranian civilian airliner, massacring all 290 passengers, including 66 kids.

Bush responded saying, “I will never apologize for the USA. I don’t care what the facts are” pic.twitter.com/0LC4K44w6D

The Bush obituaries also conveniently left out numerous recent allegations of inappropriate touching and groping of women that had cropped up during the height of the #MeToo movement.

hey everyone after receiving a barrage of angry replies I’d just like to apologize for not caring about the tragic passing of George H W Bush. I hope this means you forget about my Tweets as quickly as you forgot about his many sexual assaults https://t.co/Dh8fbfpnqj

It took the Democrats/liberals almost 20 years to even *begin* to address Bill Clinton’s immoral and even criminal behavior towards women. But here @mattyglesias devotes over 250 words to the “groping” allegations against Bush that no one even brought up until a year ago. https://t.co/Iaa7AgBQuf