The two leaders talked about trade and the migration problem in Libya. According to CNN’s anonymous ‘sources familiar with the call,’ it was “just bad, it was terrible.”

“Macron thought he would be able to speak his mind, based on the relationship,” the source said. “But Trump can’t handle being criticized like that.”

The call took place on the same day that the Trump administration slapped import tariffs on steel and aluminum from Mexico, the EU, and Canada. The tariffs were widely condemned, and – in a public statement before the call – Macron called them illegal and “a mistake on many points.”

“It is a mistake because it responds to a worldwide unbalance that exists in the worst ways through fragmentations and economic nationalism,” he said. “I prefer to say things directly and not through the press; and I will tell him what I told you, which are my convictions that he knows already.”

Macron stressed that there would be a European response, and the EU announced on Friday that it would cease trade negotiations with the US and slap retaliatory tariffs on $3.3-billion worth of American products, including orange juice, peanut butter, and Harley Davidson motorcycles. 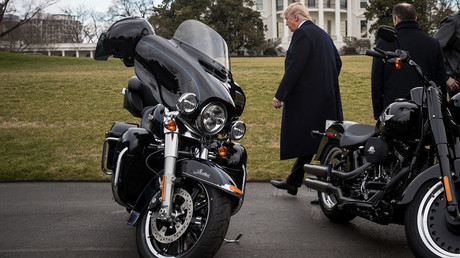 Macron had perhaps been hoping to leverage his close relationship with Trump to sway him on trade. After sharing an extended, white-knuckle handshake at a NATO summit in Brussels last year, the two leaders had developed a ‘bromance’ of sorts that only seemed to have deepened when Macron hosted Trump in Paris for last year’s Bastille Day celebrations.

While Macron and Trump fundamentally disagreed on several issues, most notably climate change and trade, the US president has described his French counterpart as “perfect,” “a great guy,” and “a friend of mine.” Macron has boasted of his ‘Trump whisperer’ abilities, claiming he has a “very direct relationship” with the US president, and that it was he who convinced Trump to keep US troops in Syria “for the long term.”

Nevertheless, Macron has failed to change Trump’s mind before. During his much-publicized trip to Washington this April, he had attempted to convince Trump to remain party to the JCPOA, or Iran deal. At the end of the trip, however, Trump announced that he would be pulling the US out of the deal as originally planned.

As the fallout from the Trump administration’s new tariffs continues, British Prime Minister Theresa May is also expected to speak with Trump by phone on Monday.