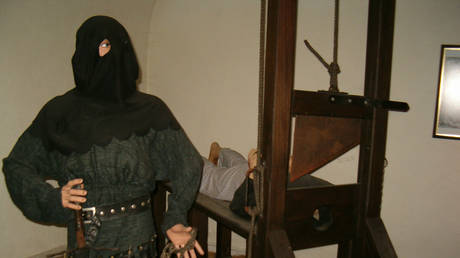 “She should be let go, she should be fired, end of story,” Ryan opined on Thursday night. “When there is a lack of credibility there, you have to start lopping the heads off…she needs to go.”

Adding a delicious layer of irony, Ryan went on to blame Sanders for threats against journalists.

“She’s calling us fake,” Ryan said. “I have to have security because of being called fake and a loser and all sorts of things from that White House.”

Ryan’s colorful condemnation came after Special Counsel Robert Mueller’s report claimed Sanders misled the public on the firing of former FBI Director James Comey, claiming Comey had lost the support of rank-and-file FBI agents. Sanders stood by her claim, despite admitting to Mueller that it was “not founded on anything.”

Was Ryan’s ‘off with her head’ a sinister call for violence or a colorful euphemism? Either way, Sanders’ father, former Arkansas Governor Mike Huckabee, stepped in to defend his daughter.

“Will the White House Correspondents’ Association revoke April Ryan’s credentials?,” he tweeted. “If not, they are gutless tools.”

Will the ⁦@whca⁩ revoke April Ryan’s credentials? If not, they are gutless tools. CNN’s April Ryan Says Sarah Sanders’ Head Should Be “Lopped Off” https://t.co/8fdYiOzggf

Ryan responded, warning the Arkansas Republican that “If anything happens to me or mine or anyone connected to me, you and your daughter and this administration will be held accountable!” Ryan also warned Huckabee that “My people see you and will do the same for you!”

As I thank God this day and for his sacrifice as you should be doing, I have a warning for you! If anything happens to me or mine or anyone connected to me, you and your daughter and this administration will be held accountable! So you better stop now! https://t.co/oUpSVVbLx2

You sir need to sit down. You gave me a veiled threat not long ago. You call yourself a man of God? Boy bye! As your people come for me! My people see you and will do the same for you! https://t.co/M72QQACjqV

The exchange drew popcorn munchers on Twitter, with the Right up in arms. “April Ryan literally called for @PressSec’s head to be ‘lopped off’ and is now playing the victim because her dad called for her credentials to be revoked,” Republican strategist Caleb Hull tweeted. “In what world is this ok?”

How do you identify legitimate criticism vs. “inciting violence” with the left’s new standards?

April Ryan literally called for @PressSec’s head to be “lopped off” and is now playing the victim because her dad called for her credentials to be revoked.

In what world is this ok? pic.twitter.com/Dp8cpw2oQb

Now that CNN’s April Ryan has threatened Sarah Sanders does the @WhiteHouse have grounds to pull her press pass?

I’m paraphrasing, but I did enjoy April Ryan telling Mike Huckabee to sit his ass down today.

Although combative press conferences are commonplace in President Donald Trump’s White House, Ryan has a long history of verbal spats with Sanders and the Trump administration. Most famously, Ryan sparked the #piegate micro-scandal when she first claimed Sanders lied about a pecan pie she tweeted a photo of, then accused Sanders of poisoning a pie for Ryan as revenge.

We truly live in the golden age of Washington journalism.