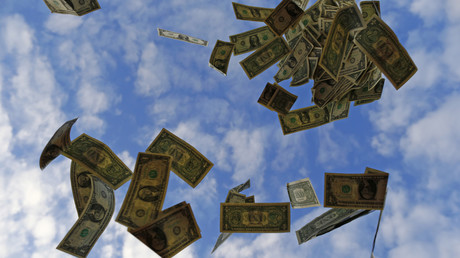 Chaos ensued on a New Jersey highway on Thursday morning after an armored Brinks truck spilled cash onto the road’s westbound lanes, causing multiple crashes as commuters rushed to pocket what they could.

Videos posted on social media show motorists abandoning their cars on Route 3 near the Metlife Stadium just outside New York City and scrambling to pick up as much cash as possible.

The incident happened at around 8.30am, peak morning rush hour, likely providing a happier-than-usual start to the working day for the lucky looters.

“This is super dangerous, everybody’s just out of their cars picking up money,” a woman can be heard saying in a video posted online by Sabrina Quagliozzi.

A man wearing a Brinks security company uniform, presumably the driver of the money-leaking truck, was also seen running around the highway trying to pick up the money. Police said multiple crashes were reported due to the chaos caused by the incident.

NorthJersey.com reported that a malfunction with the rear door of the truck had caused the incident. East Rutherford police said they did not know how much money was unaccounted for — and unfortunately for anyone who managed to grab wads of cash, the police department is advising people to promptly give it back.

Police captain Phil Taormina warned that people “can be arrested” for this, but acknowledged that the “hard part” is actually figuring out who took it in the first place.