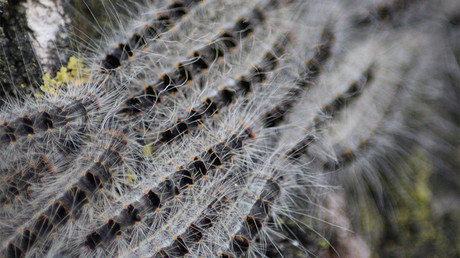 London’s urban environment might not seem like the ideal home for nature’s critters. However, a toxic caterpillar has moved into the British capital, and it’s capable of causing skin rashes, eye irritation, and breathing issues.

Caterpillars of the oak processionary moth (OPM) were seen emerging from eggs in southeast England in mid-April, according to the UK’s Forestry Commission. The biggest infestations have been spotted in the Greater London area.

The caterpillars have 62,000 hairs, each of which contains the protein thaumetopoein. That protein can cause skin rashes, sore throat, breathing difficulties, and eye problems.

Symptoms can appear if humans or animals touch the caterpillars or their nests, or if their hairs are blown into contact by the wind. Even coming close to the nests is dangerous, the Forestry Commission warns.

“The caterpillars can also shed the hairs as a defense mechanism, and lots of hairs are left in the nests, which is why nests should not be touched without protective clothing,” the Forestry Commission wrote in a statement.

Trees in the area were treated with a biopesticide on April 23. The treatment is expected to continue until late May or early June. After that point, the caterpillars will be too large to be affected by its “preferred treatment product.”

In July, the caterpillars will congregate in their nests to pupate into adult moths, a process which can take up to one month. Adult OPMs will emerge from the pupae in mid to late summer. They live for an average of just three days, during which time they mate and lay their eggs in healthy oak trees, continuing the cycle.

The Forestry Commission has urged residents not to approach the caterpillars or their nests, or to let animals do so. They have been asked to report any sightings of the critters or their nests.