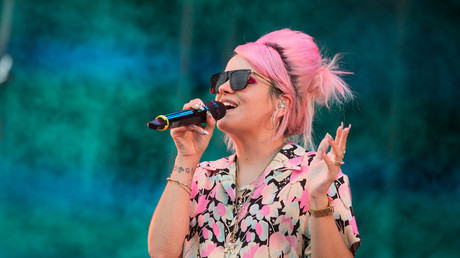 TV presenter Piers Morgan and pop star Lily Allen have been engaging in a Twitter spat about the glamorization of guns, after the ex-Mirror editor challenged the British singer on why she would “wear a machine gun necklace.”

Allen, who was pictured at the weekend performing at a music festival in London with an AK-47 machine gun necklace, responded to the outspoken TV presenter by insisting “I’ll stop wearing the necklace when you apologize for hacking the phones of dead children. Deal?”

I’ll stop wearing the necklace when you apologise for hacking the phones of dead children. Deal ? Calling me reprehensible for wearing a necklace. https://t.co/2W6CUEk73K

Morgan reminded Allen that it was another national newspaper that was embroiled in that scandal and not his former paper, the Daily Mirror. He asked the singer again why she would wear such a necklace ‘when gun violence was on the rise in her city of London.’

That was another newspaper.
Now, let me try again: why do you wear a machine gun necklace around your neck when gun violence is on the rise in your city? https://t.co/TldRjwsrJI

The apparent error from Allen didn’t seem to put her off her stride in fighting back against Morgan’s attack on her choice of accessory. She returned with an apology, claiming that she wears the necklace because “I like it,” and then reminding Morgan of why he was fired from the Daily Mirror as editor, asking: “Why did you publish deliberately concocted fake images to smear the British army? That’s not very patriotic Piers?”

Thanks for clarifying that, I apologise. I wear the necklace because I like it. Why did you publish deliberately concocted fake images to smear the British army ? That’s not very patriotic Piers ? https://t.co/IJLE510S4R

There was strong support on social media for Allen, with some Twitter users telling Morgan to “stop policing fashion,” while others suggested the TV presenter’s profile picture ‘glamorized cigarettes/cigars’ and claimed his ego stops him from doing anything productive on the issue of gun violence.

It’s a necklace. Stop policing fashion when there’s clearly no motive to it.

Why are you glamourising the use of cigarettes / cigars in your pic? Around 100,000 people die in the UK every year from smoking related illnesses.

He’ll say and do the absolute minimal that he knows will get him trending on twitter. Being controversial is his way of doing that. It’s far easier than rolling his sleeves up and doing something proactive. The man is a disgrace to journalism. He’s Katie Hopkins in shiny shoes.

It comes after Morgan hit out at Manchester City and England footballer Raheem Sterling for having a gun tattoo on his leg, in addition to his GMB show receiving a social media backlash for asking whether “Sterling should step down from England’s World Cup squad following his decision to have a gun tattoo.”

There are calls for Raheem Sterling to step down from England’s World Cup squad following his decision to have a gun tattooed on his leg. Which side are you on? pic.twitter.com/thN3YekOiY

Allen concluded the altercation by telling Morgan that he should spend less time “provoking people like me and Raheem and more time lobbying his actual mates” who were in a position to do something about “cuts to policing and youth services;” insisting “Necklaces and tattoos are NOT the problem here.”