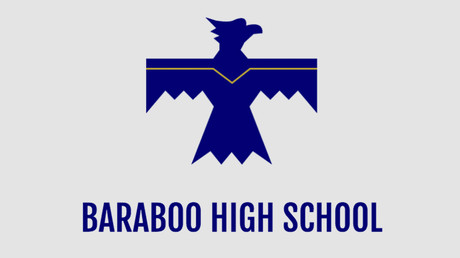 A Wisconsin school has found itself in the middle of a scandal after a photo surfaced with its students making a Nazi salute at a prom. No sooner had it apologized, when Twitterati noticed that its logo resembles a Nazi eagle.

The photo of some 50 young men in suits from Baraboo High School performing the stiff-armed ‘Sieg Heil’ greeting quickly went viral. It was taken during this spring’s junior prom and re-surfaced this weekend.

The photo puzzled Twitter users, who wondered what had made the teens extend their right arms in the air, reminiscent of the infamous Nazi salute.

If anybody from Baraboo High School in Wisconsin can clue me in on why it appears the entire male class of 2018 is throwing up a Sig Heil during their prom photos – that would be great.

“The context would be great,” wrote some angry people. One man said that these boys should visit World War II veterans in a nearby hospital and explain to them why exactly they dared to mimic the Nazi greeting.

Her original post shows that the photo was tweeted out from a now private account, stating, “We even got the black kid to throw it up #BarabooProud“.

Would love some context as to why this is remotely okay or normal for literally fifty kids at prom.https://t.co/VRIyeMqCvA

Given that the VA Hospital in Madison is less than an hour away, perhaps some of these young gentlemen would like to go there and tell some of the WWII vets there why they thought it would be fun to give a Nazi salute in a prom photo?

If I may make a suggestion as a historian:
Invite these young men + at least 1 parent for mandatory full-day event to 1) watch Allies’ documentary reels of Dachau & other camps, then 2) have discussions with WWII vets.
Anyone not attending won’t graduate. #DeNazification#Baraboopic.twitter.com/g2S06oRiEE

For many users, such a gesture popularized in Adolf Hitler’s Germany warrants expulsion both for students and teachers who were present. “Just publish the names of the mini Nazis and let the universe and college admission boards do the rest,” one person wrote.

Every student in that photo should be expelled with the exception of the kid who is scared to death. This didn’t happen overnight.

I hope every kid in that photo (along with their parents) is now worried about their college applications. They should be. Oh and doubtful they’ll be getting jobs once their names get tagged to the photo. Hope mommy and daddy don’t mind jr living at home until he’s 50.

EVERY adult who was there needs to be fired or banned from school. this picture circulated for MONTHS with no reaction from you. Only when it finally went viral and you saw bad publicity did you talk about doing something. Talk is cheap. SEE SOMETHING DO SOMETHING.

‘Extremely inappropriate gestures’ whenever somebody refuses to name the offense you know they have no real interest in correcting it.
Lol just publish the names of the mini nazis and let the universe and college admission boards do the rest😌

The Twitter storm forced school management to acknowledge the situation and apologize. It called the Nazi salute “an extremely inappropriate gesture,” adding that the photo had not been taken on school property or at a school-sponsored event. The loose explanation was greeted with bayonets by some users:

It was Junior Prom, literally in front of the school, the school porch is considered school property. Any other denies coming from the school is a lie as administration had always turned a blind eye to many reports that are now leaking and they’re facing massive embarrassment.

It was at your prom…even the photo album says BHS Prom…that’s not considered a school sponsored event???

As the outrage unfolded, school authorities and police joined the investigation. The ‘Nazi salute’ even reached Auschwitz-Birkenau Memorial and Museum in Poland, which denounced the image by saying that the world needs “to explain what is the danger of hateful ideology rising.”

Some people were surprised by the ‘Nazi salute’ case, since the school’s logo strongly resembles the eagle sometimes depicted over a swastika, which was once the formal symbol of Hitler’s Nazi Party.

I just did the same thing…..you might wanna change your logo………….holy hell. I know it is coincidence but best to clean this up now. pic.twitter.com/rcjdRqEyIE

“You might wanna change your logo,” read one tongue-in-cheek comment from a user. Though it is clearly a coincidence, the school should think about its logo in light of recent events, he added.

The ‘Nazi salute’ criticism was only the start of the school’s bashing on social media. New dirty details then began to emerge online – such as claims that some Latino, mixed-race or black students in the school are experiencing racial harassment.

I am being flooded with messages from students of this school about some of the guys in the group photo.

It sounds like there is a lot of racist bullying and the school tends to do nothing about it. pic.twitter.com/yvPZWI196A